Party leaders entered the final week of the federal election campaign aiming to define the ballot box question to suit their message, with Liberals and New Democrats targeting their pitch to progressive voters.

Speaking in Fredericton on Tuesday, Liberal Leader Justin Trudeau said the Oct. 21 election is a choice between cost-cutting Conservatives or a progressive Liberal government.

“In terms of the NDP and the Greens, remember this: If you want progressive action, you need a progressive government, not a progressive opposition. Voting Liberal is the only way to stop Conservative cuts,” Mr. Trudeau said.

NDP Leader Jagmeet Singh shot back at that message.

“The Liberals like to talk progressive, but they govern conservative,” he said in Toronto. “I want people to dream big. Don’t settle for less.”

The term “progressive” is loosely defined, but generally refers to centre-left policies and socially liberal viewpoints. Mr. Singh was asked Tuesday why he thinks the Liberal Leader is now frequently invoking the term on the campaign trail.

“I hope he’s encouraging people to vote for me,” Mr. Singh joked. “Because that’s the real progressive alternative for people.”

Mr. Singh was campaigning in Toronto-Danforth, the riding once represented by former NDP leader Jack Layton, but went to the Liberals in 2015. Mr. Singh then made a stop in Parkdale-High Park, another urban Toronto seat held by the Liberals that has previously been represented by the NDP.

Conservative Leader Andrew Scheer, who campaigned in Quebec on Tuesday, continued to seize on Mr. Singh’s coalition talk. He said the election comes down to a decision between a Conservative majority government or a Liberal minority government that is beholden to the NDP.

“There is now a clear choice between our party and an NDP-Liberal coalition, which will raise taxes, kill jobs, drive out investment [and] cancel big projects. I know Canadians won’t want that to happen and that’s why I’m very optimistic for Oct. 21st,” he said.

Mr. Scheer made the comments in Quebec City in the morning, where he pledged that a Conservative government would work with the provinces to eliminate internal trade barriers. His full Tuesday schedule included stops in Trois-Rivières, Saint-Marc-sur-Richelieu and La Prairie.

Mr. Trudeau started his day in Fredericton, where he discussed health care and access to abortion in New Brunswick. Mr. Trudeau then made his way across the Maritimes, with whistle stops in Riverview, N.B., and in Nova Scotia, including Masstown and New Glasgow. The final scheduled stop was an evening rally at a farmers market in Halifax.

Green Party Leader Elizabeth May campaigned in Kamloops on Tuesday.

Nanos Research did not conduct public opinion polling on Thanksgiving Monday. As a result, no new numbers for the daily tracking survey were released Tuesday morning.

The most recent results, which were released Monday, showed the Liberals and Conservatives tied at 32-per-cent support each. The New Democrats were at 19 per cent, the Greens at 9 per cent, the Bloc Québécois at 6 per cent and the People’s Party at 1 per cent.

The poll was sponsored by The Globe and Mail and CTV, with a total of 1,200 Canadians surveyed from Oct. 11 to Oct. 13. It has a margin of error of 2.8 percentage points, 19 times out of 20. Respondents were asked: “If a federal election were held today, could you please rank your top two current local voting preferences?” A report on the results, questions and methodology for this and all surveys can be found at http://tgam.ca/election-polls.

Nanos reported Tuesday on some regional trends, including the 905 region of Toronto suburbs that has historically played a key role in determining federal elections. As a note of caution, regional numbers have a higher margin of error because of a much smaller sample size. Also, the results include responses that are not as recent as the national three-day rolling survey.

Nanos had previously found that a 16 percentage point Liberal lead in the 905 during the first week of the campaign had fallen into a virtual tie with the Conservative Party in the second week, a period that overlapped with the controversy over images of Mr. Trudeau in blackface in 2001 and earlier. However, more recent survey results covering the week that ended Oct. 13 show the Liberals have bounced back.

The most recent numbers for the 905 show the Liberals in front with 43-per-cent support, followed by the Conservatives at 30 per cent, the NDP at 16 per cent and the Greens at 9 per cent.

The most recent survey of the region included 329 respondents. The margin of error is plus or minus 5.5 percentage points, 19 times out of 20.

With a report from Kristy Kirkup in Quebec City 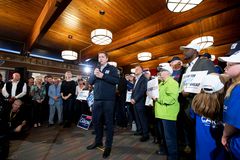 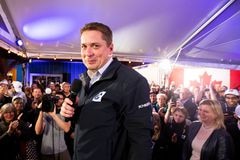 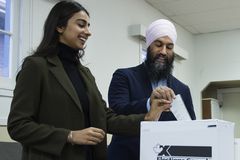 Follow Bill Curry, Michelle Carbert and Janice Dickson on Twitter @curryb @michellecarbert @janicedickson
Report an error Editorial code of conduct
Due to technical reasons, we have temporarily removed commenting from our articles. We hope to have this fixed soon. Thank you for your patience. If you are looking to give feedback on our new site, please send it along to feedback@globeandmail.com. If you want to write a letter to the editor, please forward to letters@globeandmail.com.
Comments