Prime Minister Justin Trudeau is facing fresh calls to end arms exports to Saudi Arabia after a United Nations panel named Canada for the first time as one of the countries helping fuel the war in Yemen.

A coalition of 39 human-rights, arms-control and labour groups, including the Public Service Alliance of Canada, which is the largest union in the federal government, have signed a letter urging Mr. Trudeau to stop arms sales to the desert kingdom.

Combat vehicles of the kind that Canada sells to Saudi Arabia – in a deal brokered and approved for export by the federal government – have been spotted in the Yemeni conflict, in which Riyadh is leading a fight against Houthi rebels believed to be supported by Iran.

The letter is dated Sept. 17, and the coalition of signatories said this is the first anniversary of Canada’s accession to the global Arms Trade Treaty, an accord intended to bring uniform standards to the international sale of conventional weapons.

However, they said in the past calendar year, Canada’s arms exports to Saudi Arabia more than doubled. Canadian shipments of military goods to Saudi Arabia hit a record high in 2019, almost entirely owing to a $14-billion contract to sell light armoured vehicles (LAVs) to the kingdom. Canada exported nearly $2.9-billion worth of military equipment to Saudi Arabia last year, nearly all of it LAVs made in London, Ont., by a subsidiary of U.S. defence contractor General Dynamics Corp.

Arms shipments to Saudi Arabia now account for more than 75 per cent of Canada’s military exports to countries other than the United States, the groups say.

Saudi Arabia has one of the worst human-rights records in the world. Rights group Amnesty International’s 2019 report said authorities there “escalated repression of the rights to freedom of expression, association and assembly” and “harassed, arbitrarily detained and prosecuted dozens of government critics, human rights defenders, including women’s rights activists, members of the Shi’a minority and family members of activists.”

Last week, in a report for the period ending in June, 2020, the UN Human Rights Council’s panel of independent experts monitoring the conflict in Yemen included Canada for the first time on a list of countries selling arms to those fighting there: a coalition led by Saudi Arabia and Houthi rebels backed by Iran. It was the panel’s third report, and members said Canada was included because of the rise in arms sales to Saudi Arabia.

The countries identified in the report, which also include the U.S., Britain and France, “continued their support of parties to the conflict including through arms transfers, thereby helping to perpetuate the conflict,” the report said.

Cesar Jaramillo, executive director of the disarmament group Project Ploughshares, said the report is an embarrassment for Canada because the panel is a product of the rules-based international system that the governing Liberals and many Canadians have pledged to defend. This includes the multilateral agreements and institutions, including the UN, that were established after the Second World War.

“The Trudeau government, which prides itself on a foreign policy based on respect for the rules-based international order, human-rights protection and feminism, cannot ignore Canada’s dishonourable inclusion in this report," Mr. Jaramillo said.

The Yemen conflict is widely seen as a proxy war between Saudi Arabia and its regional foe, Iran. More than 100,000 people have been killed and millions are on the brink of famine, aid agencies say.

The letter to Mr. Trudeau said the Canadian government intends to publish a policy paper on feminist foreign policy in 2020. “Women and other vulnerable or minority groups are systematically repressed in Saudi Arabia and are disproportionately [affected] by the conflict in Yemen,” the groups said.

“Direct support of militarism and oppression, through the provision of arms, is the exact opposite of a feminist approach to foreign policy."

The coalition also asked Mr. Trudeau to draw up a plan with labour unions to support Canadian workers who would be affected by ending arms sales to Saudi Arabia. The Canadian government said as recently as June that the LAV contract with Saudi Arabia supports “thousands of jobs not only in Southwestern Ontario but also across the entire defence industry supply chain.”

Christelle Chartrand, a spokeswoman for the department of Global Affairs Canada, asked to comment on the letter, said “Canada remains deeply concerned about the situation in Yemen and supports a political solution as the only way to end the ongoing conflict.”

Ms. Chartrand said the department believes “Canada has one of the strongest export-controls systems in the world, and respect for human rights is enshrined in our export-controls legislation.” 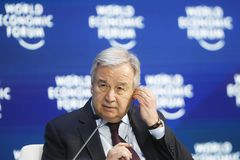