Prime Minister Justin Trudeau’s office sent out a highly critical missive recounting a phone call he held with Conservative Leader Erin O’Toole – but it turns out the call had yet to happen.

The premature statement about Mr. Trudeau and Mr. O’Toole’s conversation, sent late Friday afternoon, said the Prime Minister “raised concerns” about Conservative MPs for spreading “COVID-19 misinformation.” But staff in Mr. O’Toole’s office were quick to point out that the press release was referring to a call that was scheduled to take place the next hour.

The Prime Minister’s Office said the early release was an oversight, but its preplanned critical message of the meeting with the Leader of the Official Opposition exposes the growing partisanship surrounding the public-health crisis.

In the past month, the Conservatives have intensified attacks on the minority Liberal government, accusing it of leaving Canada at the “back of the line” for a potential coronavirus vaccine. At the same time, the Prime Minister has levelled attacks on the Tories, saying they are peddling conspiracy theories, and has consistently charged that they are “playing politics” during the pandemic.

Alex Wellstead, a spokesman for the PMO, said the e-mailed statement was “a mistake by staff.”

The PMO regularly releases “readouts” of Mr. Trudeau’s conversations with other world leaders and officials that outline the broad topics touched on during the calls. The pre-emptive debrief of the Prime Minister’s Friday call with Mr. O’Toole showed that the conversation was to focus primarily on updating the Conservative Leader about U.S. president-elect Joe Biden’s incoming administration. It also planned to touch on key issues such as COVID-19, climate change and the detention of Michael Kovrig and Michael Spavor in China.

But the final paragraph of the normally staid account contained eye-raising criticism of Conservative MPs who “recently downplayed the deaths of Canadians in Alberta due to COVID-19 and compared COVID-19 to the flu.”

Alberta MP Rachael Harder shared a newspaper column on her Facebook page this week that pointed out provincial statistics saying that just 10 of 369 Albertans who had died of COVID-19 as of mid-November were otherwise healthy, while Ontario MP Dean Allison described COVID-19 as “influenza” in a talk-radio interview.

After the call, the Prime Minister’s Office sent out a second readout that was almost identical to the previous release except it didn’t feature any criticism of the Conservatives. Instead, the final paragraph said the two leaders “discussed the COVID-19 pandemic, as well as vaccine distribution in Canada.”

Neither that statement, nor one from the Conservatives, mentioned the earlier flub from Mr. Trudeau’s office.

The Tory statement said Mr. O’Toole discussed the need for Canada to collaborate with the incoming Biden-Harris administration on a COVID-19 vaccine, the Keystone XL pipeline, the modernization of the NORAD agreement and environmental standards.

The Conservatives also announced that their leader is willing to back the federal Liberals’ net-zero emissions legislation provided it allows for the support of the oil and gas industry.

“Mr. O’Toole and Prime Minister Trudeau ended the meeting by reaffirming the importance of eliminating COVID-19 and by wishing their families well,” the statement from the Conservatives read. 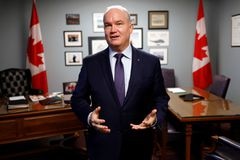