Donald Trump, the Manchurian President, tells bald-faced lies to his closest allies, and then laughs about it with his friends.

To be honest, that’s not fair. Mr. Trump is not a secret agent controlled by a foreign power bent on destroying the Western alliance. He just acts like one.

As you’ve probably heard by now, Mr. Trump made fun of Justin Trudeau at a fundraising event in Missouri on Wednesday. At what was supposed to be an off-the-record gathering that someone taped and leaked to the media, Mr. Trump told his fellow Republicans that he had disputed a claim by the Prime Minister – “nice guy, good-looking” – that Canada had no trade surplus with the United States.

The nations of the world are invited to negotiate with this man over whether they should be exempted from the steel and aluminum tariffs that Mr. Trump intends to impose. This is how he negotiates.

Mr. Trump is at heart a revisionist historian. He wants to rewrite the history of the postwar world.

According to the conventional history, at the end of the Second World War, an all-powerful United States crafted a Western alliance based on open trade and collective security backed by American military and economic power.

That American-led alliance revived the economies and societies of former enemies and allies alike in Europe and Asia, defeated Soviet socialism, powered decades of innovation in every field of knowledge, reduced extreme poverty from 55 per cent of the world’s population in 1950 to 10 per cent today and made American culture – its language, arts, capitalist business model and fondness for hamburgers – the global standard.

But in the Trumpian telling, the gullible Yanks were being taken for a ride the whole time. Allies dumped their products into the U.S. market while throwing up barriers to keep American goods out. They made themselves rich and left America poor. “Our allies care about themselves,” the President said in Missouri. “They don’t care about us.”

Look at this catalogue of grievances from the Missouri remarks:

South Korea: “We have a very big trade deficit with them, and we protect them.… We have right now 32,000 soldiers on the border between North and South Korea. Let’s see what happens.”

Mexico: “I don’t know that we can make a [North American free-trade agreement] deal because Mexico is so spoiled with this horrible deal.”

Canada: “They negotiate tougher than Mexico.”

NAFTA: “The best way? Terminate. Let’s start all over again.”

The world trading order: “World trade, it’s like a rocket ship, and much of it came right out of this country, got to stop it.” I have no idea, either.

The challenge for Mr. Trudeau and for Canada is to somehow get past the President, to negotiate a new NAFTA agreement that preserves an open border between this country and the United States while also preventing any new tariffs on steel, aluminum or anything else, hoping that once a new agreement is negotiated, those around Mr. Trump – including Republicans in Congress and in state houses – convince him to sign it. The odds are not great.

As for the Western alliance itself, all we can do is hold on and wait for another president, one who doesn’t lie to other leaders, and then brag about it afterward.

Trump boasts he made up trade facts in meeting with Trudeau
March 15, 2018 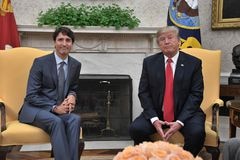 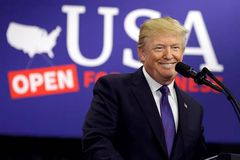