Marieke Walsh
Ottawa
Published May 27, 2021 Updated May 27, 2021
Comments
Text Size
Please log in to listen to this story. Also available in French and Mandarin. Log In Create Free Account

Moderna will ship two million COVID-19 vaccine doses to Canada in the first three weeks of June, but it will have to more than double that number in the second half of the month if it’s to meet its delivery targets.

The federal government announced on Thursday that it had received a delivery schedule for the first half of June, after last week asking the company for a precise schedule for June and July.

Next week, Moderna will ship 500,000 doses of the shots, and in the week of June 14, it will send another 1.5 million, Procurement Minister Anita Anand said in a statement posted to Twitter on Thursday. According to The Globe and Mail’s calculations, that means Moderna will have to deliver 4.6 million doses in the last two weeks of June to meet its target of delivering 10.3 million doses between April and June.

That target was already lowered from a previous commitment to send 12.3 million doses in that time period.

“Moderna has indicated that it will continue to ramp up its deliveries in the second part of June, with millions of additional doses,” Ms. Anand said in a statement posted to Twitter. However, Ms. Anand did not release total delivery numbers for the second quarter.

Last week, the U.S. company told The Globe it is “working toward achieving our vaccine delivery commitments for June.”

At a vaccine briefing on Thursday, Joelle Paquette, a director-general with Public Services and Procurement Canada, did not explain why Moderna is only providing short-term schedules. “We’re providing the information we have as it becomes available,” she said, adding, the company is “committed in providing doses to Canada, as soon as possible. And we continue to work with them to firm up their delivery schedule.”

Ms. Paquette said Moderna has had delivery disruptions and struggled to send larger shipments because of “certain difficulties” it has faced when increasing production.

Moderna is expected to play a significant role in the country’s vaccination campaign. The federal government has bought 44 million doses from the company, and 48 million doses from Pfizer-BioNTech. But while Pfizer has regularly and reliably sent large shipments, supply from Moderna has been less predictable.

Moderna has never sent deliveries that large, but it will need to send shipments at a similar scale if it is to meet its June target.

The different delivery schedules means Pfizer is the key reason why Canada was able to speed up its vaccination campaign in the past two months, but shipments from Moderna will be critical in the last three months of the massive vaccination effort.

Throughout April, Ms. Anand and Prime Minister Justin Trudeau repeatedly said Canada would receive between 48 and 50 million vaccine doses by the end of June. That would be enough to give everyone eligible their first jab and provide about half of those people their second shots.

But since last week the government has backed off that target. At issue is not just uncertainty around how close Moderna will get to meeting, or surpassing, its target, but also questions around how much AstraZeneca vaccine the government will receive by the end of June.

Moderna to provide up to 500 million doses of its COVID-19 vaccine to COVAX initiative
May 3, 2021 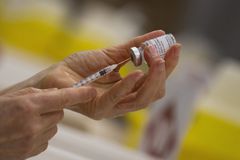 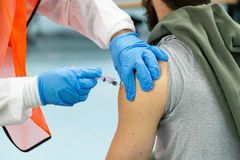 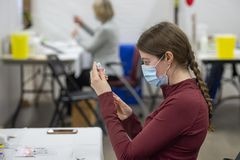