Delays in the delivery of Moderna vaccines are interrupting vaccination programs across the country, with health officials cancelling appointments, reducing clinic capacity, or holding doses in reserve to prevent disruptions.

The last timely shipment of the Moderna vaccine arrived in Canada on March 11, according information provided to The Globe and Mail by the Public Health Agency of Canada. Since then, shipments of hundreds of thousands of shots have arrived later than expected, and that trend will continue in the weeks ahead, PHAC said.

Before March 11, the last Moderna shipment to arrive in its entirety and on time was in January. Pfizer-BioNTech and Moderna cut deliveries in February as they adjusted production lines to significantly increase deliveries. Pfizer shipments have arrived like clockwork ever since. Moderna’s, while increasing in volume, are not yet consistent.

For example, 846,000 doses that were due to arrive in Canada between March 22 and 28 were fully delivered only on April 2. And the shipment that was supposed to arrive last week got here on Tuesday. Officials have already said a delivery of 1.2 million doses set for the week of April 19 has been shifted to the next week.

The Globe and Mail first asked Moderna for an explanation of the delays on Saturday. As of Wednesday, no statement was provided.

Procurement Minister Anita Anand told a House of Commons committee the company is blaming a backlog in its quality-control processes that started last month, and it is not related to restrictions on vaccine exports the European Union imposed.

“All of the permits from the EU are in place, that’s not the issue,” Ms. Anand said on Wednesday. “I have pressed them for fewer delays. It’s very important that we get that very tight in terms of the deliveries.”

The government has not said how much it is paying for the vaccines it bought, but Ms. Anand told the House of Commons committee that about $8-billion was budgeted.

On Tuesday, Prime Minister Justin Trudeau called the disruption a “small delay of a day or two.” But it has a longer knock-on effect in the provincial vaccination campaigns because it takes up to seven days for the federal government to distribute the Moderna vials once they arrive. For example, the vaccines that arrived on April 2 were fully distributed on April 9, and those that arrived on Tuesday will be distributed by Sunday.

“When we get them, we send them to the provinces immediately,” Mr. Trudeau told the House of Commons on Wednesday.

The inconsistent deliveries are hindering efforts to speed up the vaccination campaigns, although some provinces acknowledge the issue is outside the federal government’s control. The delays led to the cancellation of 7,200 appointments in Manitoba between April 12 and 15. The province is announcing new dates for the pop-up clinics that use the Moderna shot on Friday.

In the Greater Toronto Area, overall supply shortages meant some vaccination clinics were closed or their hours were dramatically cut, and in some cases thousands of appointments were postponed. Those issues were not only related to Moderna.

Scarborough Health Network in Toronto announced late Tuesday that up to 10,000 appointments at two mass vaccination clinics would be delayed until at least next week because of lack of vaccine.

Albert Lauwers, an executive vice-president at the Scarborough Health Network, said the changes were only partly due to the delayed Moderna vaccines. The hospital was told it would receive more shots because it is in a COVID-19 hot spot, but that didn’t happen, Dr. Lauwers said. That information was provided by the Toronto health sector vaccine leadership table, which is co-chaired by Toronto Public Health. He said per capita allocations of vaccines should be replaced by a needs-based distribution.

“I would send vaccines to the high-risk communities,” he said. Toronto Public Health said it planned clinics based on expected vaccine supply, including a large shipment of Moderna that did not arrive, and noted the province also expanded eligibility criteria this month, adding that the city is advocating for a more reliable vaccine supply for Toronto.

Other provinces have built buffers into their vaccination programs to avoid having to cancel appointments. In B.C., Provincial Health Officer Bonnie Henry said on Monday the province is taking a slower approach with administering Moderna because “it has not yet been reliably arriving,” something it doesn’t need to do for Pfizer shipments.

“It is one of those things we have to work on when we have an international supply,” Dr. Henry said.

To avoid cancellations, Nova Scotia, which has the slowest vaccine rollout of any province, books appointments only when delivery is confirmed, and takes about two weeks between receiving and administering the doses. But moving that slowly isn’t an option in COVID-19 hot spots like Alberta and Ontario.

Isaac Bogoch, an infectious diseases physician in Toronto who sits on Ontario’s vaccine distribution task force, said he doesn’t think the rollout should be slowed to avoid cancellations. “Cancellations stink, but I think we can rather than slow it down – streamline it,” he said.

The delay in Moderna shipments resulted in cancellations because clinics only have a one or two-day supply that lets them adjust to changes. “They’re not sitting on Moderna,” Dr. Bogoch said.

“It’s obvious we don’t have enough supply,” he said.

For example, the clinics at the University Health Network in Toronto have the capacity to vaccinate 35,000 people per week, but only about 2,000 Pfizer doses confirmed for each of the next two weeks.

On Wednesday though, Ms. Anand rejected any suggestion that the provinces face a supply shortage.

“They have enough supply for two weeks based on current rates of inoculation, 26.8 per cent of doses are not administered. I rest my case,” Ms. Anand told the House of Commons committee.

The Globe and Mail’s tracking shows of the doses distributed by Ottawa, 22.4 per cent were not yet administered as of Wednesday evening.

The NDP said the delays are another reminder that the country’s options are limited without a domestic vaccine supply.

“The unvarnished truth is that successive Liberal and Conservative governments have left Canadians incredibly vulnerable because of their failure to ensure domestic medicine production,” NDP MP Don Davies said. 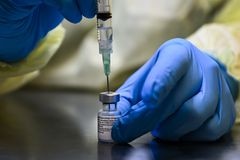 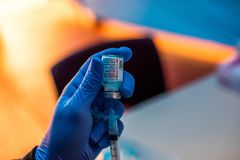 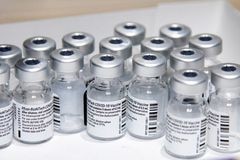