The American government is once again urging Canada to acquire U.S.-built fighter jets to replace its fleet of CF-18s, one day after it emerged the Pentagon recently threatened to pull the F-35 out of the $26-billion competition for new aircraft.

The contradictory messages from the U.S. government showcase how the Americans are trying to prevent a tendering process that would favour European manufacturers at the expense of either the Lockheed Martin F-35 or the Boeing Super Hornet.

The Canadian government is weeks away from launching a competition for 88 new fighter jets, with the two American firms set to enter into a competition against the Swedish Gripen and the Eurofighter Typhoon, which is built by a consortium that includes Airbus.

In a statement on Tuesday, the American government called on Canada to make sure its fighter jets can operate alongside U.S. military aircraft around the world. The “crucial” point, according to the American government, is Canada’s participation in the North American Aerospace Defence Command (NORAD) that controls the Canadian and American airspace.

Only U.S.-built fighter jets currently operate in NORAD and European aircraft would face technological hurdles in gaining the ability to fully integrate into the bi-national military alliance.

“We continue to believe in the importance of NATO and NORAD interoperability as a crucial component of Canada’s acquisition of defence assets,” said Joseph Crook, a spokesman for the U.S. embassy in Ottawa.

Mr. Crook added the American government remains “hopeful that U.S. firms are able to participate in open and transparent competition processes that can support Canada’s NATO and NORAD obligations, especially when it comes to co-operative engagement capabilities.”

U.S., Canada at odds over fighter jet sale as list of disputes grows

On Monday, the Macdonald-Laurier Institute published letters from American officials who warned their Canadian counterparts last year that the F-35 might be pulled from the competition unless Canada’s requirements for industrial benefits were modified.

The American government is concerned about Canada’s Industrial and Technological Benefits (ITB) policy, which requires the winner of the contract to invest the equivalent of the acquisition cost in Canada.

Built by Lockheed Martin, the F-35 is a stealth aircraft developed by an international consortium of allied militaries under a program that specifically rejects the application of traditional industrial benefits. Canada has been a member of the program since 2006.

In an interview after a cabinet meeting on Tuesday, Defence Minister Harjit Sajjan said he has sought to reassure the Americans by pointing out that the Canadian government will focus mostly on technical capabilities in deciding which aircraft to purchase.

He added that obtaining benefits for the Canadian economy is also important, while suggesting the matter will have less importance in the final weighting of the bids.

“This obviously factors into the equation, but the capability requirements for the Canadian Armed Forces is always the number one priority,” he said.

In a speech laying out his foreign-affairs policy on Tuesday, Conservative Leader Andrew Scheer said he will seek to modernize the NORAD alliance if his party forms the next government, including through the purchase of fighter jets that can defend North America alongside the U.S. fleet.

“I will act to select a new fighter jet through an open competition and make sure the new jets are interoperable with our American allies,” Mr. Scheer said.

Vice-Admiral Mathias Winter of the U.S. Navy said in a letter last December that Canada has received US$1.3-billion in economic benefits from its participation in the F-35 program to this point.

“The F-35 supplier team will submit an F-35 offer only if (1) the ITB requirement is waived entirely and (2) there is no future ITB obligation arising from selecting the F-35,” Vice-Adm. Winter said in his letter. 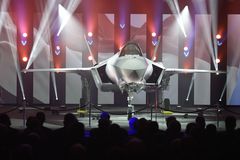 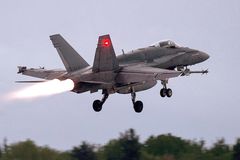