The United States has decided against sending U.S. troops to its border with Canada after the Canadian government said it “strongly opposed” the proposal designed to fight the COVID-19 pandemic.

The Wall Street Journal reported on Thursday evening that the Trump administration spiked the plan because of Canada’s objections.

Deputy Prime Minister Chrystia Freeland stressed earlier in the day that Canadian officials made their opposition to the idea “very, very clear to our American counterparts.”

“In terms of what we are doing about it, we are very directly and very forcefully expressing ... that in Canada’s view, this is an entirely unnecessary step which we would view as damaging to our relationship,” said Ms. Freeland during Thursday’s ministerial briefing on the novel coronavirus, which causes the respiratory illness COVID-19.

A senior Canadian official with knowledge of the plan said it would have stationed 1,000 troops about 30 kilometres from the border with ground-based sensor technology to track unauthorized crossings. This information would be relayed to border guards to intercept people.

Ms. Freeland said Canadian officials learned of the proposal a few days ago.

Although the plan was aimed at preventing irregular crossers travelling from Canada into the United States, far more people cross from the U.S. into Canada. Last week, Ottawa announced Canada and the United States had agreed to turn back anyone trying to cross the border on either side.

Clamping down on asylum seekers making irregular border crossings has been a big part of U.S. President Donald Trump’s agenda. Such efforts have usually been targeted at Mexico.

At a White House news conference on Thursday afternoon, Mr. Trump said the troops could also be used to stop illegal shipments of Chinese steel coming in through Canada to avoid his tariffs on China.

“We have a lot of things coming in from Canada. We have trade, some illegal trade, that we don’t like. … We don’t like steel coming through our border that’s been dumped in Canada so they can avoid the tariff,” the President said. “We’ve taken in billions and billions of dollars in tariffs on steel and much of it comes in from China, but they can come in through the Canadian border, too, so we’re always watching for that.”

Mr. Trump also suggested that putting troops closer to Canada would help even things out with Mexico.

“We have very strong deployments on the southern border, as you know, Mexico, and we had some troops up in Canada, but I’ll find out about that. I guess it’s equal justice, to some extent,” Mr. Trump said. “But in Canada, we have, we do have troops along the border.”

It was not immediately clear what Mr. Trump was talking about. The plan did not appear intended to help border guards search for illicit shipments of heavy metals. It was also unclear what troop deployment on the Canadian border the President meant.

The Canadian official said the U.S. troop idea originated with the Department of Homeland Security, which includes Customs and Border Protection, and had received some support at the White House and the Pentagon. But others in the White House, Pentagon and Homeland Security opposed the plan, the official said. The Globe and Mail is not identifying the official because they were not authorized to speak on the matter.

In a statement distributed by Homeland Security and attributed to an unnamed “senior administration official,” the Trump administration said it was “considering every option to … minimize health threats entering the country.” The official warned that, despite instructions to practice social distancing, the “risk of further spread of the virus is too high” not to take further steps.

The Nation magazine on Thursday afternoon published what it said was a leaked memo from Homeland Security to the Pentagon outlining the request. The memo asked for up to 1,000 Department of Defense “personnel” to deploy to the border with Canada and 540 for the border with Mexico. The troops would remain in place until Sept. 30, the memo says.

“Any unknown or unresolved illegal entries into the United States in between ports of entry have the potential to spread infectious disease,” reads the memo, sent March 19 from Juliana Blackwell, Homeland Security’s executive secretary, to her counterpart at the Pentagon, Captain Oliver Lewis. The memo specifies that “military personnel will not conduct civilian law enforcement activities” and will play a “support role” to border guards.

Former U.S. ambassador to Canada Bruce Heyman said the proposal is “entirely political” and not supported by any rationale.

“Just proposing this is highly dangerous. It’s dangerous in that you’re putting in Americans’ minds that there is an issue at the U.S.-Canada border, and it’s putting a relationship that is so important ... in some jeopardy," Mr. Heyman said. 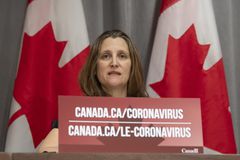 Some Canadians returning from abroad with COVID-19 symptoms could be federally quarantined
March 26, 2020 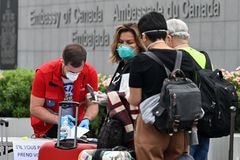 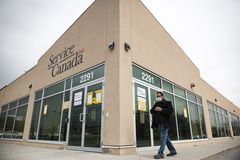