Venezuelan Canadians say family members hoping to visit Canada have been unfairly caught up in a soaring refusal rate for visitor visas, calling the federal government’s decision to deny them the necessary travel documents discriminatory.

It has become increasingly difficult in the past few years for people from abroad to visit Canada, according to a recent analysis of federal immigration data by The Globe and Mail. Statistics show the visitor visa refusal rate (excluding student visas) skyrocketed from 18 per cent of applications from all countries in 2012, to 30 per cent in early 2018. While the highest refusal rates are clustered in Africa and the Middle East, Venezuelan Canadians are now sounding the alarm over a similar trend in their home country.

The monthly number of rejected visitor-visa applications from Venezuela has more than doubled since the South American country started tumbling into a political and economic crisis. The Canadian government refused 216 visitor-visa applications from Venezuela in November, 2016; that number shot up to 468 in March, 2018. Although the refusal numbers fluctuated during that time – peaking at 634 in June, 2017 – the increase has been steady.

Gabriela Prada, a Venezuelan Canadian who lives in Gatineau, said she was shocked when Canada denied her mother and sister visitor visas this year, citing concerns they would not return to the deteriorating political situation in Venezuela. Ms. Prada said her family members were hoping to attend her daughter’s high-school graduation, with full intentions of returning to Venezuela after their visit – as they always have during prior visits to Canada. She insists they are legitimate travellers targeted by a discriminatory visa policy.

“They [the Canadian government] are penalizing people. They are treating everybody exactly the same,” Ms. Prada said. “What they are saying is because you live in this place, we are rejecting you.”

The federal Immigration Department said there have been no visa-policy changes for Venezuelan nationals. Spokeswoman Béatrice Fénelon said visa applications from around the world are assessed equally against the same criteria, including the purpose of the person’s trip, their economic situation and the stability of their home country.

“All applicants are given the opportunity to present their case by providing documentary evidence and any other relevant information to support their application,” Ms. Fénelon said in a statement. “Unless the officer is satisfied that the applicant is a genuine visitor, a TRV [temporary resident visa] cannot be issued.”

Conservative immigration critic Michelle Rempel, whose Calgary riding is home to a large Venezuelan community, said a number of Venezuelan Canadians have approached her with similar complaints about visa refusals for family members. She said those applications were also rejected over concerns the individuals would not return to Venezuela, despite never having overstayed their visas in the past.

Ms. Rempel said the Venezuelan visa issue raises a larger concern about the Liberal government’s immigration policies, which have been gripped by a surge in asylum seekers crossing illegally into Canada along the U.S. border over the past year.

“If the government is making decisions saying that there is political instability [in Venezuela] and people may be making asylum claims, then we have to start looking at why we are prioritizing asylum claims from people who have already reached the United States,” Ms. Rempel said.

Opinion
The Canadian visa process is broken. And it must be fixed
July 11, 2018 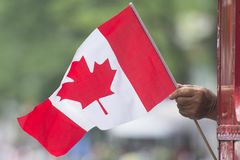 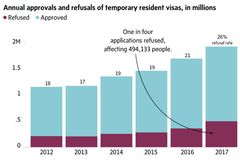