Venezuela’s opposition leader says Cuba could play a stabilizing role in the political and economic crisis in his country and is encouraging Canada to help enlist Havana to oust the Maduro regime.

Juan Guaido made the remarks during a visit to Ottawa on Monday – the latest stop on an international tour aimed at boosting support for his push to oust President Nicolas Maduro. Mr. Guaido said Cuba, which continues to back Mr. Maduro, could help support Venezuela’s transition to democracy, but said his country needs help encouraging Havana.

“We would like Cuba to be part of the solution but right now what they are doing is they are supporting the Maduro regime somewhat, but with the right support they could be part of a solution,” Mr. Guaido said in Spanish.

“We know that we can’t do it alone right now because of the crisis.”

Canada has supported the idea of Cuba playing a mediator role in the Venezuelan crisis. Former foreign affairs minister Chrystia Freeland raised the matter with her Cuban counterpart during a trip to Havana last year. Mr. Guaido said Canada’s continued engagement with Cuba is “fundamental” to finding a solution to the Venezuelan crisis.

“The talks that Canada has held with other countries, including Cuba, are very positive to find a solution and to move quickly toward a transition in Venezuela,” Mr. Guaido said during the joint press conference with current Foreign Affairs Minister François-Philippe Champagne.

“We’re talking about the next steps in order to understand how we can mostly quickly restore democracy and human rights in Venezuela," Mr. Champagne said in French. “We firmly believe that one of the best ways to get to this goal quickly is to have free, fair and democratic elections in Venezuela under international observation."

Canada’s interest in involving Cuba has put it at odds with the United States, which has a historically frosty relationship with the island state that has worsened under U.S. President Donald Trump. During a visit to Ottawa last year, U.S. Vice-President Mike Pence said Canada and the U.S. must work together to “expose the malign influence of Cuba within Venezuela.”

Canada is among more than 50 countries that recognized Mr. Guaido as Venezuela’s interim president when he swore himself into the role last year, in a direct challenge to Mr. Maduro. Canada has repeatedly urged Mr. Maduro to step down, calling his regime a “dictatorship.”

Venezuela’s economy has collapsed under the Maduro government, with inflation topping one million per cent in the past year. Facing widespread food and medicine shortages, more than 4.5 million people have fled Venezuela since 2015 – a number the United Nations refugee agency predicts will grow to 6.5 million by the end of 2020.

Mr. Guaido described the dire situation in his country, saying he was in Ottawa to “speak on behalf of Venezuelans who do not have a voice.”

“The people in Venezuela, they’re hungry, they are living in poverty and they need hope. There are patients who can’t get dialysis. They are dying because they do not have access to medical care and children don’t have water,” Mr. Guaido said.

“This is not one man’s fight. This is a fight of all Venezuelans."

Mr. Guaido defied a travel ban imposed by Venezuela’s pro-Maduro Supreme Court when he embarked on his international tour, which also included stops in Brussels, London and Davos, Switzerland. He said 11 members of his team have been in hiding since he left Venezuela and, amid concerns about the risks, vowed to return to Caracas soon. 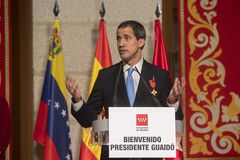 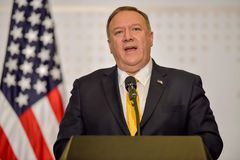 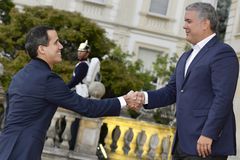