Via Rail will use its first new train procurement in decades to replace its core fleet of diesel trains with modern vehicles capable of operating in either diesel mode or purely electric power.

The requirement was included as part of an announcement on Monday that Ottawa is giving Via Rail Canada Inc. the green light to purchase up to 32 new train sets. The first delivery is expected for the spring of 2022.

The decision was first signalled in the Feb. 27 budget. No dollar amount has been announced for the purchase in light of the coming competition, but Via has previously said it would need about $1.5-billion for new trains.

The trains will operate in the Quebec City-to-Windsor corridor, which makes up about 94 per cent of the Crown corporation’s rail traffic.

In an interview, Via Rail president Yves Desjardins-Siciliano said he envisions an “off-the-shelf” purchase of train technology that has a proven record in cold climates.

Mr. Desjardins-Siciliano said it makes sense for Via to have the ability to use electric power where it is available while having diesel power to cover the gaps in between, given that commuter rail networks in Montreal and Toronto are both moving toward electrification.

“There are products from multiple companies that can meet those requirements,” he said.

Among the companies that build such “dual-mode” trains is Bombardier Transportation, which produces the ALP-45 dual-power locomotive for commuter rail systems in Montreal and New Jersey.

Bombardier’s rail division warned earlier this year that it may have to lay off staff at its plant in La Pocatière, Que., if new contracts aren’t found soon.

Britain recently launched an inter-city express rail program that uses dual-mode trains built by Japan’s Hitachi. Last year, the rail divisions of Siemens AG and Alstom SA merged in what was viewed as a response to the growing influence of China’s state-owned train maker.

Via says an independent fairness monitor will oversee the procurement.

Federal Transport Minister Marc Garneau and Mr. Desjardins-Siciliano announced the coming procurement on Monday at the Via maintenance centre in Toronto.

During the announcement, Mr. Garneau noted that the budget included an additional $8-million to support the continued in-depth assessment of Via Rail’s high-frequency rail proposal for the Quebec City-Toronto corridor.

That multibillion-dollar plan would include the purchase of dedicated tracks for Via’s passenger trains. Via’s trains regularly face delays because they share rail lines with freight traffic, which is given priority by CN, the owner of most of the rail network currently used by Via.

In an interview, Mr. Garneau said he hopes the studies will have produced enough information for the government to make a decision on high-frequency rail within a year. Mr. Garneau said the resulting projections for ridership and revenue could influence whether outside investors or the new Canada Infrastructure Bank play a role in funding the project.

“If there is a private-sector interest in partnering on this, then the infrastructure bank is an option,” he said.

University of Waterloo professor Jeff Casello, who specializes in urban transportation issues, said he supports the decision of Via and the government to favour dual-mode trains. In an interview, he said such an option is less costly than fully electrifying the network while reducing the negative effects of diesel emissions in urban centres.

“When you are asking someone to build a reasonably sized order of cars, there’ll be no shortage of competitors who are prepared to fill that order for you,” he said. 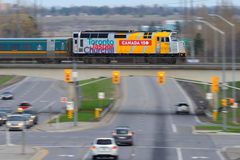