Vice-Admiral Mark Norman’s defence lawyer Marie Henein said Wednesday she will seek subpoenas for the Prime Minister’s former principal secretary Gerald Butts and Clerk of the Privy Council Michael Wernick to testify in court if they fail to produce documents the defence team requested in October.

Ms. Henein said at a pretrial hearing in Ottawa that because the defence has not seen a single document, she is concerned there has been a “lack of responsiveness” to the court order and to subpoenas that request thousands of documents and records the defence team says it needs to defend Vice-Adm. Norman.

The documents the defence is seeking, including e-mails, text messages and BlackBerry PIN messages, were supposed to be part of the defence team’s abuse-of-process motion that was scheduled for later this month, but Ms. Henein said it would be “impossible” to proceed because they have not received the documents and neither has Judge Heather Perkins-McVey.

Justice Perkins-McVey, the defence and Crown counsel agreed to reconvene on March 18, one day before the federal budget, for another update on the documents. Ms. Henein said if the documents have not been produced by that day, she will be seeking subpoenas for the top officials.

“If we don’t have this brought to conclusion, I’m going to be seeking subpoenas for Mr. Butts, Mr. Wernick, all these individuals from the [Privy Council Office] … to come before Your Honour and explain precisely what searches have gone on and where these documents are.”

Ms. Henein pointed out the defence’s notice of application was made in October.

“So we’ve been at this since October and this is a court of law, Vice-Admiral Mark Norman is on trial here,” she said.

“They have an obligation to be responsive. It is not an option, and so my respectful request is that we come back and report to you again and that at that time, if the responsive documents have not been fully provided to the court, I’m going to ask for those witnesses to be called and we’ll cross-examine them and they can explain in open court, to this court, why these documents haven’t been produced.”

In a series of tweets on Wednesday afternoon, the Department of Justice said the defence’s request for communications between the Prime Minister’s Office, the Privy Council Office and the former minister of justice is a new request not included in their Third Party Records Application from October, 2018.

Government lawyer Derek Rasmussen said the priority documents identified by the defence team will be provided to Justice Perkins-McVey on Wednesday to review on a secure laptop and she will decide whether they should be released to the defence team.

Ms. Henein said she was advised by Mr. Rasmussen that the responsive documents from Mr. Butts, Mr. Wernick, Prime Minister Justin Trudeau, the Prime Minister’s chief of staff Katie Telford, Defence Minister Harjit Sajjan’s chief of staff Zita Astravas are in the possession of the Department of Justice and they will be loaded onto a laptop for the judge to review.

Ms. Henein also said that she had requested notes, e-mails and correspondence from Paul Shuttle, lawyer for the Privy Council Office, and received a letter from him that she did not hand up to Justice Perkins-McVey because it was “completely and utterly useless.” 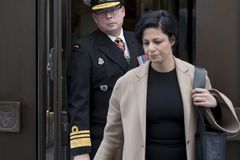