The protesters outside Justin Trudeau’s event had been simmering in the warming heat for an hour, chanting and swearing and screaming outrage, but eventually the chants cycled through to it.

In a Cambridge, Ont., industrial park, at the back entrance of a metal fabricator’s plant, angry folks were chanting the angry Trumpist line that was directed at Hillary Clinton in the 2016 U.S. presidential campaign.

On Friday, in Bolton, Ont., the Liberals had been forced to cancel Mr. Trudeau’s campaign event because vitriolic protesters made it seem that going ahead might not be safe. This time, the event did go ahead, late, though the more than 100 protesters outnumbered a couple of dozen police officers. And Mr. Trudeau stuck to his speech – mostly – through angry chants and car horns and sirens.

At some point, it seems like part of Mr. Trudeau started to like it. Not really like it – it wasn’t pretty – but like the fact that he had an ugly opponent out there, and he was carrying on. He had an opportunity speak against it. It gave him a platform to portray himself as a leader who has something to fight against. A foil.

The protesters all had one focal point, Mr. Trudeau, but a lot of different shouting points.

One protester, Paul Teixeira, 50, carried a yellow poster board sign that had a sweary message for the Liberal Leader, but the People’s Party supporter offered a run-of-mill list of complaints about Mr. Trudeau, such as the SNC-Lavalin affair and heavy public debt.

But there was a mix of others, against vaccine mandate or lockdowns or other things. One man who shouted at an RCMP officer wore a sandwich board that warned that “tomorrow” unvaccinated people won’t be able to hold a job, and “someday soon” people without “microchips,” will have no rights. Presumably those are the microchips someone is coming to implant in your brain.

The guy accusing Mr. Trudeau of leading a human trafficking ring was louder, and not alone in believing that conspiracy theory. At one point, the crowd broke into chants of “pedophile.” Several shouted that Mr. Trudeau is Fidel Castro’s son.

And just to be clear, this was not all in good fun. Several were angrily insulting police officers; one threatened to “breach the line” when an RCMP officer had told him it was private property; another, carrying a poster depicting Mr. Trudeau being hanged, swore at a Black plain-clothes police officer with a racist slur.

When Mr. Trudeau finally spoke – after Chrystia Freeland and the local Liberal candidate, Bryan May – he stuck to his speech, except once, while protesters’ sirens nearly drowned him out, when he remarked with a smile that the sirens can remind listeners there is a climate emergency.

The protests gave an edge to his usually blah-blah-blah talking points. The Liberal Leader has had a hard time articulating what the election is about, but the protesters gave him something new to point to while he reframed the same answers.

People have had a hard year, he said, but he is “resolute” and “firm” on the need to get people vaccinated and address climate change.

“And people who want to ignore science around vaccines, around climate change – they don’t get to choose how Canada moves forward. All Canadians get to step up and be heard in this election. And the choice couldn’t be clearer.”

A report that Ontario Conservative candidate Cheryl Gallant had warned constituents about climate lockdowns served as a way of allowing Mr. Trudeau to pivot to suggesting that Conservative Leader Erin O’Toole has not done enough to denounce conspiracy theories and misinformation about vaccines and climate change. So then Mr. Trudeau was calling for Mr. O’Toole, who denounced the protests, to do more to call out the kind of things that led to the protests.

That’s just rhetorical jousting, of course. It doesn’t provide Mr. Trudeau a new manifesto for another mandate. But the protesters who tried to drown him out with outraged calls for his arrest gave him something he could use, a foil to serve as a symbol of what he opposes. 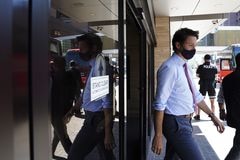 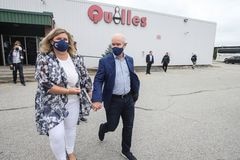 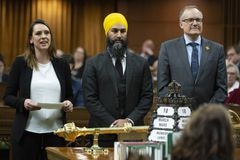