Hey! It’s Samantha and Jack, the editors of Well-Versed. We’re really glad you’re joining us for the next six weeks − we’ll be with you right up until the federal election. Each week, we’ll break down a new political topic, and this week, we’re getting you well-versed on housing affordability.

Housing is a fundamental need of every Canadian, and while the quality, availability and affordability of housing varies widely across the country, communities from coast to coast are feeling the squeeze from at least one of these concerns.

Most major Canadian cities do not have viable living options for minimum-wage workers, of which there are more than 1 million across the country. A July study from the Canadian Centre for Policy Alternatives found that there are few neighbourhoods where those workers could comfortably afford an average-priced one-bedroom apartment − only 9 per cent of 795 neighbourhoods studied, to be exact.

Well-Versed is The Globe and Mail’s twice-weekly newsletter that aims to jump-start your conversations about the 2019 federal election. Write to us about which issues you want to hear about and express your opinion on the policies and people we’ve examined. Go here to sign up.

And what exactly constitutes “affordable” housing? Definitions are contentious, and last month big-city mayors called on the federal parties to overhaul the term “affordable” when it comes to housing costs to include the cost of commuting from cheaper suburbs into urban centres where most of the jobs are.

Quality is also a concern: a study from the Federation of Canadian Municipalities notes that a huge proportion of purpose-built apartments are old and in need of renovation, with 76 per cent of all rental units being more than 35 years old.

When we talk about the problems Canada faces in the realm of housing, what do we mean? Let’s break it down:

Canada’s rental market has such a low overall vacancy rate that many can’t even find a place to dicker with a landlord over prices. Toronto and Vancouver tend to hog headlines about vacancy with their rates sitting at about 1 per cent, but are by no means the be-all-end-all of the issue; many other areas of the country face the same problems. For example, Prince Edward Island’s apartment vacancy rate plunged to 0.3 per cent in 2018.

To give you a better picture, a vacancy rate generally regarded as “healthy” for renters is about 3 per cent.

Research shows that rental tenures are getting longer and the mobility rate of renters is decreasing, meaning that Canadians are sticking with their rental situations longer as opposed to moving around. This could be for a variety of financially motivated reasons, but many say they’re just clinging to affordable rent for as long as they can.

Airbnb is exacerbating the low-vacancy issue as not just owners, but “commercial operators” − those operating multiple listings − increasingly turn to the website instead of renting traditionally. A recent McGill University report found that more than 31,000 homes (including condos) were rented out so often on Airbnb in 2018 that they were likely removed from Canada’s long-term rental supply. That amounts to about 1.5 per cent of residences across the country that were built for the rental market.

Globe reporter Matt Lundy profiled the Canadian housing crisis, which he says has been “decades in the making.” He points out that because of all of these overlapping issues, “renters are often forced to stay in substandard, abusive or cramped conditions.” If you’re curious as to how we got to this place, read his piece.

Rents are rising across the country: data from Statistics Canada this year revealed that the rent component of the Consumer Price Index (an inflation indicator) jumped this year in the largest leap since 1992.

Intimately tied to rent prices are property values themselves, and Canadian real estate markets have gone gangbusters in the past decade.

This isn’t just an urban problem; a recent Globe and Mail investigation​ found that the most financially stressed neighbourhoods in the country are in the suburbs, where the dream of a green lawn and white picket fence is no longer a viable reality. Canada’s total household debt has hit a record $2.2-trillion, and Canadian households are carrying debt equal to 177 per cent of annual disposable income.

As personal finance columnist Rob Carrick writes, “We claim to have sophisticated, internationally appealing cities with deservedly high real-estate prices, yet we expect the young people will march into home ownership as they did a generation ago. The economics of housing make this expectation look ridiculous. ... Peak housing affordability has come and gone.”

Since property brings in such good financial returns, many owners aren’t occupying their units but rather holding them as investments. Sometimes, this even means leaving units empty while renters struggle to find vacancies.

The surge in Canadian real estate investors, particularly in B.C. and Ontario’s Golden Horseshoe, includes many foreign buyers. Foreign owners contributed to limiting the housing supply, and were profiting off of it, prompting the B.C. and Ontario governments to implement foreign buyers taxes in 2016 and 2017, respectively. The Globe found in May that Ontario pulled in $200-million in one year from this tax.

The current government’s approach and the Liberal vision

Let’s start with the latest news: In an attempt to appeal to young voters, Justin Trudeau announced Thursday that, if re-elected, a Liberal government would expand the first-time home-buyer program that was introduced in this year’s federal budget to boost affordability in major centres. He also unveiled a national 1-per-cent tax on non-Canadians who leave their homes in Canada empty while living abroad.

The Liberals launched a National Housing Strategy in late 2017, which is being led by the Canadian Mortgage and Housing Corporation (CMHC). The strategy was billed as a $40-billion commitment to reducing homelessness and improving the affordability and availability of housing for “Canadians in need.” (After the 2019 budget announcements, released just a few months before the coming election, the plan is now priced at $55-billion plus.)

Part of the strategy has included throwing federal money at local issues: In mid-August, Ottawa earmarked $184-million in loans and grants for Vancouver, meant to bolster the city’s affordable-housing projects. This is just one example − there have been at least 45 announcements about federal dollars to be contributed to housing developments since January.

But experts are questioning this approach, and say that it doesn’t come close to fulfilling promises.

If you’re a numbers nerd, you can track federal spending on housing affordability using the Office of the Parliamentary Budget Officer’s assessment. It found that the CMHC plans to spend an average of $2.8-billion a year over the national strategy’s 10-year term − which actually only amounts to a 15-per-cent increase in nominal spending. The Office also found a 14-per-cent reduction in funding “intended to help low-income households compared with the 10-year historical average.”

Additionally, the Office notes, the strategy does not “bind future parliaments to commit” spending on housing programs.

What do we know about where the other parties stand?

Matt Lundy wrote in his piece: “There’s no one issue to blame for the crisis. Instead, it springs from a combination of policy changes and tax reforms that have made rental construction less appealing, demographic shifts that mean demand is growing faster than supply, and a seemingly unstoppable housing market that has put home ownership out of reach for all but the wealthiest.”

“And there’s no quick fix.”

Solving Canada’s housing crisis comes at the nexus of complex policy issues that cross federal, provincial and municipal lines. It could include changes to mortgage regulations, tax adjustments, funds for new social-housing development and a plan that dovetails with environmental policies. It will also require a concerted level of provincial-federal co-operation.

So when the federal parties propose housing solutions, be critical and understand that there’s neither a single nor a simple solution.

Enter one of the minor kings of the Airbnb market: commercial operator Ke (David) Wang. By buying at least five houses and buildings in downtown Toronto to the tune of more than $8.5-million, Wang has created a “mini-empire of short-term rentals,” with his fiefdom consisting of dozens of listings. Another word for this is “ghost hotel” − a network of units not connected by one physical building. The Globe reported on May 2 that Wang reportedly made repeated use of an eviction loophole to remove tenants from long-term rental units in the city’s downtown core. He then used the space for his Airbnb pursuits.

If you’re a Globe subscriber, be sure to also sign up for our regular Politics Briefing newsletter, written every weekday by deputy politics editor Chris Hannay. He will be ramping up his election coverage of all the big headlines and campaign trail news to keep you informed. 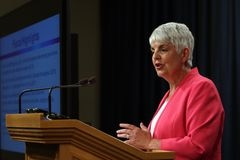 Follow Samantha McCabe and Jack Denton on Twitter @sam_mccabage @TrueDenton
Report an error Editorial code of conduct
Due to technical reasons, we have temporarily removed commenting from our articles. We hope to have this fixed soon. Thank you for your patience. If you are looking to give feedback on our new site, please send it along to feedback@globeandmail.com. If you want to write a letter to the editor, please forward to letters@globeandmail.com.
Comments