China may soon be the world’s largest economy. Canada is a trading nation that seeks foreign investment. For decades, now, Liberal governments have courted Chinese favour, have sought access to its market of more than a billion people, have welcomed its capital. Canada is typical of Western nations in looking upon China this way.

But attitudes are changing. For China is not simply an opportunity; it is also a challenge – it might even be a threat. Xi Jinping, president and now ruler for life, asserts that the Middle Kingdom’s state-managed capitalism and one-party rule is preferable to liberal democracy. This is the latest in a century of challenges to the West − German militarism, German fascism, Soviet communism. This challenge arrives as the West struggles with its own crisis of confidence, brought on by political polarization in Europe and North America, and personified by the rogue presidency of Donald Trump.

But with Wednesday’s cabinet decision to prohibit the sale of Canadian construction firm Aecon to a Chinese state-owned enterprise, Canada has said enough. Whatever the opportunities presented by China, the challenges of intellectual-property theft and compromised security are too great. If the Chinese want to rule the world, they must get there on their own, not by buying or stealing Western knowledge or innovation.

Opinion: It’s back to figuring out what Canada truly wants from China

This will anger a great many people in China, and some in Canada. But it is the right move.

Those who are made angry will say that Canada is demonstrating hostility to Asia’s most powerful state. But that state makes contentious claims over control of the South China Sea and then builds military bases on atolls to enforce its will. It, along with other challengers, launches cyberattacks against Western governments and Western businesses. It seeks co-operation with the international community while ignoring international laws and norms at its convenience.

This does not mean China, its government, its businesses or its people should be shunned by Westerners. But it should be watched carefully, which is why Ottawa launched a national security review of the proposed acquisition, and chose to block that acquisition once the review was complete.

There may be other, more permissible investments down the road. But not this investment. Not this time.

In investment, in trade, in protecting intellectual property, the Western standard is the global standard.

The Canadian government’s approach to China is largely bipartisan. When he was prime minister, Stephen Harper permitted the acquisition of the Alberta energy firm Nexen by a Chinese state-owned company. But he took forever to make that decision, personally announced that this was a special case, and warned the Chinese not to expect favourable treatment if a state-owned enterprise came knocking at the door again.

In the Harper years, the Liberals criticized the Conservatives for their cautious, even hostile approach to China. But as with so many other aspects of Canada’s foreign policy, once in power they followed the Conservative precedent.

This will, of course, not bode well for Canada-China free trade talks, which were to be under way by now, at least at the exploratory stage. But Wednesday’s decision may actually be helpful on that front as well.

In investment, in trade, in protecting intellectual property, the Western standard is the global standard. To fully integrate into, even one day lead, that global order, China must abide by its rules.

In any case, Chinese supremacy is anything but inevitable. The government’s disastrous one-child policy, even though it has been abandoned, has produced a demographic time bomb that simply can’t be defused. In a few years, India will surpass China in population. In a decade or so, the Chinese population will actually start to decline. China will lose hundreds of millions of people in this century because its fertility rate is so far below replacement rate.

An aging, declining population will challenge Chinese efforts to continue growing its economy. Restlessness and discontent will increase among the young who are burdened with caring for the old.

Some of us believe that the great challenge of this century will not be accommodating Chinese growth, but preventing a billion angry, distressed Chinese people chasing after too little wealth and burdened with so many elderly dependents from lashing out, putting the stability of the region and the world at risk.

It need not come to that. Canada, the West, the world can treat peacefully and happily with a China at peace with itself and everyone else.

But only if the rest of the world speaks to China from a position of firmness and strength. Allowing Beijing’s willing corporate helpers to acquire technology and knowledge in order to then become a competitor is not strength.

This is something that the Chinese nation may soon be hearing from others as well. 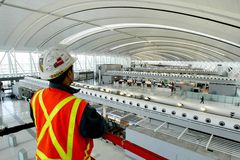