Imagine all-out, no-holds-barred warfare between a Conservative government in Ontario and a federal Liberal government over a tax that Ottawa has imposed on the province. Imagine the heat of the language, the impact on political brands, the damage to national unity. We could face that reality in a matter of months.

Justin Trudeau’s government has declared that it will impose a carbon tax on any province that doesn’t have one in place by next January. Doug Ford, the new leader of the Ontario Progressive Conservative Party, has vowed to scrap the Wynne government’s cap-and-trade carbon tax. Polls show that the PCs are favoured to win a majority government in the June 7 provincial election.

If a new Ontario Conservative government were to scrap cap-and-trade, then the Liberals would impose a carbon tax on Ontario. The federal budget released two weeks ago is emphatic on that point. “The government will … implement the federal system [the carbon tax] in whole or in part on January 1, 2019, in any province or territory that does not have a carbon-pollution pricing system that meets the minimum standard.”

This is not to discount the value of a carbon tax in fighting climate change. As part of the Paris accord, Canada pledged to do its part to limit global warming to 2 degrees in this century. A carbon tax is a necessary (though not sufficient) condition of meeting that pledge.

But while different polls show different levels of support for carbon pricing, Ontario and Canadian voters dislike carbon taxes. How do we know that? By the way people live their lives.

Last year, Ford moved more than 133,000 F-Series pickup trucks, the bestselling truck in Canada. Honda sold only 63,000 Civics, the country’s bestselling car. Fifty-four per cent of Ontario families live in single, detached dwellings, which are mostly heated by forced-air, natural-gas furnaces. More than 70 per cent of commuters in the Toronto area drive to work.

People choose to live carbon-intensive lives, however much environmentalists warn about melting icecaps.

How many pickup-truck owners, how many car commuters, how many people with natural-gas-powered homes do you think truly support the Wynne government’s carbon-tax regime? No wonder federal Conservative Leader Andrew Scheer is also opposed.

The Saskatchewan government already opposes the tax. Alberta will go to the polls between March 1 and May 31, 2019. United Conservative Party Leader Jason Kenney vows to scrap his province’s carbon tax if elected, and current polls suggest he will be. Are the Liberals in Ottawa determined to impose a carbon tax on all three provinces in an election year?

Political warfare is not inevitable. First off, Mr. Ford is a polarizing figure; he is hardly an inevitable premier.

Second, as my colleague Shawn McCarthy recently observed, cancelling the cap-and-trade contracts could cost the Ontario government billions in penalties, encouraging a new Tory government to find a way to wriggle out of its commitment, or at least fudge the timing of withdrawal.

Conversely, the Grits in Ottawa may seek to find some route to compromise with a Premier Ford, rather than having to fight him as well as Andrew Scheer in Ontario, in defence of an unpopular new tax.

But those who think Justin Trudeau would love to wage a federal election with Doug Ford as the effective opposition should think again.

No federal Liberal party would willingly fight a Conservative Ontario government as well as the federal Conservatives in an election campaign. Those who claim Ontario voters strategically choose to have opposing parties in Ottawa and at Queen’s Park have never produced evidence of such intent.

For the moment, all the Grits can do is hope and pray that the polls shift, and that Mr. Ford does not become premier of a majority Ontario government in June. Because if he does, things could get very messy.

Saskatchewan will have a carbon tax: McKenna
March 12, 2018 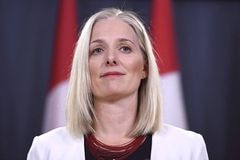 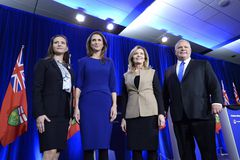 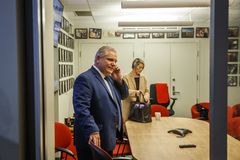