Campbell Clark
Published May 24, 2021 Updated May 24, 2021
For Subscribers
Comments
Text Size
Please log in to listen to this story. Also available in French and Mandarin. Log In Create Free Account

In August, at a time when vaccinations might make us feel like lockdowns are behind us, the federal government will launch a program that symbolizes one of the big looming failures of the recovery.

That’s when, according to last month’s budget, the Liberal government will start sending out a $500 payment to seniors 75 and older – a one-time bonus that isn’t justified by any economic rationale.

It is a transparent vote-buying initiative months before an expected fall election, but it symbolizes a broader problem that will intensify after the pandemic: the burden shovelled onto younger generations.

Finance Minister Chrystia Freeland’s recovery budget should have focused on spending that will make things better 10 or 20 years from now, but the Liberals couldn’t resist a lot of short-term consumption and free riding on the young people who will eventually pay the bill.

That $500 cheque to seniors comes on top of a 10-per-cent increase in Old Age Security payments to those 75 and over, which will start in 2022. That’s not a measure that targets the poorest seniors, mind you: The way to do that is to increase the Guaranteed Income Supplement. And seniors have lower poverty rates, and their average incomes haven’t been hit hard during the pandemic.

“Why are you giving money to the group with the lowest poverty rate in Canada?” Queen’s University economist Don Drummond said. “It’s pure politics.”

Will the federal budget be a watershed moment in Canadian fiscal history?

In fact, it’s shrewd politics. An economist might at least admire its efficiency at buying votes. It goes straight to a large group that tends to turn out and vote at elections – much more so than the 25-year-olds who will foot a lot of the cost. Not to mention the poor suckers who are too young to vote.

For a moment, you might think there should be a rule for 75-year-olds: You can either take the money, or vote, but not both – to eliminate the conflict of interest. But a lot of voters have always had an incentive to shovel costs to future taxpayers.

The thing is, younger generations are facing a daunting pile-up of burdens – and they’d better hope Canadians start to care about generational fairness.

This isn’t just a case of harping about debt, or annual deficits. It’s about what kind of costs, for what kinds of things, Canadians can fairly pass on to younger and future generations.

Younger Canadians already have to worry about inexorable trends such as the aging of the population, which means fewer workers will pay for more seniors benefits and the exploding costs of health care.

The pandemic increased the federal debt from 30 per cent of gross domestic product to 50 per cent, and small changes in projected growth or interest rates could see it grow quickly.

It’s not that that pandemic spending was foolish – you can argue, as Ottawa does, that the CERB kept the economy from going into a tailspin. But economists such as Scott Clark and Peter DeVries, two former senior officials in the Finance Department, have questioned whether it is ethical to just dump it on younger Canadians.

But there’s also a question about continuing spending, like the $101-billion, three-year recovery plan, financed with borrowing.

If it is spent on durable things that help the economy grow, or benefit future generations, it is fair, or fairer, to run a deficit to do it, Mr. Clark argued in an interview. Capital spending to improve the health care system might count, he said. But consumption, to buy goods or services or pay benefits for now – that we should pay for ourselves, with taxes, rather than pass it on to future taxpayers.

Of course, there will be debates over what is investing and what is consuming. A new child-care program might be a bit of both, depending on your point of view. But there were 700 pages of things people want now in that budget, too. David Dodge, the former governor of the Bank of Canada, told The Globe and Mail’s David Parkinson last week that he thought $25-billion of Ms. Freeland’s recovery spending went to growth, and $75-billion was for consumption.

That ratio is an indicator of a postpandemic failure, where the promise of building back the country has been used as an excuse to spread rewards. Politics provided an incentive for Ms. Freeland and Prime Minister Justin Trudeau to shovel the burden on future generations, and they just couldn’t resist.

Opinion
Federal budget 2021: This will be the backbone of the Liberal election platform
Subscriber content
April 19, 2021 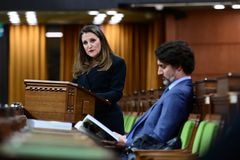 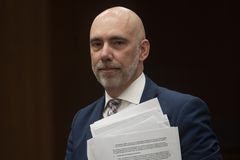 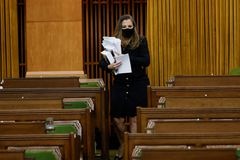