Morning people must love footbridges. At sunrise, anything is possible; the day is a potential-filled croissant chased with a steaming mug of mystery. So, too, do footbridges bring possibility: A new neighbourhood awaits discovery on the other side, or a personal revelation could happen at mid-cross.

Using footbridges can help keep us safe, too, since the automobile-pedestrian relationship has been rather strained these past few months.

Fortunately, Toronto is blessed with many pedestrian-only bridges due to its many ravine systems - University of Toronto architecture professor Larry Richards once described the city as "San Francisco turned upside down" - and architourists would do well to regard them as an alternative way to navigate neighbourhoods. Also, whether great or small, bridges are beautiful for their simplicity.

While I'm aware of the major players, I asked friends, family and some of the nice folks at urbantoronto.ca to help me locate a few lesser-known gems.

We'll start, however, with a footbridge almost everyone knows: It connects Riverdale Park East at Broadview Avenue and Gerrard Street to Cabbagetown's Riverdale Park West. Hundreds of whizzing cars pass underneath the Riverdale Footbridge every day. Built in 1957, it hovers over so many "uses" - the Bayview Extension, railway lines, a footpath, the Don River and the Don Valley Parkway - crossing it never gets boring.

I usually walk from west to east so I can admire the former Riverdale Hospital in all its macaroni-shaped, Modernist glory. When the 1963 building finally meets the wrecker's ball next year (or the year after), I'll likely switch my preferred direction. Regardless, it takes long enough to cross this one that contemplating the fate of Modernist architecture or the rejuvenation of the Don comes naturally.

Not far away, the Glen Road footbridge soars high over Rosedale Valley Road. A comment at urbantoronto.ca was that this bridge is a kind of "purgatory" between leafy Rosedale and the forest of St. James Town high-rises. Start at the Rosedale side and you'll learn, via a Heritage Toronto plaque, that it was a favourite dog-walking route for writer Morley Callaghan. Start at the other end and you'll no doubt ponder the fate of the boarded-up Victorian homes for so long, you'll forget to behold the breathtaking view of the road below as it snakes through trees, and the wonderfully warm "clunk-clunk" your footfalls make on the wooden planks. (For more information on Nos. 6 to 16 Glen Rd., go to www.heritagetoronto.org and type "South Glen Road" in the search box.)

Lesser-known footbridges are interesting because locals treat them as if they were private spaces; as such, these can help us pick up on a neighbourhood's vibe. The crossing over the Moore Park Ravine at Hudson Drive and Heath Street East is a welcoming and rather informal metal structure that looks similar to a railway bridge; here, strollers and joggers don't give strangers a second look.

A few kilometres away, however, at the Glen Cedar Bridge over the Cedarvale Ravine, twin lampposts on either side signal a more serious enclave. Here, too many pauses or fiddlings with one's camera raise suspicion. Perhaps that's because residents had to fight long and hard to have the 1912 bridge restored in 1989; perhaps it's because they're trying to find out who's responsible for the dozens and dozens of plastic water bottles littering the ravine below. From here, one can spy the now-vacant 1957 Imperial Oil building at 111 St. Clair Ave. West, home to a stunning lobby mural by painting superstar R. York Wilson.

Footbridges spanning railway tracks are especially important to the urban flâneur, since these are usually found in inner-city neighbourhoods. Pape Avenue, for instance, is sliced in two by tracks that run behind Gerrard Square, resulting in twin dead ends for drivers. Walkers, however, get to wind their way up the somewhat Brutalist structure and drink in a great view of the city skyline as they cross. Living cheek-to-jowl with auto repair shops and former warehouses, the bridge that connects Dundas Street West to Wallace Avenue in the west end is a wonderful metal composition with a wide, grand staircase.

Parks contain many footbridges, but most are too small to be included in this survey; the exception, of course, is the favourite of student photographers, the 1994 Humber Bay Arch Bridge designed by Montgomery and Sisam. Nearby, and built just a few years later, is the "leaning" bridge over Mimico Creek by starchitect Santiago Calatrava, who gave us the Allen Lambert Galleria at Brookfield Place on Bay Street. While tiny at only 44 metres, the bridge is worth a detour to see.

Another tiny footbridge that's worth a special trip is the 1950s-era covered structure built by the Canadian Institute for the Blind over Bayview Avenue just north of Eglinton Avenue East.

South of that is the ex-railway bridge of the Kay Gardner Beltline Park near Davisville Avenue and Yonge Street, but I consider the beltline to be more of a footpath. In the coming weeks (and with your help via e-mail), I'll write on neighbourhoods with strong pedestrian footpath systems, such as Don Mills.

When the mega-resorts brought mega auto-pedestrian problems to Las Vegas in the early 1990s, the solution was to get pedestrians up off the streets and onto "skywalks." While these wouldn't work on our high streets for obvious reasons, with a little creative planning, the way we arrive at Bloor, Dundas or Queen streets can include a footbridge, where the views and the possibilities are endless. 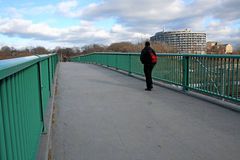