Retirees are flocking to recreational properties, opting for both cottage and condominium living

Canadians have always enjoyed getting off the grid and cottages hold a special place in our national identity. For many, a recreational property is the fulfillment of a dream. The waterfront beckons.

For baby boomers and retirees who are flush with cash after selling their homes in such hot markets as the Greater Toronto Area, this dream is coming true at an accelerating pace.

“Retirees are the key to this market in Ontario and for GTA residents in particular,” says Cam Forbes, general manager and broker of RE/MAX Realtron Realty Inc., which is based in the GTA. “There really aren’t very many millennials buying in the recreational market largely because most can’t afford to do so.”

The RE/MAX 2018 Recreational Property Report shows that, as Canada’s residential market has recovered, recreational property has experienced a surge.

The findings from this latest report show that one quarter of Canadians would consider buying a recreational property in the future. Those surveyed said the top reason is to have a place to go where they can relax and spend time with friends and family.

In 2017, slightly more than half of regions surveyed had retirees driving the market, the report says. In 2018, 91 per cent of popular Canadian recreational markets were being driven by retirees.

“Waterfront property is still the dream, but the reality of affordability comes to bear,” Forbes says. “So, people seeking recreational [properties] are now looking at properties that are a bit smaller, maybe a condo where you’d be near water but also have access to things such as golf and skiing, such as Collingwood.”

One of the waterfront developments that are selling briskly is Stone & South’s condominium project in Gananoque, Ont. Prices for the luxury dockside residences start at $500,000 and occupancy is scheduled for next spring. The town of Gananoque is 287 kilometres east of Toronto and located on the north shore of the St. Lawrence River.

“Everyone who comes here loves being on the water,” says Stone & South spokesperson Mariah Hamilton. “Gananoque is well-known as the Canadian gateway to the Thousand Islands. They can open their front door, then walk to a restaurant or theatre or even their boat slip.”

Buyers from larger urban centres are drawn by both the beauty of the region and a simpler lifestyle, she says. With access to the train, Highway 401 and airports, they can be in Toronto or Montreal within three hours.

Sixty per cent of the buyers are from the GTA. For those seeking the waterfront dream, just 28 suites remain within the project’s 70 condominiums.

“Many of our buyers are downsizing and this is replacing their cottage as their summer home,” Hamilton says.

“Some will live here during the summer and go away for the winter.” 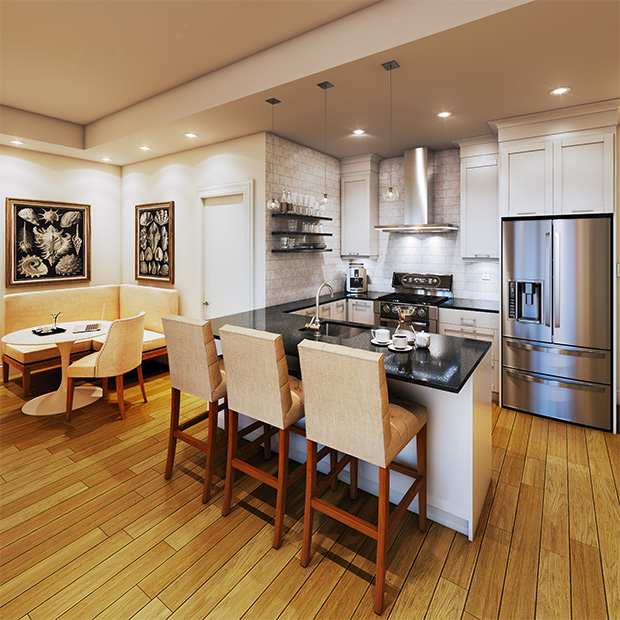 For buyers who are still working with the aim of returning to the GTA a few times a week, the trend of working from home is allowing them to live on the waterfront while enjoying the best of both worlds, Hamilton says.

While condo developments are selling strongly, Forbes says, many Canadians are still looking for a traditional cottage. For buyers looking for a site near clean lakes that has good value, Forbes suggests they look in the area of Parry Sound, Ont., located about 225 kilometres north of Toronto.

He says prospective buyers could find a reasonable cottage that has had some renovations at about the $400,000 price point, although shouldn’t expect it to be sitting right on the waterfront.

“Retirees are still looking for that detached cottage that is winterized and available throughout the year,” Forbes says. “They’re looking for something not too far off a main road for snowplowing.”

For those who want to dream big, how about purchasing your own island? And you may not have to be a retired NHL or movie star to do so.

In fact, 12 per cent of Canadians would consider owning an island property, according to the RE/MAX report.

“Island life here comes with significantly less sticker shock for those wishing to buy a piece of paradise,” Lunman says.

In recent years, the archipelago of 1,864 islands on the Saint Lawrence River between Kingston and Brockville, Ont., and northern New York’s Cape Vincent and Morristown, has become a popular retirement destination for boomers seeking affordable waterfront properties.

While some Canadian island properties with cottages in the Thousand Islands are listed as low as $350,000 to $400,000, more lavish mainland waterfront properties and islands are palatial, multi-million dollar estates. Eagle Point, an opulent mansion on the Saint Lawrence River east of Gananoque was listed in 2012 for a staggering $20-million and has since been resold.

One can always dream.

This content was produced by The Globe and Mail’s Globe Content Studio, in consultation with an advertiser. The Globe’s editorial department was not involved in its creation.