A raft of condo project cancellations over the past 18 months has left thousands of presale buyers in the Toronto area out in the cold. Now, a Globe and Mail analysis of dozens of projects where units have been on sale since 2016 has found that many are stalled and some in danger of collapse. 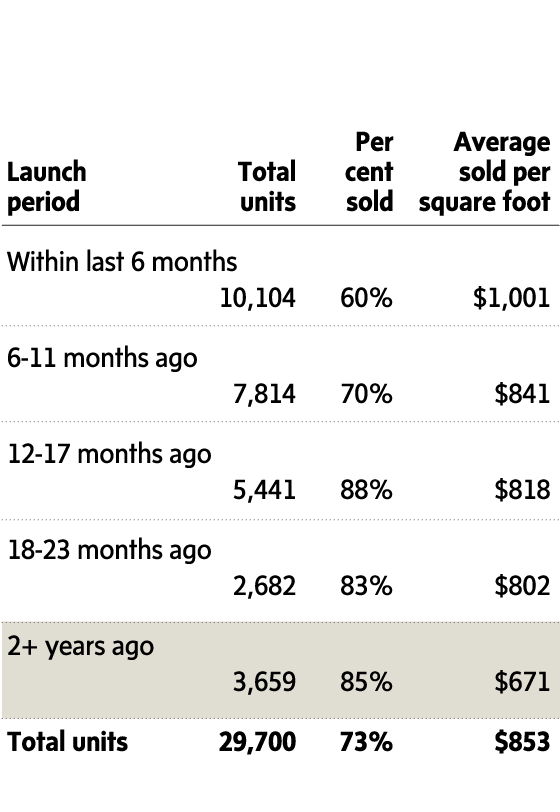 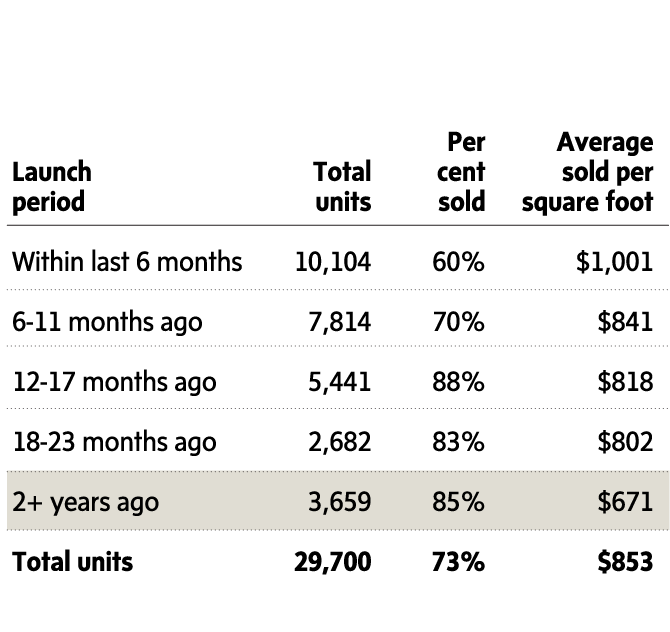 “Historically, projects were cancelled for a lack of sales. It was usually a few hundred units every year,” said Shaun Hildenbrand, chief executive of Urbanation. What’s different in recent years has been the cancellation of fully sold-out, large-scale projects. The builders have claimed a difficulty in getting construction financing amid rapidly rising construction and regulatory costs.

Tarion, Ontario’s new home regulator, recently confirmed that it is reviewing the cancellation of Central Park Ajax Developments, a proposed 410-unit project that some observers have long presumed dead owing to financing issues and conflicts with the local municipality as far back as January, 2018. In April, developer Terrenata Developments Inc. cancelled the sold-out The Step condo project and its 111 units. In March, Diam Developments Inc. cancelled a 119-unit project on Danforth Avenue.

These projects all shared similar traits: Units were presold on or before 2016 (before condo prices began to rapidly rise in the GTA) and often lacked full planning approval. As the per-square-foot cost of construction kept rising, start dates kept getting pushed back.

The Globe and Mail reviewed dozens of still-active projects that launched sales prior to 2016 and have yet to begin substantial construction. While many appear to be delayed but still on track, others bear a distressing similarity to projects recently cancelled.

The most endangered project is Danforth Square, a presold 279-unit condominium proposal in which the landowner, Forme Development Group Inc., is going through a Companies’ Creditors Arrangement Act sale process. On May 21, the court-appointed monitor KSV Advisory Inc. sought permission from the judge overseeing the bankruptcy to return deposits to prospective apartment owners, a move that would effectively cancel the development.

Other projects fall into a middle category, in which developers may be approaching presale contract holders and offering them incentives to walk away from the project as the builder pitches a renewed vision to planners or new audiences. These projects may not count as a full cancellation, because buyers may not be required to accept their deposits back. But the projects may never be delivered in the form they were sold.

The Bean, a mid-rise project proposed for 2433 Dufferin St., first applied for planning permissions in 2014, and has changed its scope from 50 units to more than 100 units in recent applications. Initial presale prices were about $450 a square foot, but according to Urbanation, projects preselling now in the GTA now average $766 a square foot.

“We have unfortunately had to refer this project to the OMB/LPAT, so we are in abeyance until after the hearing," said Doug Skeffington, director of development with Royal Park Homes, referring to the Ontario Municipal Board and Local Planning Appeal Tribunal. "We are hopeful that the project will move forward but are unable to give you any definitive date until after the decision is received. … Our hearing will occur in September.” While he wouldn’t confirm details of any presale contract negotiations, Mr. Skeffington did confirm that “we continue to keep our families informed as to the status of the project and are working with our families’ individual needs” and that some of the families “that are staying in” are from the company’s first launch in 2014.

5959 Yonge St. Condos is a 550-unit high-rise project that sold in 2014 but still has no planning permission to begin construction. According to sales representatives with developer Ghods Builders Inc. contacted by The Globe, buyers in the first of two towers have begun getting their deposits back. The planning for this project extends back to 2011, with many decisions and appeals between now and then. According to City of Toronto planning staff, the last unsuccessful mediation session with Ghods was in early 2018, and no further moves have been made on the site since.

Representatives for the 99-unit EV Royal project, at 1645 Dundas St. W. in Mississauga, say that despite having no planning permissions, and units that presold for about $670 a square foot, the project is in no danger of cancellation.

Salim Ansari, one of three principal investors in the project who has previously invested in custom home and townhouse building in the Calgary region, says the EV project is stalled while waiting for an appeal ruling from the LPAT. “We have the seed capital available, we need to go for construction financing," He said. "We have been in contact with some of the financing groups. The process is quite frustrating; it takes years and years.”

For some developers, even though the financial picture is not pleasant, there’s simply no option of cancelling.

“We have a reputation to protect as well. We don’t want to get a bad name,” said Mark Reeve, a founding partner of Urban Capital Property Group, a major condo developer that has been stuck for years waiting to resolve water issues on its Ravine site at 1215 York Mills Rd. The first phase began selling in 2015, with 336 residential suites that were priced in the low $500-a-square-foot range. These days, some Toronto sites can fetch between $800 to $1,000 a square foot, and Mr. Reeve acknowledges that because costs have gone up, his company will likely lose money on some of the 1,700 units the company has planned for the 13-acre site.

“I wish I had kept everything and not sold anything,” Mr. Reeve said. “Our industry has experienced a huge amount of cost inflation; development charges went up 40 per cent last year. I don’t think anybody cancels because they want to – some guys just had trouble. When we sign an agreement, we stick to it, absent not getting an approval from the city.”

For now, Pauline Lierman, Urbanation’s director of market research, is keeping an eye on these delayed projects, and suggests one more warning sign for worried buyers: “They just don’t call you back,” when things are going wrong, she said. That said, she says she doesn’t believe 2019 will have nearly as many cancellations as 2018. “Some of [those cancelled] sites are very unique, it’s not that they did something wrong. In 2019, the volume is going to be far lower.”