Silo No. 5 in the Old Port has stood empty for a quarter-century, a hulking monument to the glory days of Montreal as the dominant grain shipper to the world.

The rusting, abandoned grain elevator complex, once a bustling storage and transfer facility, has come to be known in some circles as a monument to something else: bureaucratic indecision and urban-planning ineptitude after numerous failed attempts to come up with a viable redevelopment plan.

But federal, provincial and city officials say a recent proposal to transform the facility into a vital urban space that is well integrated into its surroundings is the real deal this time around.

A call has been put out for proposals from developers for a massive makeover of the seven-hectare site, known as Pointe-du-Moulin. An advisory committee of experts that includes heritage and urban-planning specialists is to study the proposals, with a decision on who gets to acquire and redevelop the land expected in September.

The site, now owned by Crown corporation Canada Lands Company, has been the subject of numerous revitalization proposals in the past. Among the projects presented by developers or ideas kicked around by various officials and planners: an enclosed glass viewing deck at the top of the 12-storey structure that would provide stunning views of the city skyline, St. Lawrence River and surrounding region; a museum; a centre for network servers or data storage; a hotel; and a condominium complex.

The task of repurposing Silo No. 5 is not an easy one. Built in stages over several decades beginning in 1903, it is a sprawling, 400-metre-long industrial complex of interconnected silos, docks, spillways, marine towers, conveyors and railway tracks. It is about as far as you can get from the typical buildings displaying the kinds of aesthetic values making them shoe-ins for heritage protection. Indeed, some critics over the years have slammed the silo as an ugly blotch on the city’s urban landscape that should be torn down. But it has prevailed as a symbol of Montreal’s industrial past and enjoys “recognized” building status from the federal Heritage Building Review Office. It is also listed in provincial and municipal heritage repertoires.

“There have been a lot of discussions about what to do with the silo over the past 20 years,” said Dinu Bumbaru, policy director at Heritage Montreal and a member of the committee that will decide on the winning proposal. “It’s a complicated project requiring a very sensitive approach. It’s more like a machine than a building.”

The drawn-out process aimed at breathing new life into the Montreal silo echoes a similar situation in Toronto, where there has been dithering for years over the fate of two grain elevators at the eastern and western edges of the central waterfront.

“The challenge is to find a way to respect the integrity of the site and the landscape it occupies,” said Joanne Burgess, a history professor at the University of Quebec in Montreal and director of the History and Heritage Lab. “It’s an important landmark.”

The disappearance of neighbouring silos over the years and the Old Port’s transformation into a tourist and recreational destination have left Silo No. 5 as something of a stranded behemoth, Ms. Burgess said. It’s important that any redevelopment of the site doesn’t obliterate what it represents as a touchstone of a significant era in Montreal’s history as an economic, industrial and shipping power, she said.

Ideally, an effort should be made to preserve some elements of the machinery inside the silo, allowing visitors to at least get some idea of what storage and transshipment entailed, Ms. Burgess added.

There is a growing receptivity on the part of the general public to industrial heritage preservation and recognition that it’s not a bad idea to keep around a few impressive vestiges from the past, she said.

Construction on the first section of Montreal’s iconic silo, by the Grand Trunk Railway, began in 1903. There followed three other stages of building and expansion, in 1913, 1924 and 1958, according to Heritage Montreal’s thumbnail history on its website.

By 1928, the grain elevator had become the world’s leading grain port. “With its floating elevators which allowed the offloading of grain from the holds of lakers and the simultaneous loading of transatlantic vessels without ever coming into contact with the quays, the silo demonstrates the technological prowess of a bygone era,” the website says.

The site, and what to do with it, represent a “case that raises issues of relation between the urban setting, its identity, its scale and its heritage qualities,” Heritage Montreal says.

Montreal’s waterfront grain transshipment facilities and similar installations throughout North America basked for a while in the glow of admiring attention from influential European modernist architects, including Walter Gropius – founder of the Bauhaus School – and Le Corbusier. In his 1923 work Vers une architecture, Le Corbusier lauded Montreal’s Silo No. 2 – demolished in the late seventies – for striking a fine balance between form and function.

Previous proposals from years past have mentioned the site’s potential for transformation into a popular tourist destination. Some proponents pointed out that inspiration might be drawn from New York City’s famous High Line, a green space and promenade built along an abandoned elevated rail line on the city’s West Side that has been a massive hit with visitors since its opening 10 years ago. But a single-function design for the silo edifice probably won’t fly.

Over the course of its quarter-century dereliction, the steel-and-reinforced-concrete structure has on a few occasions served as the location for innovative art projects. For example, in 2017 noted American conceptual artist Jenny Holzer used part of the silo’s massive walls to project a selection of phrases from Leonard Cohen poems, songs and other writings as part of an exhibition in honour of Mr. Cohen put on by the Montreal Museum of Contemporary Art. 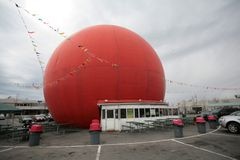 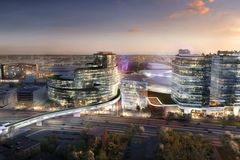 Montreal developer pulls condo marketing campaign after Indigenous community protests
January 25, 2019
Follow us on Twitter @globeandmail Opens in a new window
Report an error Editorial code of conduct
Due to technical reasons, we have temporarily removed commenting from our articles. We hope to have this fixed soon. Thank you for your patience. If you are looking to give feedback on our new site, please send it along to feedback@globeandmail.com. If you want to write a letter to the editor, please forward to letters@globeandmail.com.
Comments