Globe Real Estate followed the construction of a new 2,700 square-foot home in an Etobicoke neighbourhood that’s become, like many Toronto residential enclaves, a hotbed of demolition and rebuilding activity.

On a recent Sunday morning, Tory Crowder and Shawn Thomas’s home in Toronto’s Etobicoke area looked and sounded a great deal like, well, a home.

Two of their three kids had just come back from overnight camp, which meant the second floor had turned into a riot of half-finished laundry while the walls downstairs echoed with excited kid talk. There was evidence of some poolside activity from the night before. And a few breakfast dishes sat on a kitchen counter.

Conspicuous by its absence was the overhang of relentless decision-making that dominated the couple’s days and nights since they began building a modernist dream home on a pleasant lot next to the Park Lawn Cemetery, near the Kingsway.

All in, the project took almost five years, from their very first inquiry to architect Graham Smith, of Altius, with construction and landscaping ongoing since the spring of 2017. The 2,700-square-foot project, a teardown, took longer and cost more than they’d expected. In fact, a mid-rise condo on a stretch of Bloor Street not far away went up faster.

“I’m not sure what we learned,” said Mr. Thomas, a wealth advisor, as he sat on the couch in the living room. “The process was a lot more intensive than I expected it to be, but we’ve come out the other end really happy with the result.”

Over the past two and a quarter years, I’ve watched their house evolve from a muddy gash in the half-frozen ground to a done deal. This dwelling contains not only their stuff and their kids, but also the seemingly endless choices, course corrections and anxious moments that were as integral to the project as the open-concept kitchen and the windows with the expansive backyard views. Their fingerprints are on this place in a way that no subsequent owner’s ever will be.

As with many Toronto new-builds these days, the four-bedroom house has a decidedly modernist aesthetic, reflecting their tastes. Mr. Smith’s cool, modular design ties together the interiors and the exterior, done in a multi-tone grey stucco, with the rear landscaping picking up those themes and carrying them all the way to the cabana/fully-equipped home office situated at the back of the backyard.

The house is fitted out with plenty of smaller domestic luxuries: two of three kids’ bedrooms have their own sinks, for example, and the numerous hardwood pocket doors, supplied by a family company founded by Ms. Crowder’s father, not only maximize space, but use high-tech roller mechanisms to prevent banging.

Because they went in with a somewhat constrained $1-million budget, Ms. Crowder and Mr. Thomas opted for a slightly smaller floor plate than would be typical for a suburban tear-down. The final cost came in at about 20 per cent higher than their original estimate, Mr. Thomas says.

Going in, Mr. Graham advised them to stick to the plan he’d devised. But practically speaking, that plan contained a great many forks in the road, mostly choices between various types of materials with a range of price points, but also a couple of layout and structural questions – e.g., the raison d’etre of a first-floor dividing wall and the location of the dining room – that had to be resolved.

“Some of them we did say ‘yes’ to,”Mr. Thomas adds. “But you have to be careful what you say yes to. You have to make sure you’re going to value it.”

The kitchen, for example, went quite a bit over-budget, as kitchens do. But it’s the social hub of their home, so they’ve got no regrets. However, by trying to value engineer some of the costs out of the basement – a cavernous play space – they ended up with a heating system down there that doesn’t quite work when the temperature drops.

Reflecting on that serpentine process, Ms. Crowder says her regret is not hiring a designer to steer the project through all that decision-making. Their general contractor David Le Provost, she adds, often played that role informally. “He really put things into perspective for us without trying to push us.” Mr. Thomas, however, points out that finding a general contractor with design chops isn’t something they should have counted on going in. “We were lucky,” Ms. Crowder adds.

What did help a great deal, they both say, were digital 3-D renderings, especially those created by their kitchen contractor, Paragon Kitchens, in Guelph, Ont. By contrast to architectural renderings and floor plans, such images better conveyed the end goal. As it turned out, Paragon’s images were almost eerily accurate: put away all the counter detritus and it is difficult to distinguish the rendering from a photo of the actual kitchen, which, Ms. Crowder adds, functions exactly as intended.

In some cases, however, all those carefully laid plans couldn’t quite anticipate the way the space is actually being used. The cabana-home-office, as it transpired, has turned rather quickly into a hang-out space for the kids, who like to retreat there and watch movies. “I haven’t done that much in here because this is one of those spaces that gets used for everything,” Ms. Crowder says.

The learning, ultimately, may be that all the sometimes contradictory design advice can only go so far. Mr. Thomas and Ms. Crowder, who, after all, are the experts in the way they live, both came to realize that there was no ready way to outsource all those decisions that cropped up at regular intervals during the protracted construction process. In many cases, they just had to gut it out.

“My view is that where it’s a big thing, you need to rethink and understand the consequences of the different options,” Mr. Thomas reflects. After all, he adds, “It’s your home. You’re going to have to live in it forever.”

This is the tenth and final installment of The Globe and Mail’s series on the construction of this house. Previous stories can be found below: 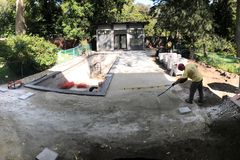 Owners of rebuilt Etobicoke home try to decide what to do with old furniture
September 25, 2019 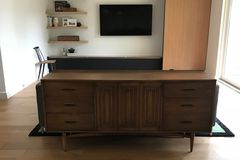 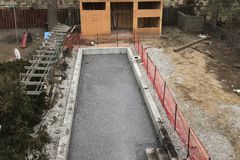 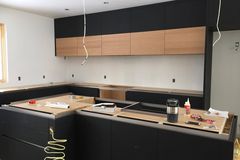