After a two-year negotiation over the zoning for a seven-acre development at Bloor and Dufferin in Toronto, the city, the local community and the developer announced an agreement last week on an “innovative” deal to create a $17-million fund to build affordable housing.

But Josh Bénard, Habitat for Humanity’s vice-president for real estate development, who brokered the deal, cautioned that it does not amount to a "get out of jail free card” for developers seeking a way out of the thorny problem of negotiating an appropriate level of affordable units in their projects.

The distance between those proposals set the stage for a deadlock – the kind that often ends up in the Local Planning Appeal Tribunal.

The fund may have been a card developers played to get a community on board with its plans, but Mr. Bénard stresses that if Capital Developments wasn’t already building 56 affordable units on the site, Habitat wouldn’t have agreed to put its name to the deal.

“You can’t just write a cheque and absolve yourself from building inclusive communities,” Mr. Bénard said. “Our brand has a lot of value and we do not hitch our brand or organization to just any business.”

“Unfortunately, at the end of the day, we realized there was a big gap in terms of what was feasible,” said Jordan Dermer, the other co-founder and managing partner with Capital Developments.

For Emily Paradis, co-chair of BBBD and an instructor at the University of Toronto’s urban-studies program, the issue of providing more affordable housing is not a parochial neighbourhood concern – it’s a systemic regional failure.

“Of the hundreds of thousands of new units developed in the past five years, only a tiny fraction … have been affordable to households of low and moderate incomes,” she said. The community group had other concerns, about parkland and community space, but the housing request was rooted in the city’s own estimates. “It didn’t come out of nowhere. The city itself recommended 20 per cent as an appropriate allocation for inclusionary zoning: It’s across from a subway station and part of a major transit area,” she said.

As it happens, the local councillor for Ward 9 is Ana Bailao, a deputy mayor and the city’s affordable-housing czar, who convened a number of meetings over the two years, even urging the parties into mediation to no avail. Then, she invited Habitat for Humanity to join the talks and see if a solution could be found.

After discussing a number of options with Capital Development and BBBD, Mr. Bénard called Mr. Cowan on a Saturday about a month ago and pitched him a new idea: Instead of putting more affordable units on the site, what if the developer gave some money to establish a non-profit land trust that could go and spend that money more efficiently on affordable housing?

“They had put a number on the table that was less than this [the $9-million in cash, an $8-million loan and $2-million for community space], to buy more units on the site,” said Mr. Bénard, but the numbers wouldn’t have been significant.

(The parties call the fund a “land trust”, even though there is no land being transacted – it is an agreement that the money must be spent inside Toronto and Ward 9 on building affordable housing.)

The kind of housing units Habitat likes to build are between 800 and 1,000 square feet. Currently, market prices for units such as a transit-located condominium in Toronto top $1,000 a square foot, which on the Dufferin site would mean about 20 Habitat units.

But, given the same amount of cash, Mr. Bénard says Habitat can stretch those dollars farther than a private developer can. “Habitat has a philosophy that we’re not building multimillion dollar condos that have granite countertops. When I build a building, I get massive discounts that are then passed onto the families [who buy the below-market units].”

Mr. Bénard thinks Habitat can stretch that land-trust cash to build between 100 and 180 affordable units, and he has hopes of expanding the trust with new donations and commitments from other levels of government to build even more. “Our rule is, for every dollar we get we can multiply that by four … in three to five years, we could see some significant growth in this money,” he said.

Mr. Bénard says his phone has been ringing off the hook with developers, philanthropists and other affordable-housing advocates and providers asking how they can replicate his deal-making. 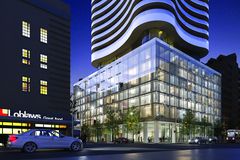