In 1931, the eye-popping Uptown Theatre opened on a commercial street in River Heights, a leafy residential neighbourhood of Winnipeg. And after years of striking a pose as a bowling alley, today it is revamped as a mixed-use apartment building.

Designed by Winnipeg architect Max Blankstein, a Jewish immigrant and the patriarch of a family of noted modernist architects, the building’s aesthetic was anything but streamlined. There was an eclectic mix of Spanish, Moorish and art deco influences, while the gold-and-cream painted Portland stucco façade featured ornamental balconies, niches and arched windows. There were also gilded domes on the roof.

The interiors took the theme further: the ceiling was painted a rich cobalt blue and festooned with stars “to match the sky.” Underneath was a melange of high relief plaster, arcading, columns and urns.

Undoubtedly, the building stood out among its neighbours of small shops, grocers and bank branches.

But the Uptown was typical of the purposely elaborate theatre design of its day: it was meant to transport theatre- and movie-goers to another world from the minute they set eyes on it. In short, the more exotic the better. Like the Uptown, these theatres typically ran a gamut of styles, sometimes all at once, that often put owners, architects and architecture critics at odds. But they were immensely popular.

By the mid-20th century, however, TV sets in living rooms killed these old theatres. As a result, the Uptown Theatre was transformed into the Uptown Bowling Alley that hosted a birthday party for practically every mid- to late-20th-century kid in Winnipeg.

In 1989, Winnipeg developers Globe Capital Management bought the property, but the bowling alley remained its tenant until 2018. When they left, nostalgic Winnipeggers became preoccupied with the fate of the building, especially as the developers announced plans for an upscale apartment building in an area with few multi-family buildings.

But the project, The Uptown Lofts, turned out to be an example of adaptive reuse: taking a cherished old building, repurposing and modernizing it in-line with today’s social and tech needs.

“We knew how important this building is to the community,” said Richard Morantz, GCM’s president. Mr. Morantz grew up in the neighbourhood and says he shares in the nostalgia for the Uptown.

The company hired Landmark Planning, a planning and development consultancy, to undertake public engagement. In addition to the fate of the building, there were also concerns about traffic congestion and parking. The apartment plan included 25 parking stalls in the lot of a neighbouring property GCM also owned, and the developers argued that traffic would be less of an issue with a residential building than when it was a bowling alley.

In the end, “we had really good buy-in from the neighbourhood,” Mr. Morantz says.

Worries about the building itself were also quickly put to rest.

The building’s façade had a city heritage designation, so it was protected from any feared wrecking ball. Any alterations suggested by the developers and the project’s architects, Winnipeg-based Nejmark Architects, had to first be accepted by Winnipeg’s Heritage Building Department.

The exterior’s restoration included replacing deteriorated clay tiles on the roof and upper portion of the façade, the Portland cement plaster exterior and the muntin window frames. Work also went into repairing the balconies which are a defining ornamental feature. And the city was particularly protective of the original Portland stucco – a beautiful multi-coloured hue that the design team worked hard to replicate when restoring the façade.

The interior was another story. The early elaborate architectural features were already long gone: It was transformed into a bowling alley in the late 1950s when modernism was all that mattered.

“It was all ‘throw away and build new,’” said project architect Tat-Liang Fabio Cheam. So instead, the architects focused on preserving the exterior as a historic and beautiful container for the modern interior design. “We built a building within a building.”

A few surprises revealed themselves, however.

Under some ceiling tiles, they discovered some of the vestibule’s original plasterwork and an interior balcony. “Today, you [can] look up and it’s really quite dramatic,” Mr. Morantz said.

To revamp the structure into an apartment dwelling, the developers knocked out both floors of what was the two-level bowling alley and built two new floors within the original frame. Now, the renovated structure encompasses three-storeys. Within are 23 apartment units that range from about 580 square feet to just less than 1,200 square feet, and monthly rent prices range from $1,340 to $2,750.

Main-floor apartments have ceilings of higher than 10 feet; second floor units have 8 1/2-foot ceilings, and third floor units’ ceilings can go up to more than 19 feet. On the third floor, light streams through the arcaded windows that look down onto a sea of rooftops of neighbouring residential houses.

When they began the demolition, the builders also uncovered the beams of the original vaulted ceiling. The architects worked around those trusses to make dramatic ceilings, now mixed with minimalist track light fixtures.

These suites are also equipped with hardwood floors, as well as subway tiles in bathrooms and on kitchen backsplashes. Other features include walk-in closets and ensuite laundry.

There are 12 suites on the top floor, seven on the second floor and four on the main floor. Having a majority of apartments on the top floor is an attractive feature, but there was also an unexpected reason for this.

They needed windows for apartment units, but there were none on the sides of what was originally a theatre. Since the city allowed the architects to add in new openings, the west-facing side added windows in all three floors and balconies on the second and third floors.

But on the east side, that wasn’t possible. In the 1980′s, prior to the building receiving the heritage designation, a two-storey glass coated infill was added to the east side, connecting it to a neighbouring building. As a result, windows could only be added on the top floor and the east-facing lower space couldn’t be made into residential suites.

Beyond the apartment units, the renovation also added new commercial spaces. For instance, the north part of the main floor has designated space for two retail and professional spaces with street entrances.

And during the pandemic, the global trend to lease office space to tenants in rental and condo buildings grew. While building owners all over North America were scrambling to offer them, the Uptown had an easy answer.

“There were no windows [on the east-facing side] so we decided to turn it into office space,” Mr. Morantz said. They converted it into 2,800 square feet of configurable office space.

Mr. Morantz is also betting that the trend is here to stay because of its convenience. At the same time, he believes it will foster a community spirit with tenants mingling in shared common spaces. And their neighbours will be the similar kind of small businesses as when the building first came up in the 1930s: grocers, florists and, in a nod to today, a cannabis-related therapy shop.

Winnipeg condo on a very challenging site an exercise in designing wonderful on a dime
Subscriber content
April 16, 2021 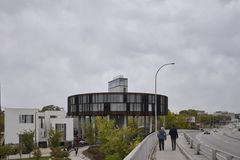