Real estate watchers tend to use dramatic language when describing markets with higher prices and harder affordability across Canada: insanity, grim, madness, war, crash, bubble, boom, crisis. There’s almost an assumption that something must be wrong with the market when working people find it hard to buy in.

But a report from the chief economist for the Chartered Professional Accountants of Canada (CPA Canada), Francis Fong, has a suggestion for a different description of what’s happening: “justified.”

“We should consider the possibility that, given Canada’s relatively healthy financial system, the current level of home prices is justified and that significant downward pressure is unlikely to occur,” writes Mr. Fong, who then acknowledges that the idea that high prices might be “the new normal” strikes fear in the hearts of non-owners everywhere. “This is perhaps the most terrifying threat of all: not an imminent economic crisis, but the possibility that homes may never be affordable for those who are already priced out.”

Not that there are no headwinds: The Teranet-National Bank House Price Index found October home prices slipped 0.4 per cent from September. Year over year, however, eight of the 11 biggest metro markets saw price growth, led by Victoria, Montreal and Ottawa, while only Calgary, Edmonton and Quebec City saw annualized declines.

In September, RBC Economic Research declared Canadian affordability was at its lowest point in 30 years, reporting its housing-affordability measure hit 53.9 per cent, from 43.2 per cent three years ago. In the Greater Toronto Area, the measure hit 75.9 per cent, “meaning a typical home buyer would need to spend an astounding three-quarters of their income to cover ownership costs,” the report stated.

Mr. Fong said Canadians who believe there is unjustified price inflation in real estate markets often point to the price bubbles seen in the United States in the early 2000s, driven in significant measure by a mortgage market that was pouring subprime debt into local markets and the global financial system (which resulted in the crisis of 2007-08).

“If you only look at headline statistics – house prices and debt – Canada looks like its heading for trouble,” he said. “The story about how a housing boom turns into a housing bubble is more well understood. We know what that narrative looks like. Do we share those kind of vulnerabilities? The answer to that is no … credit quality has gotten better over time, and not worse.”

He cites data from Canada Mortgage and Housing Corp. that show “the share of borrowers with high credit scores has grown from an average of 65 per cent between 2002 and 2008, to 88 per cent as of the 3rd quarter of 2017. [The number of] borrowers with lower credit quality has fallen dramatically, particularly those with the lowest credit scores, whose share has fallen from 4 per cent in 2002 to nearly zero as of last year.” Private credit-reporting firm Equifax has also said the share of buyers with good or excellent credit grew from 81.5 per cent to 84 per cent between 2013 and 2017. “This suggests that home price gains are being driven by those who can actually afford such prices,” Mr. Fong writes in his study, entitled The Real Story Behind Housing and Household Debt in Canada: Is There Really a Risk?

“There are other countries with higher debt-to-income ratios than Canada does that have sustained them,” Mr. Fong said. Indeed, the Organization for Economic Co-operation and Development puts Canada eighth in debt-to-disposable income ranks, behind Denmark, the Netherlands, Norway, Switzerland, Australia, Ireland and Sweden. Not surprisingly, Canada has joined many of those countries high on the International Monetary Fund rankings of home prices growing faster than incomes: since 2010, Canada’s ratio of home price to income became the fourth-highest behind New Zealand, Austria and Luxembourg, with Sweden, Australia, and Switzerland next in line.

Mr. Fong notes that home prices have so far avoided crashing out, even with sharp economic shocks such as that seen in Alberta. The combination of a one-percentage-point increase in interest rates over the past year, a tougher borrowing regime under the stress test and a doubling of unemployment may have “flatlined” home-price growth in Calgary, but it didn’t knock it down significantly.

“Home prices in places such as Calgary, Edmonton, Saskatoon, and Regina have seen only modest downward pressure and are still double what they were a decade ago,” said Mr. Fong, who notes that rapid price growth was not limited to the GTA and Vancouver in recent years: “Ottawa’s home prices doubled over the same time frame as in Vancouver. Prices in Victoria have risen by more than 40 per cent just in the past two years.”

Some observers think prices are deflating, but slow enough to avoid an outright crash.

“Prices are definitely coming lower, but I don’t see anyone that’s panicking to sell. It’s a very contained downturn,” said Steve Saretsky, a Vancouver-based realtor who has been vocal about his belief that the long 20-year housing boom has come to end, and that Canadians will someday have to deleverage from their high levels of household debt. “To me, it looks like the air is being slowly let out. [In Vancouver, prices of] luxury homes have dropped 20, 25 per cent and nobody has blinked … even affordable, entry-level homes are down 15 per cent.”

By some measures, prices in these markets would have to fall dramatically, 30 per cent, 40 per cent or even 50 per cent, for example, to be “affordable,” according to RBC’s ratio.

“One thing I’ve observed is there’s a certain group of Canadians living in our big cities – who tend to be younger, who are renters, gainfully employed – who, in a way, are maybe hoping for a crash, because that could potentially bring prices back down to a level that make sense and are affordable,” Mr. Saretsky said, even though the financial consequences would be felt broadly. “Canadians tend to think of ourselves as being this bastion of equality, and I think what’s happening is that maybe on our way to becoming world-class in our cities, we are losing that identity of equality. And that, I think is a tough pill for us to swallow.” 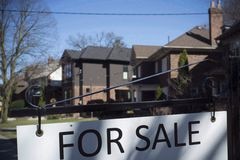