Of the suites listed around Westhills Towne Centre in midsummer, agent Bryon Howard determined only half of them had actually sold and the ones that did took 47 days on average. So he priced this one-bedroom-plus-den penthouse under $400,000. While it only had four visitors, one quickly committed in July.

“In that building, there’s normally a few units available, but it was our lucky time in that there were none available. And it’s one of the better units in the building,” Mr. Howard said.

“Knowing that the market is quite flat in Calgary, we didn’t price it high, though there was room for negotiation.”

Within a 21-year-old building designed for residents over 55 years of age, this 1,178-square-foot suite has traits of a low-rise home, such as an open living and dining area with vaulted ceilings and a fireplace, as well as a west-facing balcony.

There is a separate kitchen, two bathrooms and a laundry room. Two-car parking is also included.

Monthly fees of $509 pay for heating and water, in addition to maintenance of common areas, such as the pool, woodworking shop, car-wash bays and five guest suites.

“It’s a little bigger than most in the complex,” Mr. Howard said. “[Plus] it’s on the top floor with vaulted ceilings and faces a nice direction.” 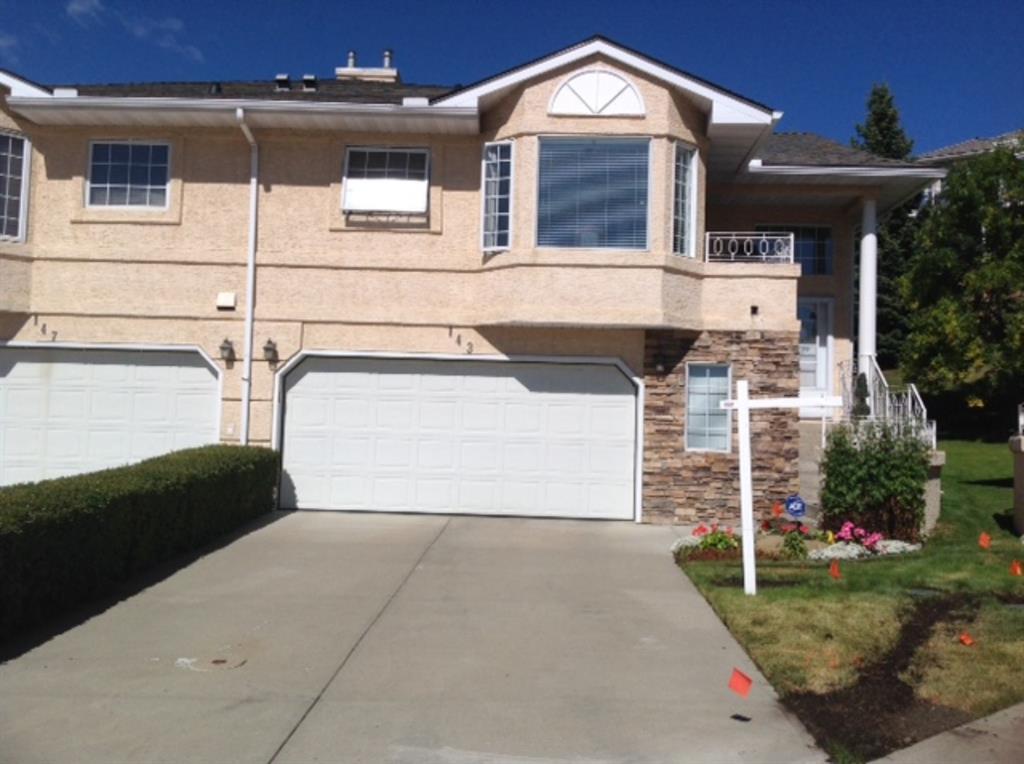 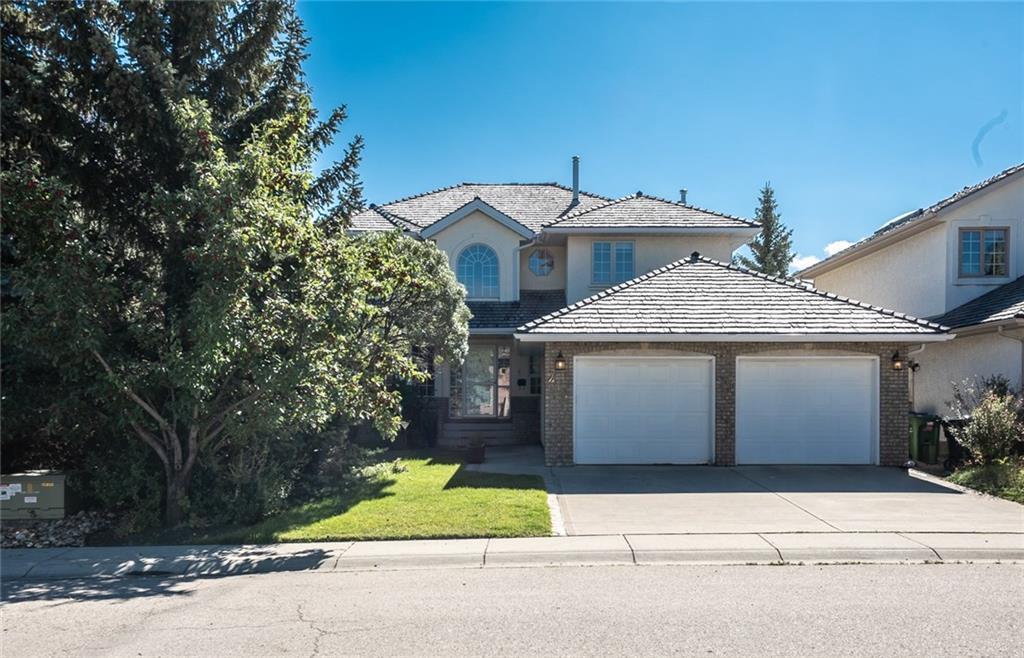 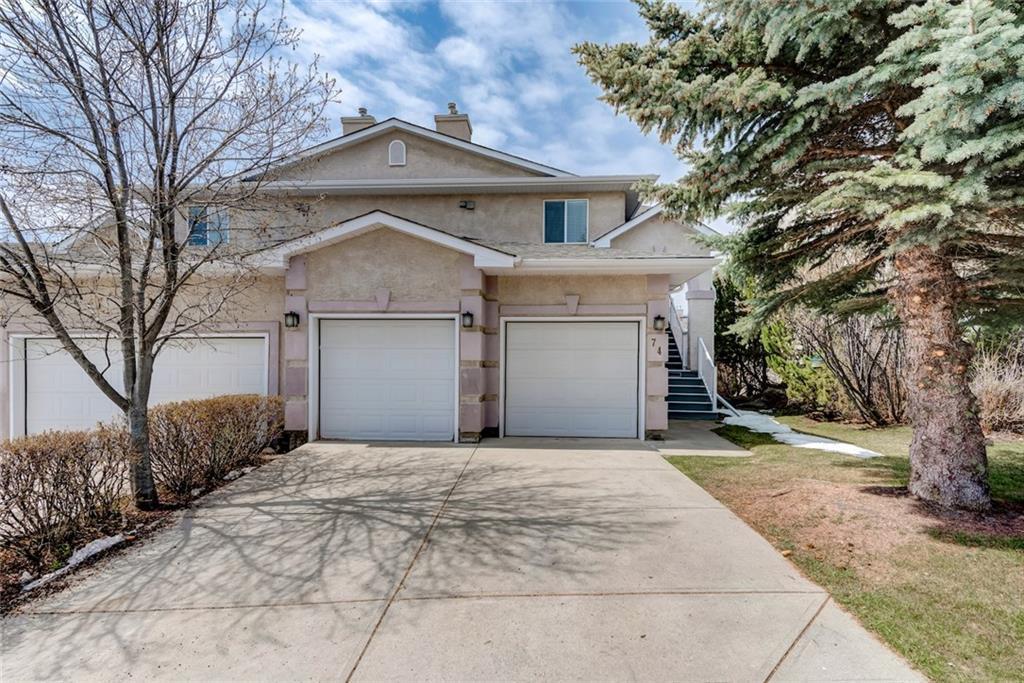 315000.00
74 SIERRA MORENA Green SW, Calgary, Alberta
CIR REALTY
Bedrooms
2
Bathrooms
2
Building Type
Condo/Strata
Property Type
Single Family
Amazing opportunity to own this massive TOP FLOOR bungalow unit on a very quiet street in Signal Hill. With a 20.2x23.4 ft DOUBLE ATTACHED garage, you will love the fact that you can easily fit two vehicles & have plenty of room for storage. The unit itself boasts over 1330 square feet & coupled with the vaulted ceilings, there is a ton of light that shines into this open concept space. This very PET-FRIENDLY complex typically will allow dogs with Board approval. The bright white kitchen is clean & offers a ton of counter space with modern appliances & a casual breakfast nook. The living/dining space is very open with a corner GAS FIREPLACE which adds a lot of warmth. Off the living room, youll love the spacious balcony which offers stunning VIEWS to the WEST. The Master Bedroom will fit your full-sized furniture, while the walk-in shower in your UPDATED en-suite is ideal to get into & out of. The second bedroom is functionally located at the other end of the condo, allowing for some privacy. A 4 piece bathroom & a laundry room complete this space. Recent updates include a new hot water tank. Very healthy Reserve Fund for this small 12 UNIT complex. (id:31729)
Listing ID A1063774
Salesperson Natalie Berthiaume
Brokerage CIR REALTY
View on realtor.ca
Open this photo in gallery: 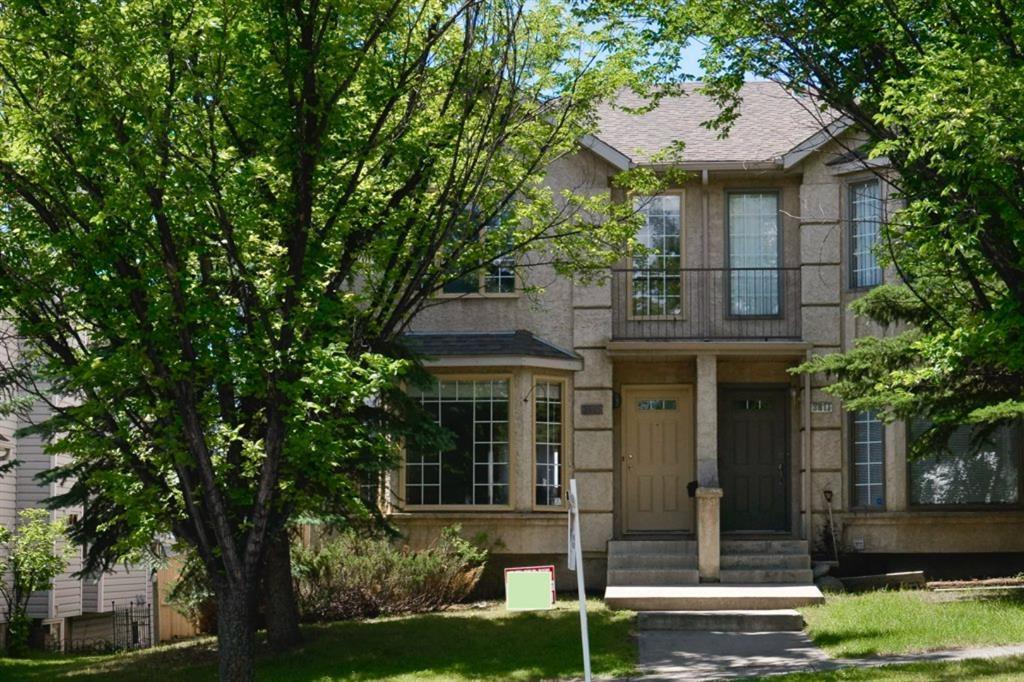 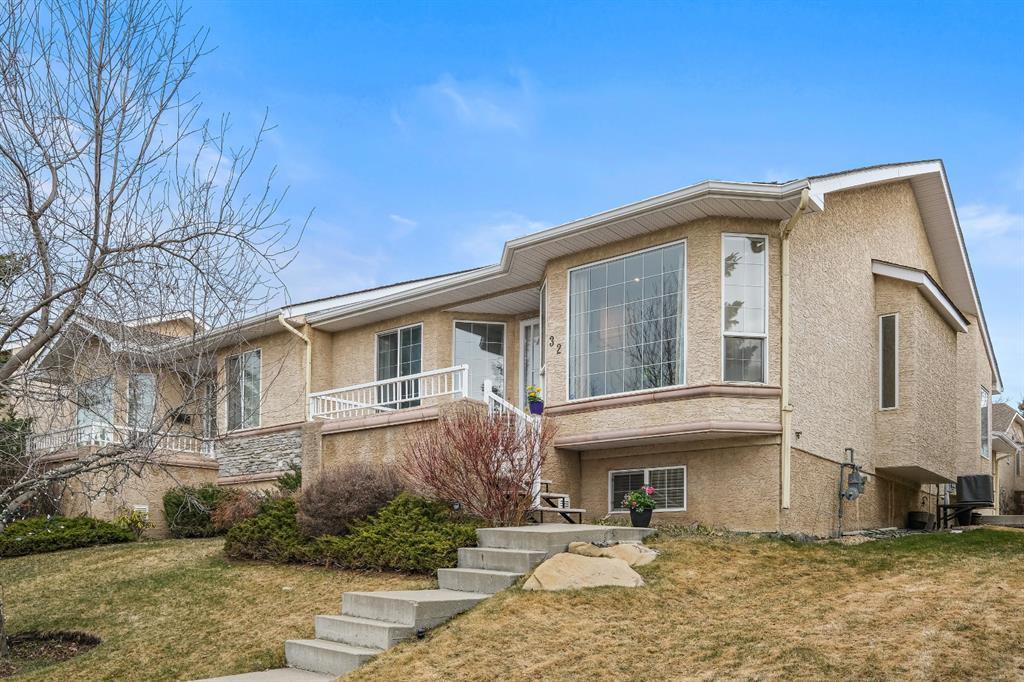 589900.00
32 Sierra Morena Way SW, Calgary, Alberta
GREATER CALGARY REAL ESTATE
Bedrooms
3
Bathrooms
3
Property Type
Single Family
Welcome to this beautiful Bungalow style Duplex with over 2200 sq ft of living space in the heart of Signal Hill. The main floor offers a large foyer with access to the bright Livingroom and formal dining room. The contemporary style kitchen has loads of counter space with quartz counters, stainless steel appliances and breakfast bar. The kitchen is open to the family room which offers a beautiful stone gas fireplace and build-in cabinets. The home offers plenty of natural lighting and sunshine throughout the main level. The side entrance from the kitchen provides access to the side yard patio with privacy screen and easy access to your bbq area. The large Master bedroom offers walk-in closet and large spa like ensuite with free standing soaker tub and elegant shower. The additional 2 pce bath and large laundry/mud room with access to double attached garage completes this level. The basement level offers a very large rec room, TWO more great size bedrooms, a 4 pce bath, large play room/flex room and 2 storage rooms. This home offers plenty of parking with an oversized double attached garage and parking on the driveway for two maybe three more vehicles. New Air conditioning (2014) for those warm summer days. New furnace (2019), New gas line for your BBQ, new garburator, new washer & dryer, new fridge and dishwasher and the last few years. Tons of walking paths throughout the area. A three, minute drive to all the amenities in Westhills Towne Centre. This property has really low HOA fees which covers all snow removal, landscaping, sprinkler system and seasonal clean-up is all taken care of for you. Come and see this home today. (id:31729)
Listing ID A1091813
Salesperson Julie M. Matthewson
Brokerage GREATER CALGARY REAL ESTATE
View on realtor.ca
Open this photo in gallery: 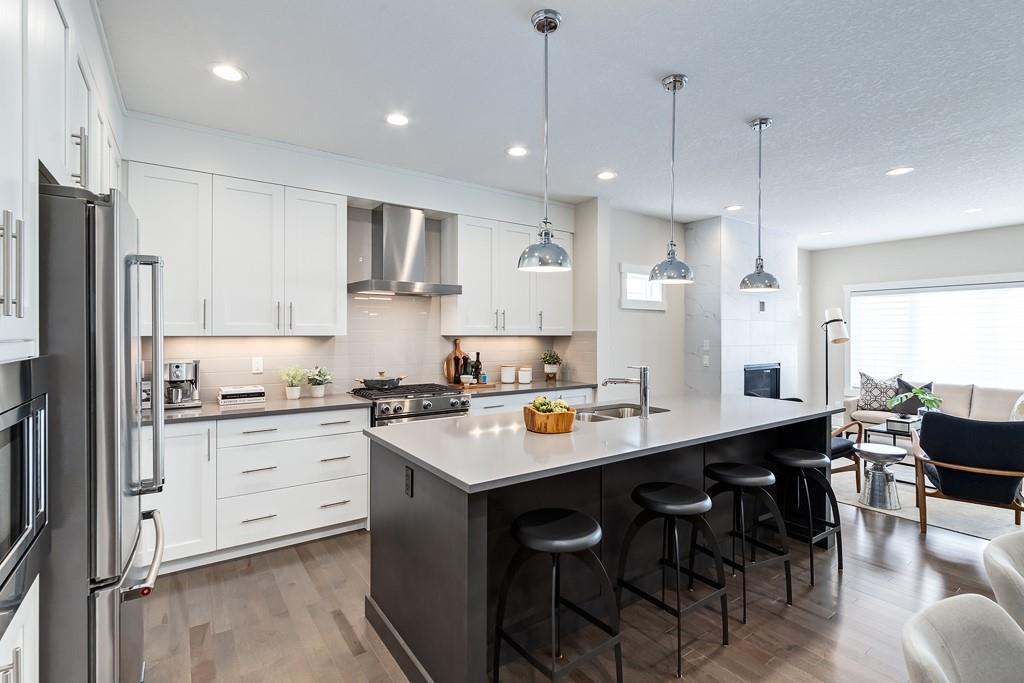 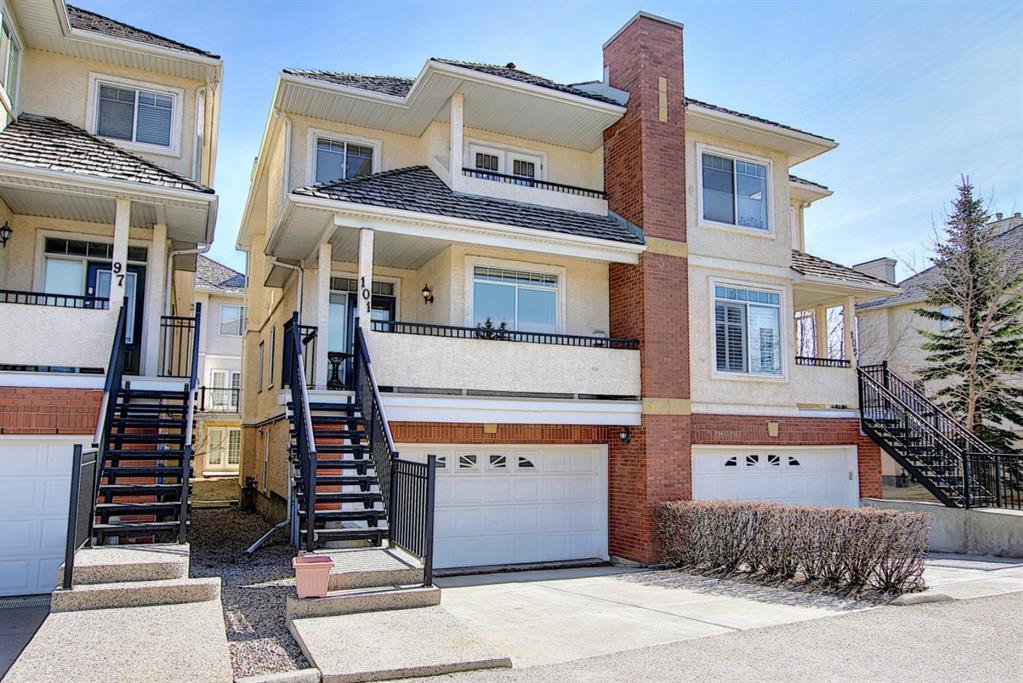 399900.00
101 Sierra Morena Landing SW, Calgary, Alberta
ROYAL LEPAGE BENCHMARK
Bedrooms
2
Bathrooms
4
Building Type
Condo/Strata
Property Type
Single Family
What a beautiful executive style 2 storey townhouse with fully finished walkout basement. Overlooking the Rocky Mountains in one of the best locations in the complex. Great floorplan as well as high end finishing you will be impressed! Upstairs you will find a massive Master bedroom that overlooks the greenspace in the back. It has a beautiful 4 piece ensuite with deep soaker tub, stand up shower & lots of natural light. The Master also has a large walkin closet that has a stacker washer/dryer. The 2nd bedroom is a good size and also has a lovely 4 piece ensuite. It overlooks the Rockies and has a cozy balcony~perfect for morning coffees while enjoying the views. The main floor is absolutely grand~flooded with natural light from the soaring ceilings, loads of windows and the skylight. There is a formal dining room which is large enough for any size dining table and hutch set. The living area overlooks the front of the townhouse and is great for entertaining with corner gas fireplace with mantle & a huge window. At the back of the home is a large kitchen with eatin breakfast nook. Wide open with loads of raised maple cabinets & drawers and plenty of counterspace too. The walkout basement is above ground & boasts infloor heated floors, 9 foot ceilings and massive windows that overlook the greenspace in the back. It is fully finished with a large rec room, 2 piece bathroom and the storage/utility room. The attached garage is accessed through the walkout level as well~ it is a good size 20x20 & is insulated, drywalled and clean. There is a balcony or patio at every turn in here. All with amazing views or tranquil privacy. This executive townhouse is impressive~the floorplan is bright & open. The complex is very well managed & great care is taken to maintain the outside. The pathway system is perfect for people who like to walk, bike or rollerblade. You can go for miles & have the same great views the whole time. (id:31729)
Listing ID A1094309
Salesperson Shawn Hubbard
Brokerage ROYAL LEPAGE BENCHMARK
View on realtor.ca
Open this photo in gallery: 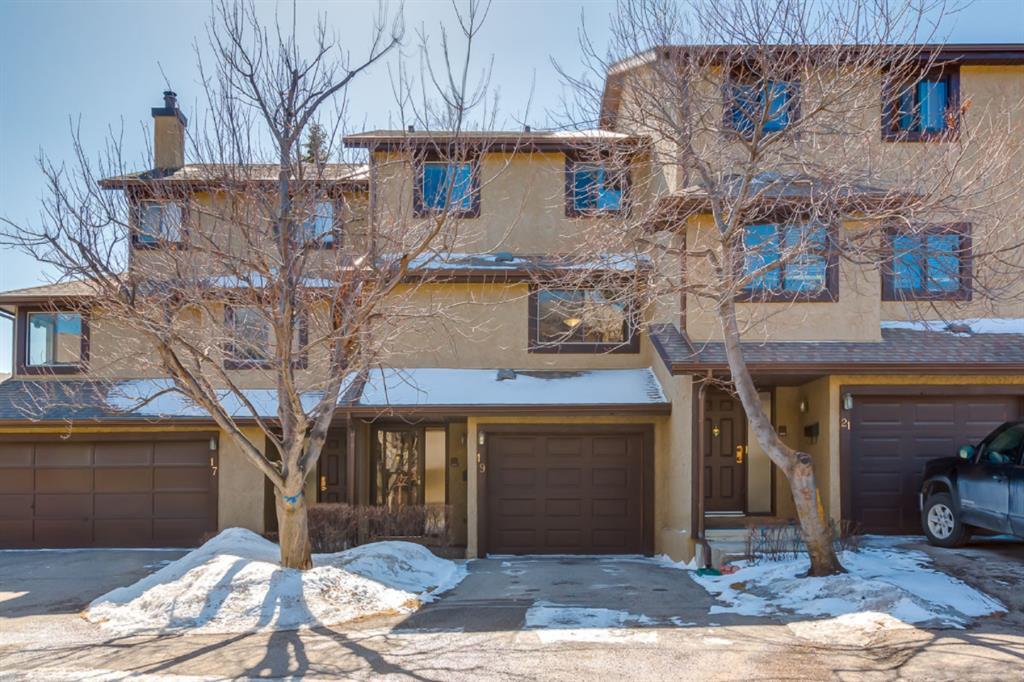 299900.00
19 Glamis Gardens SW, Calgary, Alberta
RE/MAX REALTY PROFESSIONALS
Bedrooms
2
Bathrooms
3
Building Type
Condo/Strata
Property Type
Single Family
Charming four-level split Townhome nestled into the desirable neighborhood of GLAMORGAN with a private backyard.Upon entry, you are welcomed by a spacious tiled foyer with access to your oversized single-car garage suitable for extra storage and additional parking on your private driveway. As you move to the second level, your eyes will be drawn to the beautiful, recently installed natural Maple Hardwood flooring that flows throughout the home. Here you will find the bright sunny living room with a natural gas fireplace. A sliding glass door opens up to a private fenced south-facing back yard. External natural gas lines are installed and ready for your BBQ. As you move to the third level, you will find the kitchen and dining area with recently installed tile flooring, a two-piece powder room, and a loft-style flex area that is perfect for your home office space. The upper level holds the spacious master (primary) bedroom with a three-piece ensuite. A four-piece ensuite bathroom adjoins the large second bedroom. The basement contains the laundry and offers ample storage space. The attic space was updated with R40 insulation within the last four years. You don't want to miss out on the opportunity to view this gorgeous townhome; it won't last long! (id:31729)
Listing ID A1085553
Salesperson Crystal Tost
Brokerage RE/MAX REALTY PROFESSIONALS
View on realtor.ca
Open this photo in gallery: 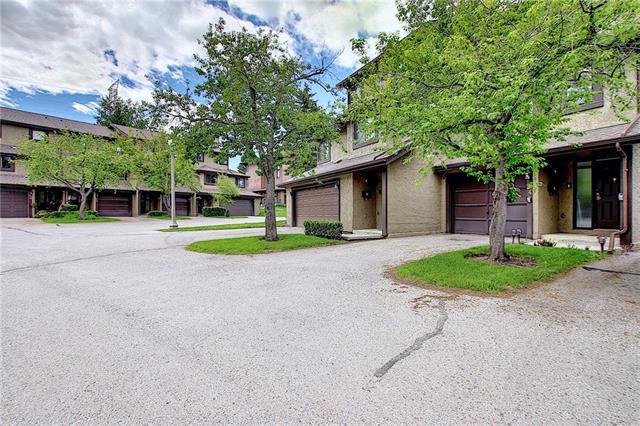 319900.00
24 GLAMIS Gardens SW, Calgary, Alberta
FIRST PLACE REALTY
Bedrooms
3
Bathrooms
3
Building Type
Condo/Strata
Property Type
Single Family
A very well-maintained, 3 bedroom townhome in the desirable complex of Glamis Gardens, this townhouse provides an excellent opportunity to own a home in the SW community of Glamorgan. An attached garage, fenced backyard, & freshly repainted kitchen cabinets and living room with family room, just installed a new hood fan and baseboards etc. The upper level consists of a large master with a 3-piece en-suite, 2 additional bedrooms, & a 4-piece bathroom. A split-level main floor is comprised of a bright kitchen with a breakfast nook, a flex area that can be used as a dining or office area, a living room with a fireplace. The lower level includes access to the single attached garage, a laundry area, & lots of storage space. Access to the fenced backyard is provided off the family room, & the space provides ample room for sitting & enjoying the summer months. Conveniently located steps from parks, schools, access to mass transit, and a two-minute drive to shopping & other amenities. (id:31729)
Listing ID A1077235
Salesperson Jason Choi
Brokerage FIRST PLACE REALTY
View on realtor.ca
Open this photo in gallery: 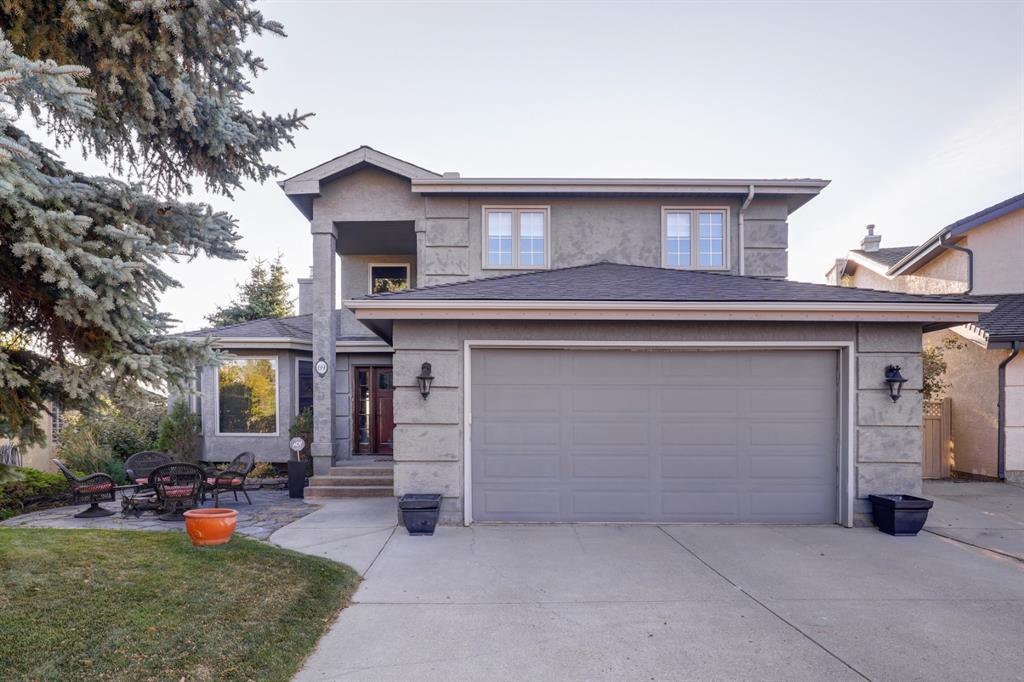