Miguel Cobo and Guylaine Thibault’s Arts and Crafts-style semi, in Montreal’s Notre-Dame-de-Grâce neighbourhood, was originally built around 1930. But when the couple bought the place in 2005, it looked like a bad patchwork of 20th-century design mistakes. Despite its large size – about 3,000 square feet – the house was chopped into too many small rooms, each seemingly from a different era. There was a 1970s, wood-panelled basement, a canary yellow living area that looked very 50s and a dark blue, wildly patterned rug on the stairs that likely wasn’t stylish at any time.

“When I saw the house, all I thought was: oh my God,” Mr. Cobo says. “Guylaine was the visionary. She knew we could make something nice.”

What Mr. Cobo and Ms. Thibault didn’t know was how long it would be before that something nice would come to pass. After moving in, they started their renovation with smaller projects. They ripped out the carpeting (exposing beautiful hardwood) and updating their basement, where they were shocked to find clerestory windows concealed behind the dated faux bois. “Why would anyone do that?” Mr. Cobo asks.

The overall project was put on hold, though, when the two, both mechanical engineers working for Swedish cell phone company Ericsson, were asked to relocate overseas. They thought they’d only be gone for a couple years, at which point they could come home and finish their remodelling. But one foreign posting led to another and over the next decade the couple rented their Montreal home and lived in Stockholm, Madrid and California’s Silicon Valley.

The delay might have been valuable, though, as it ultimately inspired Mr. Cobo and Ms. Thibault’s design direction. In Spain, California and Scandinavia, they were impressed by the number of contemporary, clean-lined homes that maximized indoor sun. Which was an issue with their own dark, warren-like house. Many rooms had small windows or no windows at all, so felt bleak, especially during Montreal’s long, sun-starved winters. “Scandinavia particularly knows how to draw in light, as they barely get any in the colder months,” Ms. Thibault says. “We wanted to do that here. We wanted as much light as possible.”

Glass blocks, that staple of 1980s kitsch, are trendy again

To turn their confused, cave-like space into a coherent, airy abode, Mr. Cobo and Ms. Thibault hired architect Natalie Dionne. The couple found Ms. Dionne by googling “award winning Montreal architect,” then admiring the projects on her website. Much of Ms. Dionne’s work has a minimal, yet warm, aesthetic reminiscent of contemporary Scandinavian design – white walls, blond oak, black cladding (all the better to absorb more sun). Ms. Dionne also had another important asset: her business partner, Martin Laneuville, an architect with a specific interest in lighting (prior to joining Dionne’s firm, he spent 10 years working in cinema).

“From the street, we really had to respect what was there before,” Laneuville says of Mr. Cobo and Ms. Thibault’s house. “There are fairly strict bylaws in their neighbourhood. From the inside, though, it was a total gut. It wasn’t possible to see through the outside in many spaces before. We wanted to open it up completely.”

Fittingly, from the front, the house looks much as it would have in the 1930s, including the original brick archway surround the main entrance. The interiors, though, are now radiant. Light sweeps from new windows along the side (all of which are frosted, to maintain privacy) and through a wall of sliding glass door panels at the back of the house that open onto a covered patio. To let as much sun pass through as possible, almost all the interior partitions have been removed, with the living room, dining area and kitchen all flowing as one continuous space (the only walled-off areas on the main floor are a powder room and a pantry).

And whereas the home was previously a palimpsest of different design styles, the hodgepodge has been replaced with a minimal, unified aesthetic. A couple of mismatched, mid-century additions, for example, that used to jut into the rear yard, have been updated with a single, sleek volume clad in black, clean-lined cement panels. Inside, though few of the old-timey details remain, one that does, the ornate, oak staircase that leads up to the second level, is also now black, giving it a sense of coherency with the achromatic colour scheme.

Having such dark focal points might seem antithetical to a home built for light. But the black acts as a foil, accentuating and underscoring adjacent, sun-filled areas, such as the all-white living area near the stairs, or the white and blond oak kitchen housed, in part, within the addition.

“We weren’t concerned about the black when Natalie showed it to us,” Ms. Thibault says. “Not really, anyway. And now the house in done, the black marries really well with everything else.”

Mr. Cobo and Ms. Thibault’s desired, light-filled spaces are as well-executed on the upper level as the ground floor. Their bedroom has a Juliet balcony with a steel guard rail playfully laser-cut with giant polka-dots, all set within a wall of windows that looks out over the backyard. The ensuite also has a large window, though, like the glazing on the ground floor, it’s frosted to prevent peeping.

“In Scandinavia, they don’t use curtains because they don’t want to block the light,” Mr. Cobo says. “We weren’t willing to go that far, but we like the milky treatment on the glass.”

To ensure the illumination is no less impressive at night as during the day, Laneuville used his cinematic sensibilities to imbue each room with thoughtful, evening illumination. Strips of LEDs and tiny pin lights are discreetly tucked in unexpected crevices – the track of a curtain, narrow reveals in the kitchen. When on, the wash the nearby walls in warmth, as though a bit of sun has uncannily found a crack to shine though.

Such thoughtful details make Mr. Cobo and Ms. Thibault happy to finally be settled back at home, after so long away. Although the two loved their time abroad – “We were very lucky to have those opportunities,” Ms. Thibault says – now that their place is finally done, the couple have no plans to move anytime soon. “These days, I’m lucky that sometimes I can work from home,” Ms. Thibault says. “it’s just so nice in here.” 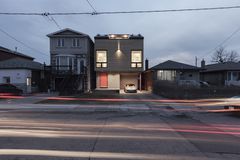 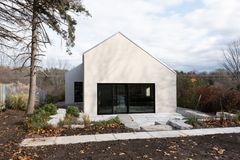 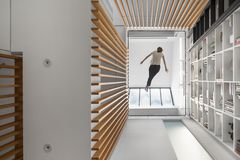