When the “For Sale” sign went up outside his Dunrobin, Ont., home in earlier this year, Ben Rousseau had hoped it would attract attention from far and wide.

Mr. Rousseau’s “For Sale” sign was found a few weeks ago, 125 kilometres away in a Quebec farmer’s field. The farmer posted a picture of it on Facebook.

Mr. Rousseau figures the sign was carried there by the same tornado that destroyed his and 50 other homes in late September as it ripped through Dunrobin (about 35 minutes from Ottawa’s downtown) and carried on across the Ottawa River into Gatineau with winds upward of 265 kilometres an hour.

Mr. Rousseau listed his three-bedroom, three-bathroom home for sale in late August. Built in 2003, he and his wife, Jess, and their two children have spent eight years there.

The foundation is all that’s left now, and even that might have to be replaced. It’s up to the insurance company.

“The sign being found sparked everyone’s memory from the tornado,” Mr. Rousseau said. “What I hope happens in three or four months is that people don’t forget what people like us went through.”

Six tornadoes touched down in the Ottawa-Gatineau area on the evening of Sept. 21. The one in Dunrobin was the most powerful. Another tornado hit the neighbourhoods of Arlington Woods and Craig Henry, with wind speeds of up to 220 km/h.

The tornadoes were the strongest storms in recorded memory in the Ottawa area, according to Environment Canada. Dozens of people were treated for injuries.

“It’s in the top two or three traumatic events that have affected our city,” Ottawa Mayor Jim Watson said at a news conference the morning after the tornadoes touched down.

While communities such as Dunrobin and Arlington Woods are rebuilding, observers say the overall Ottawa real estate market – which has been one of the strongest in Canada in 2018 thanks to record employment numbers – will quickly recover.

Joanne Goneau, a broker with Re/Max Absolute Realty Inc., has sold real estate in Ottawa for 32 years. She said she was shocked by the tornadoes, but doesn’t believe the two markets that were most affected will lose their appeal.

Arlington Woods is only 15 minutes from Ottawa’s downtown and is a desirable location, she said. Neighbourhoods such as that will remain interesting to prospective buyers.

Although Dunrobin is farther away, it has become an increasingly popular community for young families such as the Rousseaus.

Sales in the area have increased 24 per cent over the past three years, said Mary Lou Morris, a real estate agent based in nearby Kanata. She expects a decrease in sales next year, but once damaged homes are again fit to sell, they’ll be of better quality – built with better materials under a stricter building code.

Most people will treat the tornado as a one-off, said Ralph Shaw, president of the Ottawa Real Estate Board.

“It’s like when a tree loses its leaves in the winter time and then rejuvenates. I think you’re going to see that rejuvenation in Dunrobin with a lot of new builds.”

Greg Patacairk, who has been the president of the Dunrobin Community Association for 10 years, estimates it will be close to 18 months before the village of Dunrobin will be back to normal.

“Right now, we’re seeing those who’ve lost their house go from shock to the reality of the journey ahead,” Mr. Patacairk said.

With upward of 40 families looking for short-term housing while their homes are rebuilt, it has been a difficult task to get everyone situated, given Ottawa’s tight rental market.

Ottawa has never experienced a rental market such as its current one, Mr. Shaw said. While 3-per-cent to 5-per-cent vacancy is considered healthy, Ottawa is at less than 1 per cent right now.

“It’s a tough time on so many levels,” he said.

Thankfully, Mr. Rousseau said, no one was home the night the tornado hit his Dunrobin home. His family has since signed a one-year lease on a home in Stittsville – about 25 minutes from Dunrobin.

They had put a deposit on a new build in the town of Carp, about 10 minutes from Dunrobin, but have decided to move back to where their home was. His wife is seven months pregnant and although they had a lot of showings, they had no offers.

“I think – for our kids and our sanity – it doesn’t make sense to keep uprooting our kids and moving,” he said. “It’s been a whirlwind. … No pun intended.”

In Craig Henry, about two kilometres from Arlington Woods, Shriefe Woods is selling her three-bedroom, 1½-bathroom townhouse. She listed it in July and she said interest in the home has actually increased since the tornado.

“Some people actually wanted to see the area as well. We did get a pickup after the tornado, but it’s calmed down again,” she said. “[People have had] questions and we’ve answered them, given the knowledge we’ve got.”

Ms. Woods said the side facing the street was damaged in the tornado, there was “slight” damage to the roof and she lost the fences on either side of the home in the back. The condo corporation has committed to fixing what remains.

Although the tornadoes in Ottawa were a rare occurrence, Canada has seen its share of natural disasters.

Witness Fort McMurray, Alta., where the real estate market has bounced back nicely after widespread forest fires saw more than 2,000 residents displaced from their homes in 2016.

Lisa Hartigan has been with Coldwell Banker in Fort McMurray for 12 years. Sale numbers in 2018 are up more than 62 per cent from last year and the average house price is up 12 per cent, she said.

Prior to the fire two years ago, the town was struggling. Ms. Hartigan didn’t sell a house in the first quarter of 2016 and the average home price was down $200,000 year over year because of the impact of the downturn in the price of oil.

“There were so many job losses,” she recalled. “A lot of people were laid off and there was no construction going on. Coming back after the fire, people were unsure what was going to happen, so there was a burst in the market. People were in panic mode and buying up things really quickly.”

“I hate to say this, but the fire was one of the best things that happened to Fort McMurray in terms of getting things going again. It turned things around for the better.”

And while it’s hard for Mr. Rousseau to know when things will get better – his days are spent mostly talking to insurance companies, city staffers and construction teams – he takes solace his family is safe and the community continues to rally around those who suffered great losses.

“I go to the house all the time and it’s back to normal for those who are living around there,” he said. “But obviously for us, it’s not normal.”

Are tornadoes in Canada on the rise? A look at the dangerous storms
September 27, 2018 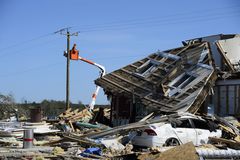 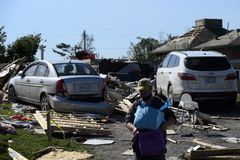 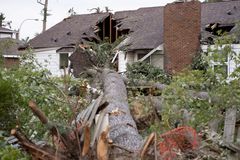