Toronto is barely a month into enforcing its rules for short-term rental (STR) accommodations, but already some of those who run so-called “ghost hotels” are slipping through gaps in the regulations.

Despite having passed its by-law in 2017 and having delayed applying its regulations for most of 2020, in its first report to city council on STR enforcement the Municipal Licensing & Standards (MLS) department presented a regime that is still a work in progress.

The city’s rules say registered STR landlords may rent only their primary residence, but also allows them to rent up to three shared rooms in their primary residence. Airbnb, the largest platform remaining in operation in Toronto, has taken the position that a STR “host” on its platform with dozens of listings under one identity is not necessarily in violation of the rules because they could be a property manager taking care of multiple legally registered units.

MLS reports some of the other major platforms have taken steps to comply with regulations: Booking.com has removed Toronto STR listings without registrations, while Tripadvisor and Expedia (which operates VRBO) have shut down STR operations in the city.

According to MLS, between Jan. 8 and 11, Airbnb restricted the booking options for listings without a registration, which keeps them on the site but allows them only to be rented for a longer-term stay with a minimum 28 days. Airbnb hasn’t said how many listings that affected, though activists who collect third-party data on the platform say at least 7,500 listings have converted to longer stays. In some cases, there are Airbnb hosts with one or two registered listings, and a dozen or more unregistered ones. By leaving unregistered listings on the site, critics warn STR platforms may be inviting landlords to bend the rules to keep operating, critics say.

“Our fear is they will find their way back as a short term rental,” said Thorben Wieditz, a researcher and spokesperson for Fairbnb, an activist group supported by the hotel industry and tenant rights organizations. Mr. Wieditz says keeping ineligible STR listings on the site in long-term format is a loophole, one that’s been used in other cities with STR regulations. “We’ve seen this in Los Angeles: often these operators use Airbnb as a marketing platform, there’s a bait and switch where they take the transactions off the platform to make even more money.”

When it comes to approving the registrations required to operate a short-term rental listing the MLS report issued Feb. 1, 2021 said it had received 3,263 applications and approved 2,744 with 326 under review. That’s still well short of the roughly 15,000 short-term stays listed in Toronto before the regulations took effect. MLS has already cancelled 34 registrations, denied 15, revoked 9 and has 136 registrations it intends to deny.

To enforce the rules, MLS needs data. Airbnb has said it created a city data portal for regulators to access details about its hosts. In its report, and in answers to media questions, MLS has suggested that portal may be insufficient for its enforcement needs and is preparing to award contracts to third-party services to scour the site to augment Airbnb’s disclosures.

“Municipal Licensing and Standards is in the process of utilizing data-scraping techniques to identify the listings that do not have a valid City-issued registration number. This process is underway and will take time to complete,” said city spokesperson Lyne Kyle.

Fairbnb’s own data-scraping efforts claim to have found 1,300 listings using a duplicate permit and 300 claiming to be “exempt,” (an example of exempt listings are those managed by another tech company, Sonder, that claims its portfolio is made up of hotel rooms only).

“What we always understood was we would have a level of platform accountability, where platforms could only post and advertise listings that have valid city-issued permits,” said Mr. Wieditz, who said it should be trivially easy for a technology company to automatically weed out fake STR numbers. Mr. Wieditz compared the current complaints-based approach – focusing on individual landlords and not the platform – to playing a game of Whac-a-Mole where the 10 city staff assigned to STR regulations are vastly outnumbered.

The city provides a copy of its STR registration database on its open data portal, but identifying information is scant, which makes it difficult for residents or potential STR guests to identify whether a listing is complying with the by-law.

The MLS data provides only the registration number (which a listing is required to display), the ward it’s located in and the first three digits of the postal code attached to the registry. These digits represent what’s known as forward sortation area codes (FSA) and when STR registrations are sorted into the 96 FSAs in Toronto’s city boundaries, it’s clear the vast majority of legal listings are located in the downtown core.

The M5V FSA – stretching between Simcoe Street and Strachan Avenue between the lake shore and Queen Street West – covers some of the most condominium-rich sites in the city and accounted for 300 registrations, more than 10 per cent of the total. The next largest is next-door, M5J, with 173. Another almost 300 registrations had no FSA in the registry. According to MLS, that’s a data error it is working to correct.

Note: Short-Term Rentals. A short-term rental is all or part of a dwelling unit rented out for fewer than 28 consecutive days in exchange for payment. This includes bed and breakfasts (B&Bs) but excludes hotels and motels.

Note: Short-Term Rentals. A short-term rental is all or part of a dwelling unit rented out for fewer than 28 consecutive days in exchange for payment. This includes bed and breakfasts (B&Bs) but excludes hotels and motels. 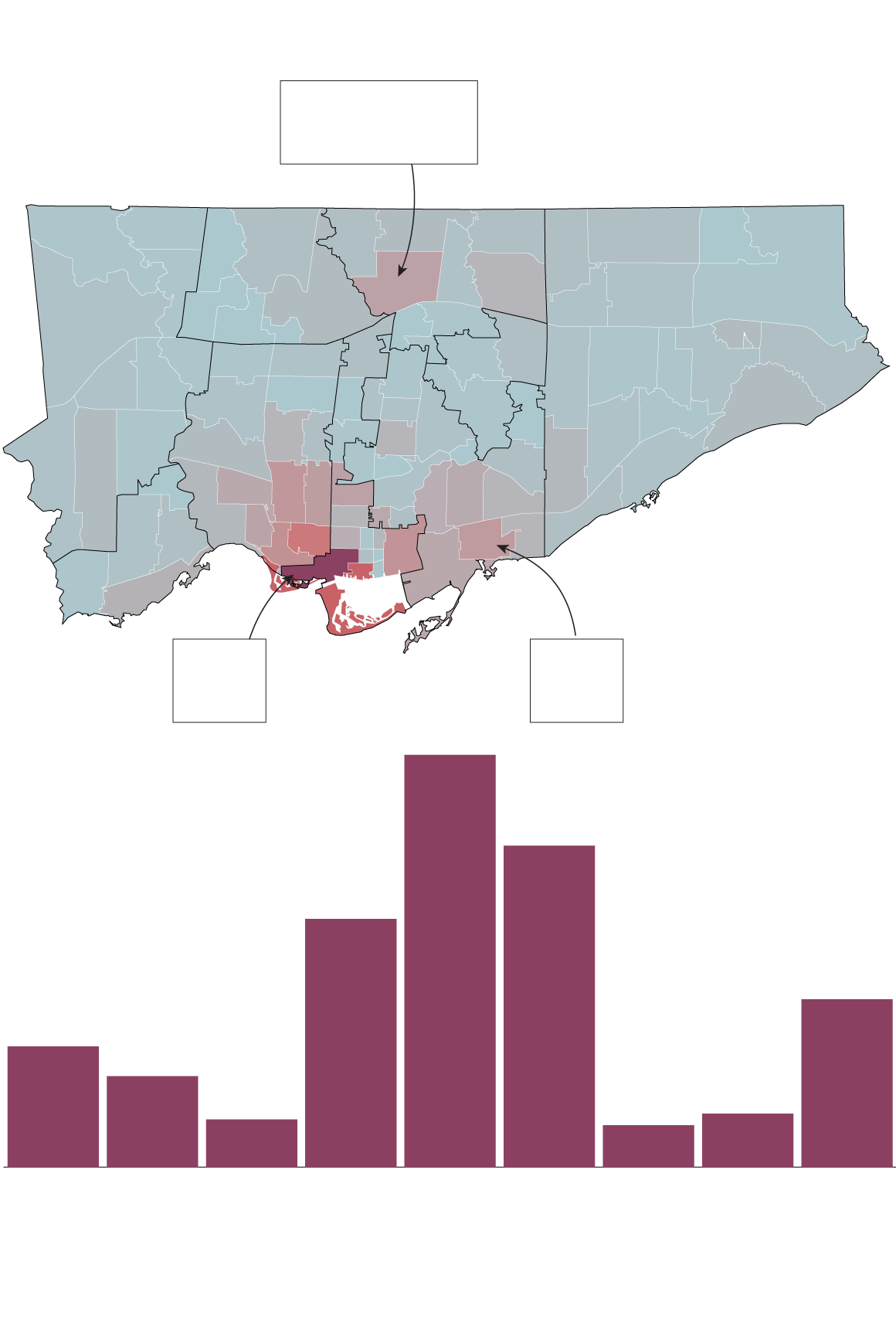 Note: Short-Term Rentals. A short-term rental is all or part of a dwelling unit rented out for less fewer 28 consecutive days in exchange for payment. This includes bed and breakfasts (B&Bs) but excludes hotels and motels.

murat yükselir / the globe and mail, source: City of Toronto

The Globe and Mail analyzed a small sampling of some of the city’s largest multi-listing ghost hotel operators and found several examples of potential registration flaws.

One ghost hotel proprietor The Globe has reported on in the pastis Ke (David) Wang, who owns multiple rental buildings in Toronto but has been running a high-volume STR at 45 Mutual St. since at least 2014. There are a dozen Airbnb listings for 45 Mutual, some shared rooms and some entire apartments, under the identity Paperbox Property Management , which have four different legal registration numbers attached. It is legal for a tenant to sub-lease their apartment on Airbnb with some restrictions, but the city’s database doesn’t offer clues as to how Mr. Wang acquired four different registrations for his business. Mr. Wang did not respond to a request for comment.

A few doors down is 39 Mutual St., a building owned by Mr. Wang’s mother, Hui Ming Zhang, that has four more whole-home apartments for rent under Mr. Wang’s Paperbox’s portfolio. They are all using a single STR registration that is not valid (City staff confirmed an application has been received but not yet granted).

Other examples The Globe found included a “superhost” using the identity “Arthur” on Airbnb with 27 listings. Arthur has a half-dozen co-hosts connected to his listings, but even among the co-hosts there are registration numbers that appear ineligible for the units they list: one host used the same registration number for a condo apartment rental, and four shared rooms in a different part of the city. Other hosts, such as “Shaz and Kanwal” and “Golsana” seem to be using the same registration for at least two separate condo apartments. Other hosts list too many shared rooms on one registration.

The MLS report said it had so far issued one notice of STR rules violations and four charges since between Jan. 1 and Jan. 24, on 96 complaints. Two of the potential charges related to a STR landlord without a registration, two related to running a STR outside of a principle residence. Under questioning from the councillors, MLS clarified that some of those charges were merely in process and not yet issued. Last week, council sent the report back to the Planning and Housing Committee for more study.

“So far, we refrained from going after MLS, we had a lot of respect and sympathy for how difficult it is to deal with this. But I think they can do better and should do better,” Mr. Wieditz said. “We’re just at the beginning of it but I am already shaking my head, they had months and months to get ready, but so far I’m not impressed.”