A former horse-drawn carriage depot in Montreal’s Villeray neighbourhood is the staging ground for a bold architectural exercise in minimalism.

The single-family house on a corner lot also offers a striking contrast between its unusual black-brick, boxy exterior and spacious, light-filled interior.

It’s a concept brought to fruition by owners Dominique Jacquet and his wife/associate Anne Sophie Goneau, who have stripped the 1910 building down to its basics and orchestrated a series of cleverly interlocking spaces over two storeys.

The hangar-like building, across the street from an imposing Roman Catholic church, was transformed into a home decades ago, boasting a highly desirable, not so commonplace amenity in these parts: a two-car garage.

Needless to say, the house’s all-black exterior makes it stand out next to its more subdued neighbours. “For sure, people’s eyes open wide when they see it,” Mr. Jacquet said on a recent visit.

One of the reasons the two associates decided to go with black was to demarcate the house from the dominating presence of the church, to – as it were – get out of its shadow. This is their third residential project in the area and one of the previous structures is an all-white, minimalist cube of a house. Don’t try to read anything into the use of white and black palettes: There is no pattern or theme at work here, Mr. Jacquet stresses.

For their latest project, the couple decided to create a mudroom/storage/laundry room off the garage to accommodate the messy comings-and-goings of family members.

The more public front entrance, off the sidewalk, is recessed; once inside, you enter a narrow vestibule offering an avant-goût of what’s to come: polished, heated concrete floor, large square window and wood partition with adjoining full-length mirror.

Around the corner is an extensive open space combining the dining area, kitchen and lounge.

Heightening the sense of openness is a huge, floor-to-ceiling sliding door that gives onto a compact terrace and allows natural light to flood into the open-concept room.

Starkly offsetting the grey hues predominant throughout the ground floor is a massive wood wine-storage unit behind a glass wall.

A gas-burning fireplace is embedded in the white wall unit next to the wine cabinet.

“Certainly there’s a minimalist, Scandinavian inspiration,” Mr. Jacquet says about the house. “It has a timeless appeal. It’s very elegant, sober but distinctive at the same time.”

The smooth, unadorned surfaces and widespread use of a grey palette on the ground floor serve to accentuate the way the space is broken up into blocks of different dimensions: the quartz-covered island, the bay area with its stove top and the refrigerator surrounded by cabinets, which have chamfered edges rather than handles.

Just off the kitchen is a walk-in larder, and nearby is a powder room entirely covered in reflecting deep-blue tile. A floor-to-ceiling mirror helps open up the narrow, confined space.

Revamping a house/former carriage depot had its share of surprises. Instead of load-bearing walls, there were four oversize steel beams – a positive because there was no need to add support to compensate for knocking walls down, Mr. Jacquet says. However, extra work was required to replace the rotting wooden columns at either end of the structure holding up the beams.

Another surprise: The floorboards covered a concrete base dating back to the original construction of the depot. Structural problems necessitated the breaking up of the base and its replacement with a new surface.

The cool look downstairs warms up a bit as one heads upstairs on a white oak stairway hidden behind the kitchen’s massive fridge-cabinet wall; the passageway to the second floor gets lots of natural light from a large window, actually a doorway in the house’s previous incarnation.

The flooring throughout the upstairs is also white oak. At the top of the stairway, plants in a huge terrarium bask beneath a skylight. The cube-shaped greenhouse is yet another manifestation of the designers’ clever deployment of different geometric shapes within the house interior. It also adds a welcome splash of greenery to the upper-level living room. Hidden lighting in the terrarium’s base highlights the plants at night; it’s an indoor version of the similar mood lighting on the climbing vine that screens the outdoor ground-floor terrace from the sidewalk.

Off the second-floor living room are three bedrooms. Another distinctive feature: Their doors are floor-to-ceiling and they slide.

“We wanted the smaller bedrooms to have a look that can be either residential or office,” Mr. Jacquet said. “With more people working from home, it’s nice to have the option to set up an office.” The door format also follows the strong theme of long vertical lines throughout the house, Mr. Jacquet added.

The master bedroom and en-suite bathroom are in a separate quarter of the house, at the end of a passageway, over the garage. The bathroom boasts a large mirror running the length of the marble counter. White tiles cover the floor and walls. Two sides of the shower cubicle are made up of frosted glass and are integrated into the bedroom, providing a warm glow when the bathroom light is on.

Another massive sliding door opens out onto a second terrace, this one with porcelain tiles. The view takes in the bell towers of the church, Notre-Dame du Rosaire, completed in 1917.

“What struck us as a most interesting aspect is the location on a corner lot, which is fairly rare,” Mr. Jacquet said. “The semi-detached house offered an excellent opportunity for a complete revamp that would appeal to people who don’t want to leave the city, but require a lot of rooms, bathrooms, storage space and don’t want to bother too much with upkeep.”

“There are not that many projects where everything has been completely redone,” Mr. Jacquet said.

Cranes swing back into action as COVID-19 pandemic restrictions begin to loosen
May 6, 2020 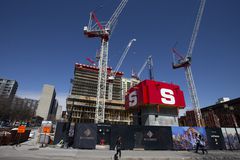 A Montreal home that squeezes plenty of charm in a narrow space
February 28, 2020 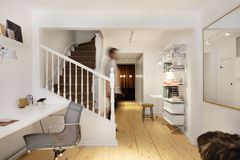 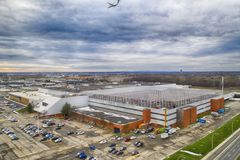