On a site tour earlier this month of Toronto’s first substantial “tall timber” project, the developer, Jeff Hull of Hullmark Developments, good-naturedly encouraged visitors to hug the columns – should they feel so inclined.

In fact, as contractors have been installing the sturdy “glulam” columns in Hullmark’s new post-and-beam building at 80 Atlantic Ave. in recent months, architects and developer officials have been spotted occasionally embracing these impressive objects.

It’s not difficult to see why: After years of eager hype about the environmental and aesthetic virtues of “tall timber,” Hullmark, with partner Bentall Kennedy on behalf of Sun Life Financial, has become the first Toronto developer to hack through the regulatory and commercial underbrush to produce a building constructed with these materials – in this case, a 90,000-square-foot, five-storey office building linked to a 2012 Hullmark warehouse conversion project at 60 Atlantic that has won several design awards. As Mr. Hull says, “We recognize that we are pioneering a new construction typology.”

Other tall timber developments are now in the pipeline, including 77 Wade, an eight-storey Junction Triangle office building being promoted by the Next Property Group.

Quadrangle is the designer for both Atlantic projects. The concept, project architect Richard Witt says, was to create a 21st-century version of the late 19th-century Liberty Village warehouse. The design replicates or updates features like flexible open-concept floor plates and punched-out windows, while creating spaces that lack some of the literally grittier qualities of old warehouses, such as draughty windows, tangles of exposed pipes and ducts and plenty of brick dust.

This project – which opens next year and will have Universal Music Canada as its lead tenant – hides all the building systems between the floors, which means all those huggable wooden beams and columns will be fully visible, Mr. Witt says.

As is typical of such projects, the design relies on two sorts of engineered wood products: glue-laminated (“glulam”) columns and nail-laminated timber (NLT) panels, which are bundles of 2x8 or 2x10 black spruce beams topped with plywood.

Michael Krans, president of Timmerman Timberworks, the Barrie-area custom installer that supplied the materials, says the project required about 2,600 cubic metres of these beams and panels. “While 80 Atlantic certainly looks big,” he says, “it’s not entirely in a league of its own.”

Tall timber, of course, is an increasingly common building form in parts of Europe, as well as British Columbia. These kinds of materials have been used for many years in smaller residential and commercial projects, as well as some institutional buildings, such as the Art Gallery of Ontario’s Frank Gehry addition. But Ontario’s outdated building codes prevented their use in larger commercial ventures until changes adopted last year that allow builders to go up to six storeys.

The sustainability benefits are undeniable. Building materials such as concrete and steel generate high levels of emissions, whereas the use of wood beams sequester carbon for the life of the building.

While relaxed regulatory obstacles should make projects such as 80 Atlantic easier to launch, developers that want to build with engineered timber face another, and somewhat ironic, dilemma, which is limited supply.

Despite Canada’s vast forests, only a handful of mills produce these kinds of wood products, which means developers and subcontractors such as Timmerman need very long lead times to secure their supply. The two largest are Nordic Structures and Structure Fusion, both of which are based in Quebec.

What’s more, because so few developers have worked with tall timber, there aren’t many structural engineers and architects in the Toronto region with the necessary experience and expertise.

This is the dilemma confronting Sidewalk Labs, which has said it wants to make extensive use of tall timber construction in its Quayside projects, which, once built out, will consist of about 3.3 million square feet of occupiable space – almost 40 times more than Hullmark’s Atlantic Avenue building. “We would absorb almost all of the product available in Canada,” says Karim Khalifa, Sidewalk’s New York-based director of building innovation.

Sidewalk, moreover, won’t be the only developer looking to secure building materials and professional expertise. “It seems like we’re on the edge of enormous growth for mass timber,” says David Bowick, a structural engineer with Blackwell who is working on 77 Wade. “The demand is about to far outpace the capacity.”

He thinks there’s enough know-how in the Toronto region to meet all this pent-up demand, but Mr. Khalifa isn’t so sure. Sidewalk in recent months has convened large meetings of local developers, designers and even representatives of the skilled trades, such as carpenters, to pitch their tall timber plans and encourage them to gear up to bid on eventual projects. “I think there’s a good foundation, but it needs to grow.”

These bottlenecks, in fact, could make or break Toronto’s tall timber ambitions.

As Mr. Hull points out, the Atlantic Avenue building involved more than the usual amount of risk for a project of that size. While the updated warehouse concept certainly adds a cool factor, the location and the supply issues added enough uncertainty that Mr. Hull’s team has decided to position 80 Atlantic as a “premium” building that will allow its tenants to associate their brands with an innovative green project. But, he adds, “You never really know [if such strategies will work] until someone signs a lease.”

In Sidewalk’s case, however, the calculus may be different because much of the Quayside development will be highly price-sensitive residential projects with a substantial affordable-housing component – all of which means the company will have to aggressively manage all the project costs, especially those associated with hard-to-source materials such as large quantities of engineered wood. 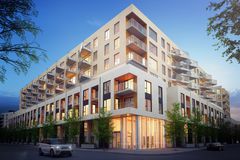