In the past 12 years, the city of Toronto has boomed in population, jobs and property values, but one key measure in the city has been shrinking: the amount of land zoned purely for employment has shrunk by almost 10 per cent.

The key driver of this erosion has been the creeping encroachment of residential development on some of the land protected for employment use only. According to the city’s planning department, in 2006, there was 8,941 hectares of land devoted to commercial uses such as factories, retail, warehouses and office buildings; by 2018 that number had slipped to 8,063 hectares (9.8 per cent less).

While roughly 900 hectares seems like a postage stamp in a city spread across 63,000 hectares, it’s the equivalent of six High Parks or four Downsview Parks converting from just employment to other uses.

According to Kerri Voumvakis, director of strategic initiatives, policy and analysis at Toronto’s City Planning Division, it’s almost always a one-way street. In fact, she can only recall one instance in her 30-year career where land zoned for residential was converted back to commercial use (a 2012 case where pharmaceutical-maker Sanofi Pasteur Ltd. was able to rezone an empty lot next to its Steeles Avenue West facility).

Even though the city has strong official plan standards that mandate any mixed-use rezoning must make space to replace the same number of jobs that existed on the site previously, it’s also clear that not all jobs need the same amount of space. Simply put, there may be fewer factory or warehouse jobs in the city, but they require much more land.

“Not everyone’s going to work in an office environment,” Ms. Voumvakis said. “Having a broad-based economy, where Toronto has warehousing various manufacturing clusters of employment, it provides a better array of employment opportunities within the city’s boundaries.”

“Toronto is the second- or third-largest centre for food and beverage manufacturing in North America,” said Shauna Brail, director of the urban studies program and senior associate in the Innovation Policy Lab of the University of Toronto’s Munk School of Global Affairs. Dr. Brail sees both the potential in unlocking employment lands for new development – such as the “oversuccess” of older examples of rezoning in King-Spadina and Liberty Village – and also the drawbacks.

“It’s a growing city. Part of making space for more people means building more residences, but what if we develop a place that has far more residents than employment? That’s a very inefficient way to create space,” Ms. Brail said.

Oftentimes, Ms. Voumvakis said, residential transformations tend to sneak up on employment-only zones in a multistage process. “When you have retail at the edges of employment areas, historically what you started to see was pressure for those retail areas to become residential,” she said. “When the residential areas exist, you get pressure on the interior employment lands [to convert].”

The Toronto Board of Trade recently published a report calling for better protection of these employment lands noting that time and again “employment areas … are crowded-out by residential, and residentially focused, mixed-use development in growing cities like Toronto.”

The Board called for a better defining of what these lands are for and who should promote them, and also a harmonizing of Toronto’s employment zone planning with those in nearby municipalities. 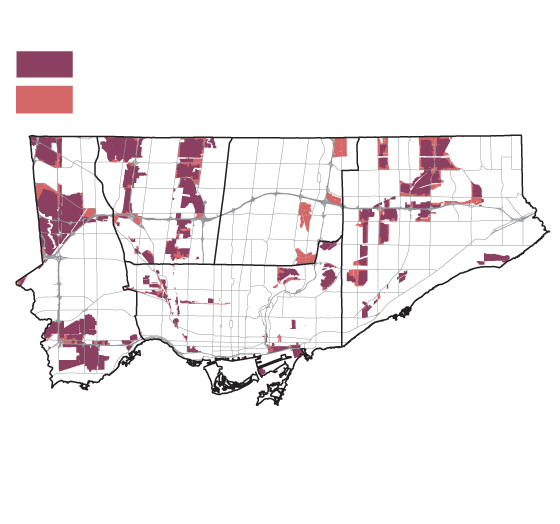 THE GLOBE AND MAIL / 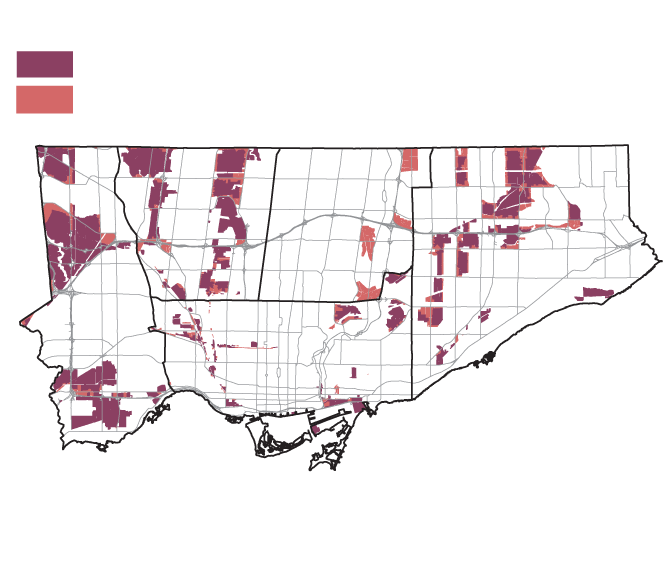 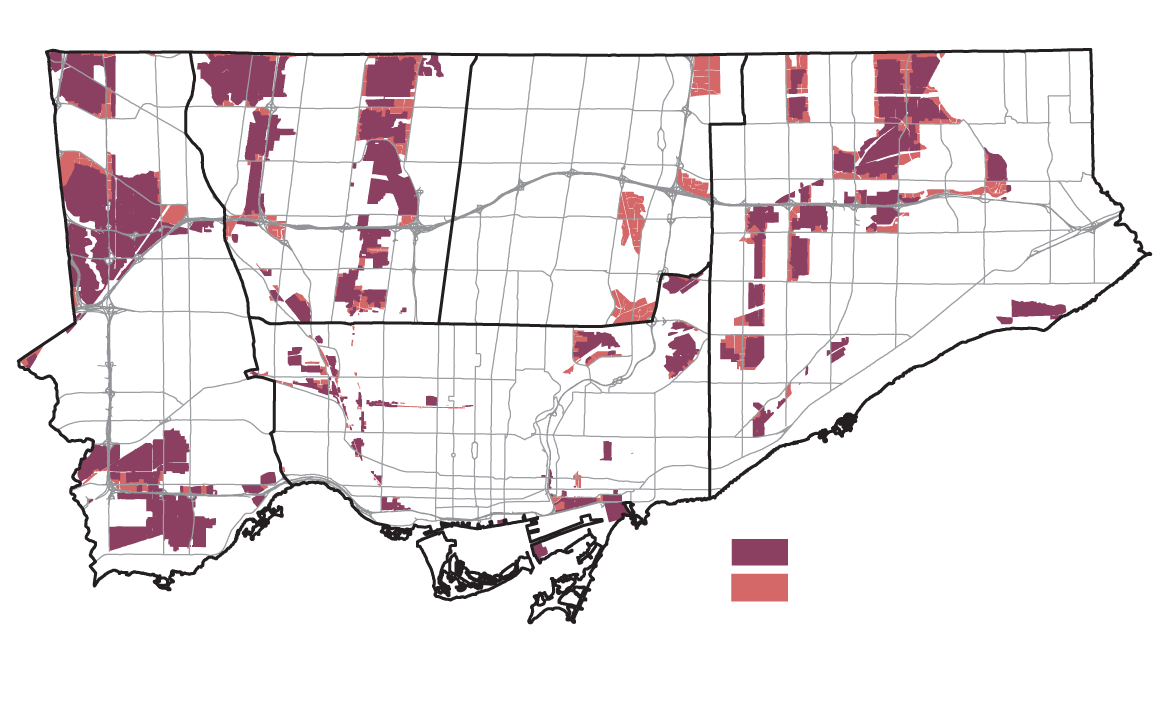 If the city doesn’t move fast, the report warns, the city’s existing vacant industrial land could be absorbed by 2031, “after which time, any new industrial production would be dependent on the redevelopment of existing properties.”

One example of the kind of slow residentialization of manufacturing lands can be found at a 2.76 hectare site at 1001 Ellesmere Rd., which until 2008 was home to a 17,744 square-metre metal-stamping factory. As part of the formulation of the city’s 2013 official plan, the owner, The Goldman Group, applied to make the whole site mixed use. The city allowed only half the land to convert to mixed use. The developer appealed to the Ontario Municipal Board to turn the site 75 per cent residential and, in 2015, succeeded in getting a ruling from the quasi-judicial tribunal to allow for 95 townhouses (under construction now by Mattamy Homes) and employment requirements that would be met by a four-storey office building squeezed onto the edge of the lot.

A similar process played out at another Goldman-owned property at 743 Warden Ave., although in that case the city settled at the OMB in part because it had already consented to convert that area to mixed use and the only disagreement was over creating a buffer of retail buildings between 184 new townhouses and the next-door industrial site.

“I’ve always been a huge advocate of protecting employment lands,” said City Councillor Michelle Holland, who represents Ward 35, home to 743 Warden and a good chunk of Scarborough’s manufacturing land. The councillor, who is the vice-chair of the economic development committee and also Mayor John Tory’s advocate for the innovation economy, said one change in the city’s employment lands is the slow disappearance of the kind of dirty or smelly manufacturing that helped create the rationale for strictly segregating these lands from residents.

“The type of manufacturing and companies that are moving into the ward are high tech,” Ms. Holland said. “They could set up shop next to a residential area. It’s a live, work and play environment: You want areas of growth, and to do that you need local employment so they aren’t having to travel long distances.”

Dr. Brail agrees, and said that, as the city works on its next update to the official plan, it needs to focus not just on the historic uses of commercial land, but build in some flexibility for an uncertain future.

“We’re currently in a period of unprecedented rapid change in the types of jobs we have in automation and retail,” Dr. Brail said. “You need to be thinking about how we transform employment lands that enables [Toronto] to transition into a 21st-century city.”