Simon Lewsen
Toronto
Special to The Globe and Mail
Published May 7, 2021 Updated May 11, 2021
For Subscribers
Comments
Text Size

The world is full of intractable problems. Homelessness isn’t one of them. The solution is as simple as solutions get: give homeless people homes. This has long been the position of housing-first activists, who see housing, like health care and safety, as a universal human right. (Arguably, the right to housing is simply an extension of those other rights. You can’t live healthfully or safely if you don’t have a home.) There’s also a hard-hearted, technocratic argument for ending homelessness: it’s cheaper – or at least no more expensive – than it is to cover the health-care and law-enforcement costs that chronic homelessness imposes. That’s why municipalities like Medicine Hat, Alta. and, until recently, Salt Lake City, Utah – nobody’s idea of socialist paradises – have been North American leaders in housing-first policy.

If the solution to homelessness is simple, the actual business of constructing cost-effective, high-quality dwellings is less so. How do you build well on a limited budget? How do you provide institutional supports, like social workers and addictions counsellors, in a setting that doesn’t become yet another shelter? And how do you move quickly to address an urgent problem in a timely manner? These are design questions, which is to say they’re questions for architects. In Canada, it’s common to think of residential architecture as a luxury commodity reserved only for that subset of the population with both money and taste. But this isn’t the case in Europe. And it shouldn’t be the case here.

In 2019, the Durham Region of Ontario – the eastern flank of the Greater Toronto Area, which includes the municipalities of Pickering, Ajax, Whitby and Oshawa – committed to creating 1,000 new affordable dwellings by 2024. To that end, the Cornerstone Community Association, an Oshawa non-profit, purchased a new building and added 21 units to an existing property, and the Parkview Seniors Lodge in Newcastle built 30 new homes, which will be made available for, at a maximum, 80 per cent of market rate.

The most ambitious undertaking, however, is a newly announced facility comprising 47 purpose-built residences on a greenfield site at Beaverton, Ont., a 3,000-person town near the mouth of the Beaver River. “My personal goal,” says Alan Robins, director of housing services in the Durham Region, “is to have the build completed by the winter of 2022, so that fewer people are forced to sleep on the streets.”

To that end, construction will have to proceed quickly. The Municipality of Brock, which includes Beaverton, recently put a temporary delay on the project, invoking an interim zoning bylaw – a move critics see as a capitulation to NIMBY pressures. The measure expires in November, and Mr. Robins hopes to get shovels in the ground shortly thereafter. “I’m committed to making this happen,” he says.

To design the facility, the Durham Region commissioned a major Toronto architecture firm: Montgomery Sisam, whose works include the Humber Bay Arch Bridge, an elegant pedestrian span at the mouth of the Humber River; the Ronald McDonald House Toronto, with its cozy libraries and verdant courtyards; and the Bob Rumball Centre of Excellence for the Deaf, a suite of airy, winter-white cottages near the shores of Lake Simcoe. (This seems to like an appropriate time to acknowledge that I have an obvious bias here. My favourite Montgomery Sisam house is the one I grew up in, a suburban post-and-beam with a salt-box roof. My parents commissioned it during the early 90s recession, when it was still possible for middle-class professionals to do such things. Montgomery Sisam is also currently renovating the Innis College building at the University of Toronto, where I teach classes on writing. I can’t escape these guys.)

To execute the Beaverton project on a tight budget and an even tighter timeline, principal architect Daniel Ling opted for a “modular” construction process. Each unit – a 66-by-14-foot rectangle large enough to house two studio apartments on opposite sides of a landing – will be prefabricated in a workshop, then trucked to the site and crane-lifted into place. The dimensions of the modules will be tailored to the size of a standard flatbed.

This approach is efficient for the same reason that Henry Ford’s Model Ts were cheaper to produce than the novelty automobiles that preceded them. “The workshop is set up like an assembly line,” says Mr. Ling. “There’s a section where the materials come in, a section where the walls come together, and a section where the cladding and finishes are installed. You don’t need scaffolding or a Zoom Boom. You don’t have fifty people on a construction site walking all over each other. And you’re indoors, which means you’re not trying to install roof shingles in the rain or snow. Each task is done repetitively, in a controlled environment.”

The effects on scheduling will be profound: The build will take an estimated eight to twelve months to complete, with a budget of $16-million to be covered by federal, provincial and regional funds. Residents will get private accommodation for between $400 and $500 a month, the current housing allotment under Ontario Works and the Ontario Disability Support Program. The facility will also have an annual operating budget of $1.2-million to pay for on-site counsellors, nurses and PSWs, depending on clients’ needs.

The design itself is elegantly restrained. It consists of two buildings, each clad in dark cedar that will recede into the woodsy landscape. The larger structure will comprise 39 modules stacked three high and 13 long. The second and third floors will have ensuite apartments, whereas the ground floor will have smaller individual bedrooms and shared amenities.

The residential structure will sit back, however, from an additional front-facing unit, comprising seven modules side-by-side. When arranged together, they will form a kitchen, a suite of private meeting spaces, and a combined dining room and fireside lounge beneath a double-height ceiling. Both buildings will have sloped rooflines made of prefabricated trusses, one of the few affectations within an otherwise streamlined design. “Modular architecture tends to favour simplicity,” says Mr. Ling. “You don’t have a lot of curves, angles or jogs. It’s like building with Lego blocks.”

In this respect, the Beaverton project resembles another recent MSA commission: a suite of 100 affordable units spread over two properties in Scarborough, Ont. Mr. Ling, who worked on the Scarborough projects, doesn’t deny the similarities with Beaverton. He argues, rather, that repetition is a valuable – perhaps even underrated – design principle. An architecture that rejects novelty can aspire instead to other virtues: efficiency, frugality and rationality.

Plus, to say that the Beaverton project resembles its sister sites in Scarborough is not to say that it’s an exact replication. The angular roofline gives the building a striking, prismatic quality, and the interiors have painted furniture and accent walls that references the natural surroundings – deep blues, greens and oranges, evoking milkweed or leaves in Autumn. “We wanted to blend into the Lake Simcoe area,” says Mr. Ling, “so we studied the landscape.”

The best feature of the design, though, isn’t the double height spaces, the accents or the windows that draw in natural light. It is, rather, the units themselves. They may be small and simple – 300 square feet of space, containing a bed, a closet and basic kitchen amenities – but they derive their value from their status as a home: a private sanctum, that can be sealed off from the rest of the world.

The problems with the shelter system – the noise, the dirt and the violence – are by now well known. Shelters were dangerous even before COVID-19. A night in a shelter can, at times, be better than one in the great outdoors, at least when the weather is harsh and there isn’t a deadly virus circulating. But a shelter can never be a home, because it doesn’t offer silence, solitude or stability – human needs every bit as essential as warmth and protection from the elements.

My adult siblings and I regularly return to stay in the Montgomery Sisam house we grew up in, even though we all have apartments of our own. We’re an overworked, over-anxious bunch, and the old house is one of the few places on Earth where we can reliably get a decent night’s sleep. Even when we’re not there, we know that we could be there – that our lives have a kind of stable centre, to which we can always return.

In an ideal world, everybody would feel similarly secure. I asked Mr. Robins, the director of housing services at Durham, whether he envisions the Beaverton facility as a temporary waystation for people seeking to rebuild their lives or as a base where clients might settle permanently. The answer, he responded, is both. “It all comes down to choices,” he said. “Some residents will transition to market housing. Some will make Beaverton their home for the long haul.” 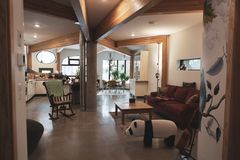 Thoughtful design makes the most out of this Toronto condo’s tricky layout
Subscriber content
February 21, 2020 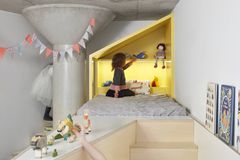