Note to readers: In August, this space featured an Uno Prii apartment tower in the running for a 2015 Heritage Toronto William Greer Architectural Conservation and Craftsmanship Award. In September, it was the Little Trinity Annex. Today, a third candidate is featured. Winners will be announced on Oct. 13 at the Heritage Toronto Awards gala.

A black hole sucks away everything – light, energy, warmth – until nothing remains.

In architecture, an abandoned building performs in much the same way. And, like the ripples from a stone tossed into a pond, repercussions can be large or small based on the size of the black hole building: an empty house, and perhaps a half-block feels it; a 75,000-square-foot school, and a whole community hurts. 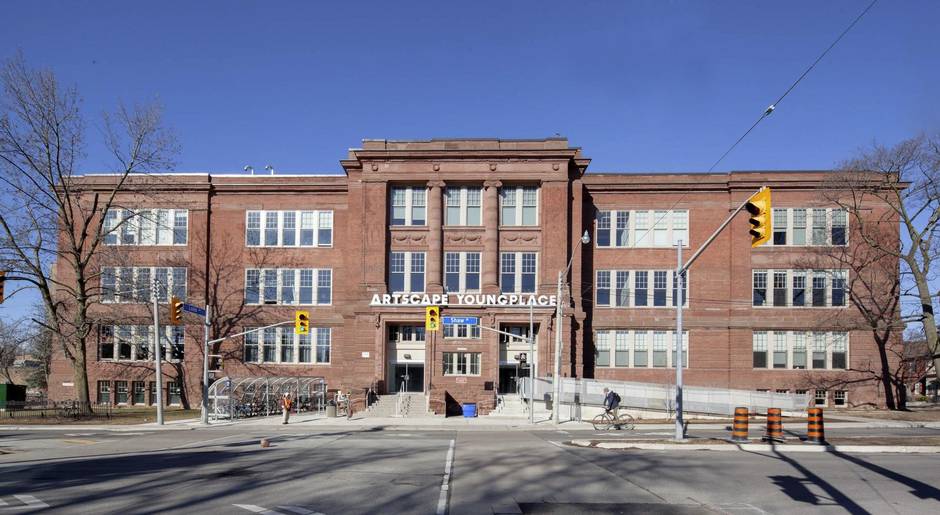 The century old school, deemed surplus by TDSB, has been rehabilitated and repurposed into Artscape Youngplace. (Scott Nosworthy)

Such was the case in 2000, when the Toronto District School Board declared the former Shaw Street School – a handsome, three-storey, cruciform-shaped structure built in 1914 – as “surplus.” Residents on Argyle, Givins, Rebecca, Bruce and Halton streets felt the thrumming void daily.

Luckily, a pulse remained, says Artscape president Celia Smith, as neighbours fought “so strongly” to keep the 1957 addition at the rear of the site in operation, since, “as some of them would say: ‘The heart closes in a community when you close a school like this.’”

Local resident and architect Chris Radigan and Teeple Architects, his employer, performed the necessary surgery: by removing the bricks-and-mortar umbilical cord between the two buildings, the Givins/Shaw Junior School could continue to enjoy the echo of little footsteps and gleeful shouts against its walls while the old building could be sealed up and given a siphon containing just enough heat to survive. 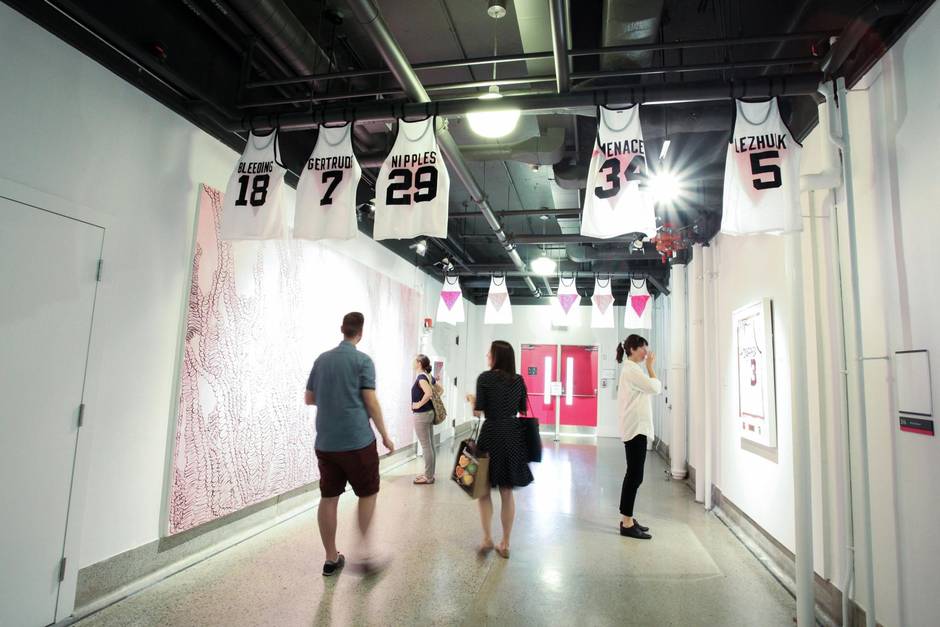 Inside Artscape Youngplace. Pictured: Intestinal Anarchy!! by Hazel Meyer, part of the exhibition All About the Hustle. (Garrison McArthur Photographers)

“So really tragic,” Ms. Smith says. “A 100-year-old, beautiful sandstone building like this closed in the middle of a really vibrant neighbourhood, which, over the course of that time, was getting more little kids again.”

By 2006, residents had had enough, and that’s when Ms. Smith’s organization was approached: Could this building be transformed into an arts-focused, community hub? Could it be a place that once again welcomed young people? And, if so, could it be as successful as Artscape’s other projects, such as the Wychwood Barns or the Distillery District studios?

In retrospect, the answer to those questions has been a resounding yes, but the road to Artscape Youngplace was, predictably, full of twists and turns.

After intensive study and a community consultation period, a generous lead gift from the Michael Young Family Foundation enabled Artscape to purchase the building from Toronto Lands Corp. in 2010. 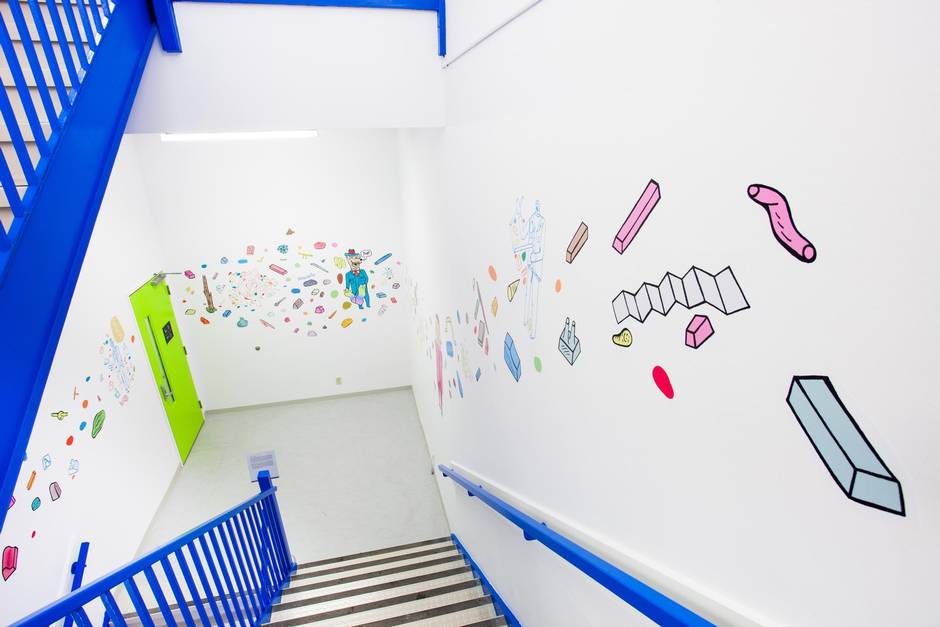 While it was only listed as a heritage property (and not designated), the team, which now included architect Ida Seto of heritage specialists Goldsmith Borgal & Co., wanted to “keep as many of the elements of the old school as possible,” Ms. Smith says. Of course, this had to be balanced, on the interior at least, with the need for modern niceties, such as air-conditioning with individual suite control (the old school didn’t have it), new electrical wiring and more plentiful plumbing.

On the exterior, sandstone was crumbling, wooden windows were failing, and water penetration had caused steel columns between the windows to corrode and weaken. “At one point, a couple of years before we got involved,” Mr. Radigan says, “some cornice stone fell off, so the [school] board had it all wrapped up in safety nets.” 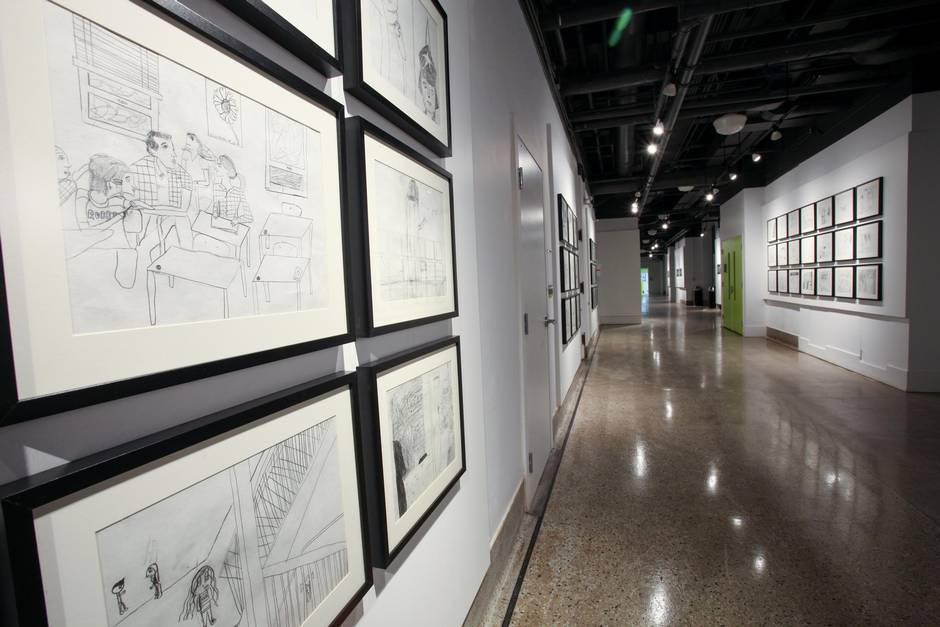 Pictured: artworks by students from the Givins/Shaw Junior Public School made with artist Dave Dyment, part of the exhibition Unarchive. (Garrison McArthur Photographers)

Also, a good part of the more intricate, decorative stonework had long since shed its craggy coil, but, since the budget was tight, the team prioritized which decorative bits to replace as, ultimately, safety was the biggest concern.

Today, eagle-eyed architourists will notice sturdy new sills and stone headers in many places, some “Dutchman” repairs here and there, new wood windows everywhere, repointed patches of brick, and, in some areas, entire sections of sandstone meticulously reproduced, such as the cornice at the building’s west gable, where only one small piece was salvageable.

But because not every missing tooth in the dentil moulding could be replaced, nor could every battered sandstone column receive a new skim-coat, Artscape Youngplace comes off as a heritage building of character rather than a clinical reproduction of one. 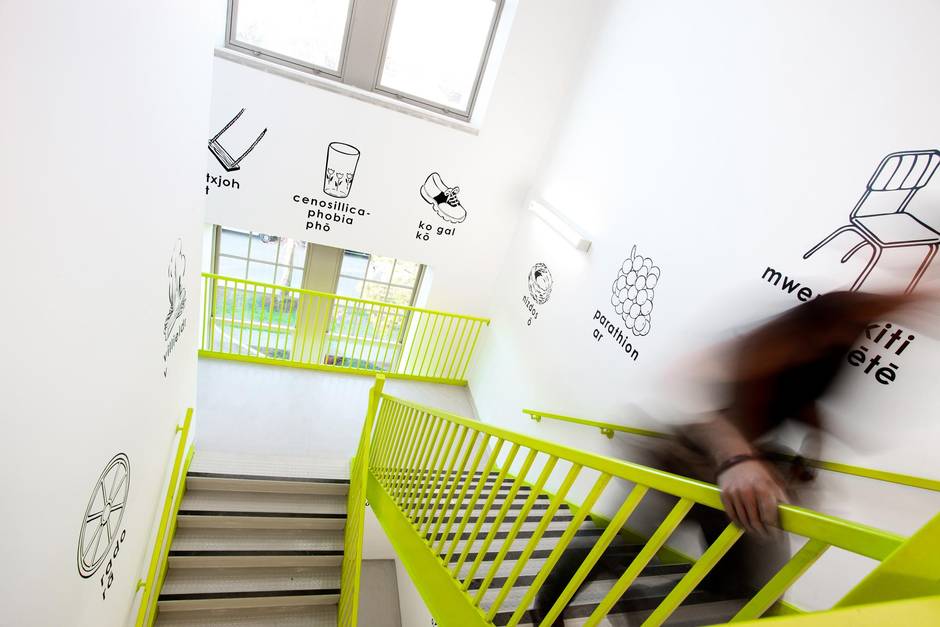 Step inside, however, for an eyeful of sexy and new: While terrazzo floors in the extra-wide (and original) foyers and hallways still show cracks, first-time visitors won’t notice thanks to the whimsical and edgy design work of WilliamsCraig Inc. In the “Urban Living Lounge,” neon squiggles compete with serpentine wooden furniture for attention, while heritage-heads will immediately gravitate to the cluster of original classroom clocks and metal door plaques (which read “Exit No 6,” “Matron” and “Athletic Storage”) arranged in artful fashion.

If the eye grows tired, it’s a short walk to the gorgeous on-site coffee pubs for a restorative cappuccino.

And one never grows tired of seeing the variety of tenants who have called the building home since it opened in November, 2013: individual artist’s studios; art collectives; 3-D print shops; a dance troupe; musicians; the Luminato offices; a yoga studio; and the Koffler Gallery, to name but a few. Throughout, original, brass-hinged doorways with large transom windows have been retained, and, overhead, lighting fixtures are repurposed originals. Inside some of the studios, original slate blackboards remain. 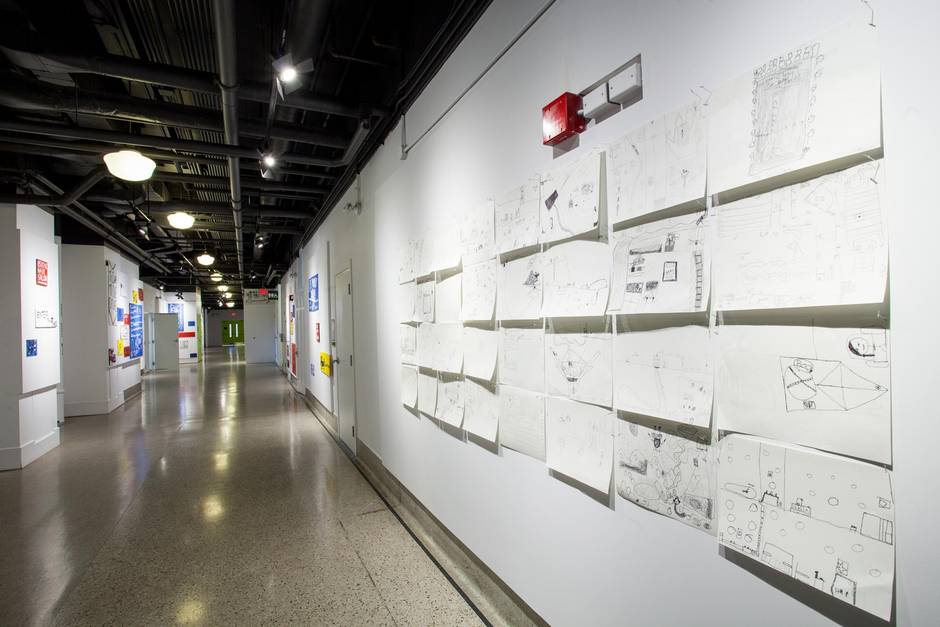 This is, once again, a place pulsating with life: music spills out of windows, children’s laughter echoes off walls, bright white hallways are ever-changing art galleries, and folks stop to chat on the front steps.

In short, a black hole has been filled with the light of creativity. And artists – once chased out of this neighbourhood because of skyrocketing rents – are the new beating heart of this community.