There is a buzz at the first Canadian conference of the Asian Real Estate Association of America happening here in Vancouver.

Chinese-American agents from Chicago, Kelowna-based realtors with Chinese buyers looking for vineyards and even a lone cowboy agent from Boise, Idaho, who have gathered here for a few days of seminars and contact-making are all talking about it: the much-touted "luxury-home tour."

There is some last-minute drama from disappointed would-be tour-goers who could not secure a seat on either of the two buses taking realtors to four homes that range upwards from $9-million. And at the 11th hour, a Globe and Mail contributor is informed that "media have been banned" from entering the first house on the tour. That would be the $22.8-million, four-storey home in Upper Shaughnessy that, at a cursory glance, reveals at least 10 pages of Google entries showing every nook and cranny of the cyborg Tudor mansion that appears half pastiche-traditionalist/half state-of-the-art smart house – at least to judge from its glossy brochure.

But my seatmate, a charming Chinese-American agent from the United States, returns from the "media-free" tour of the would-be Vancouver Gatsby's abode underwhelmed. "This is not a house for the Chinese buyer," she says. "It's not contemporary enough. There's too much dark wood panelling and old-fashioned interiors."

While the 1980s wave of Hong Kong buyers, raised on British colonial tradition, might have gone for this kind of Tudor fantasia, not so for the current Asian investor. According to a recent article published in Vancouver's Chinese-language newspaper Ming Pao, the main group that is feeding this year's 70-per-cent jump in sales of homes over $4-million in Greater Vancouver (according to the latest Sotheby's Realty report) are second-generation Chinese, or immigrants who have already established themselves here.

Since the federal investor program that allowed immigration with an $800,000-plus investment ended in 2010, the new buying class is market-savvy, with a taste for contemporary design. And they – say industry experts – are the main reason the luxury-home market in Vancouver is recovering much faster than the overall housing market.

According to Greg Lowe, the organizer of the tour and a real-estate marketer at Luxuryhomes.com, the key to attracting Asian buyers lies in the design of the building. Based on the traditional courtyard house model, Chinese families prefer to have several bedrooms all on one level, rather than on different levels, and each bedroom with its own bathroom.

"It's the antithesis of the traditional boomer design," he says, as the bus leaves Vancouver's West Side and heads to the North Shore, "with the master bedroom on the top floor, the living room on the main and the children's bedrooms in the basement." He mentions some friends who are having trouble downsizing from just such a house in West Vancouver, a popular area for Asian buyers because of its larger lots – due to its design.

While many newly arrived Chinese immigrants might well be able to afford luxury homes, the amount of money they can take out of the country is limited by the Chinese government. So those who have been here for at least three or four years, and increasingly their children, are the ones driving the luxury-home market revival.

Mr. Lowe says Vancouver is one of five North American cities – the others being New York, San Francisco, Toronto and Miami – where Chinese buyers are purchasing luxury homes. "It's partly climate-driven," he contends, noting their penchant for cooler climes that "aren't too hot in the summer." There's very little interest, for example, in Texas. "Cosmopolitan centres with existing Asian populations are also key," he notes. Per capita, Vancouver is right up there with New York in terms of buying volume.

Richard Bell, an immigration lawyer speaking at the conference, says that Vancouver, with its easy access to the Pacific Rim, also benefits from Canada being "more hospitable to foreign ownership than in the U.S., where visitors' visas are harder to come by," and is increasingly seen as a safe haven for families, with good options for education.

But when it comes to buying luxury homes, the devil is in the details.

"I could never sell this house to a Chinese buyer," says Sharon Lum, a second-generation Chinese Canadian (who grew up speaking Cantonese, but perfected her Mandarin as a realtor), as we walk through the next house on our itinerary. At first glance, the Mathers Avenue "mansion" with neo-classical pillars and grand entranceway seems more "Russian oligarch" than "new Asian buyer."

The tour has bypassed a more modernist, open-concept house in Sentinel Hill, listed at $13.9-million – that at 7,000 square feet on a 15,000-square-foot lot would have seemed a shoo-in for Lum's Asian clientele – due to some last-minute "security concerns."

In the new, 8,500-square-foot West Bay mansion – listed at $8.9-million – the lot is too small and on a steep incline, Ms. Lum says. But more concerning is the new kitchen island. "Asian buyers want a well-ventilated wok kitchen," she asserts, "one that is off to the side. Otherwise the smell and the grease get over everything." There are several bedrooms upstairs, "but look," she says, "there are no locks on the doors" (another no-no, she suggests, for multigenerational families sharing space).

Next stop is a house in the vintage WASP enclave of Old Caulfeild, traditional West Vancouver cottage country from the pre-Lions Gate Bridge days when arrival involved a small ferry. Here we are greeted by an Iranian-Canadian developer who has dropped the price from $11.5-million to $10.2-million and seems eager to find a buyer for the Arts and Crafts-style, yet state-of-the-art smart house, perched right on the waterfront.

He has had some interest from Hong Kong buyers, he relates, but not from any mainland Chinese. "It's too close to the water for them," suggests Ms. Lum. "They say that can wash away your money."

Over wine and cheese, a charming young realtor reveals himself as a living, breathing example of the Ming Pao-cited demographic. Twenty-two-year-old Tim Wang, who settled with his family seven years ago in Victoria from Xi'an, home of China's first emperor and the Terracotta Warriors, now works for second-generation Chinese Canadian Tony Joe. The boy from Xi'an chats with the Tehran-born developer about the nuances of selling a faux Arts and Crafts, $10-million home to Chinese buyers in the heart of Old Caulfeild.

For a moment we are all caught in a strange New World crucible. We gaze out at the landlocked peninsula that is Vancouver, on the gleaming summer horizon. 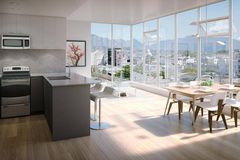