Sonja Bata holds the little booklet gently. "Look at the presentation," she says. "Isn't it beautiful?"

She examines the photograph of wildflowers on the cover: "Even to choose this as the cover, to give a character to the type of house, because it was a country house, it wasn't a town house … it's light, it's airy, it's for a young family." As she turns its 50-year-old pages containing tiny floor plans, colour schemes on vellum overlays and fabric swatches, memories come flooding back.

But they aren't tinged with nostalgia: She's standing in the foyer of that very house, on a hill overlooking the village that bears her name, Batawa, just minutes north of Trenton, Ont. In fact, so little has changed since Toronto architect John Cresswell Parkin handed the keys to "Shoemaker to the World" Thomas Bata in 1960, Ms. Bata speaks more of Mr. Parkin's presentation booklet as a functional piece of art.

Just like this 3,600-square-foot, one-storey modernist masterpiece. Sure, it's a time warp; its crisp architectural lines and original Knoll and Herman Miller furniture certainly make it seem as if a Julius Shulman photograph of a California "case study house" has sprung to life. But if something works, why change it? Would it be okay to draw a few faces into the blank spaces on a Mondrian if portraits became the current trend in painting?

While Ms. Bata suggests that her six-member family didn't use the home nearly as often as their Toronto residence, or that it "stood still" because of her and her husband's constant globetrotting, it's clear her respect for good design also played a part.

The Swiss-born Ms. Bata studied to be an architect. "And then I got married to a shoe man," she laughs, flashing her trademark smile while sitting comfortably on a Hans J. Wegner sofa. So it was only natural that when she moved to Toronto as a newlywed in 1946, she should befriend the brightest and best in the architectural community. One friend, Raymond Moriyama, would eventually design the Bata Shoe Museum at Bloor and St. George streets; the other, Mr. Parkin, would design Bata's famed Don Mills headquarters and this Batawa country house.

Former Globe and Mail architecture writer Adele Freedman penned that "there were only two offices to consider" when it came to postwar design in Canada, John B. Parkin Associates under John C.'s design leadership and Page and Steele under Peter Dickinson. Because both men achieved success quickly and moved on to larger commissions, neither left many private house designs in their wake. This makes Ms. Bata's house all the more important to the history of Canadian residential modernism.

After graduating from the University of Manitoba, Mr. Parkin (he was not related to John B.) studied under Bauhaus founder Walter Gropius at Harvard University, and it was his love of those clean Teutonic lines that inform the L-shaped home. While known by his peers as a "purist" and perhaps even a control freak (in his own home on the Bridle Path he allowed only two plants: split-leaf philodendrons and rubber plants), Ms. Bata's strong will is felt here as well. Rather than the usual signature flat roof, she convinced the architect to pen a soaring pyramidal roof over the main living areas. It's anchored to the ground outside by four steel columns so that there is no evidence of support inside; the illusion of floating is enhanced further by placing clerestories all the way around.

Walls and exquisite shelving units designed by Toronto-based Leif Jacobsen stop short of the wood-clad ceiling to allow light to pass through. Doorways have the top quarter hinged to allow for light and cross-breezes: "There is no air conditioning in this house, but it's never hot to sleep here," she says.

There aren't windows in the traditional sense, only fully transparent walls or fully opaque ones. Peppered, dove-grey brick usually slips past the glazed walls to blur the boundaries of indoors and out.

In the master bathroom, the vanity floats in front of its window-wall while a figure by Swiss sculptor Hermann Haller dances in a sunbeam. Even the smaller children's bedrooms and nanny suite seem much larger because of their connection to the outdoors.

The only room that rejects sunlight is the "winter living room," a slate-floored, sunken nook off the main living area with a commanding fireplace sporting a wide, black hood and a terrazzo hearth that stretches past Mr. Jacobsen's shelves to connect to the foyer.

In the dining room, Ms. Bata removed the undercarriage and legs from a rosewood sideboard and had it anchored to the wall above the floor; she then repurposed the undercarriage as a bench below a massive 1958 Aubusson tapestry of galloping horses. "Don't sit on it because it's not solid, it never was," she advises with a laugh.

A picture of that very bench and tapestry made the cover of Ontario Homes & Living magazine in January, 1964. Reporter Al Kurtz wrote that Mr. Parkin's design "is particularly significant at a time when much of our attention is directed to a revival of traditional themes."

Forty-five years later, Ms. Bata worries that the current preference for traditional styles may quash her dream of a neo-modernist, fully sustainable 1,000-home development she'd like to build in Batawa (currently 110 households). Although approvals and a plan are already in place, this charming and persuasive lady is nevertheless finding it difficult convincing others to embrace the modernist forms she has loved all her life.

While currently focused on that new housing plan, Ms. Bata does hint that one day her own 1960 home may play a role in promoting the charms and carefree lifestyle modern design provides: "If the whole Batawa becomes a legacy of good design … then it might become worthwhile to have a heritage place where you show good architecture," she says.

Before that day comes, perhaps a well-designed booklet like the one handed to her a half-century ago will do the trick. 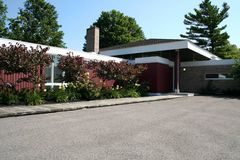 Follow Dave LeBlanc on Twitter @gmarchitourist
Report an error
Due to technical reasons, we have temporarily removed commenting from our articles. We hope to have this fixed soon. Thank you for your patience. If you are looking to give feedback on our new site, please send it along to feedback@globeandmail.com. If you want to write a letter to the editor, please forward to letters@globeandmail.com.
Comments