A reader named Darrell wrote to say he is moving to Toronto from San Francisco. He'd like to invest in real estate in this city and he's looking for suggestions on finding a neighbourhood that may be lagging in value now, but has the potential to become sought-after.

"I am looking for a house or condo in an area that today may be undervalued, but will shortly be an up-and-coming area," writes Darrell.

"I am willing to take a little risk in a neighbourhood if it will develop over time," he adds.

Darrell doesn't provide a lot of additional information, except to say that his time horizon for appreciation is three to five years.

He has talked to a few real estate agents, but they all seem to be pushing the areas where they have inventory, he laments. Others are pointing him towards neighbourhoods that he already deems too hot.

First, it has to be noted that Darrell's question presupposes that Toronto's housing market will continue its upward trajectory for another three or more years. Lots of people are warning against taking such an optimistic view.

David Madani, Canada economist for Capital Economics, expects Canada's existing home sales to flop late this year and next. Mr. Madani points to such bubble symptoms as overbuilding, over-valuation, high household debt and government-backed mortgage insurance as evidence for his worrying view that the market could be in for a correction of 25 per cent or more.

Economists at the big banks also caution that a recent jump in activity in Vancouver and Toronto may be the result of sales pulled forward as buyers rush to take advantage of low interest rates on their preapproved mortgages.

Still, there are plenty of builders and real estate agents who dismiss the doomsayers. Brad Lamb, who both sells and develops real estate, moderated a fairly sanguine panel of industry players at a real estate round table convened by Queen's University last week.

"Condominiums: How long can their explosive growth continue?" was the question. "Forever," quipped Mr. Lamb, who believes that the economists are not paying enough heed to the need for increasing density in downtown Toronto.

Mr. Lamb says that most Canadians would prefer to live in a house, but in the downtown areas of large cities, detached houses with a yard are no longer affordable. He adds that Toronto is surrounded by a greenbelt that limits building in the suburbs.

And despite the polarizing views of the market, Darrell has another reason to buy: He'll need a place to live when he moves north.

Some areas of Toronto have undoubtedly lagged others in price appreciation. Darrell points to new transit lines and relocating businesses as two catalysts for growth.

With that in mind, he might consider Eglinton West. The area near Eglinton Avenue and the Eglinton West subway station has plenty of small houses where Portuguese and Italian immigrants raised their families on tree-lined streets before a new wave began to arrive from South American countries. Lots of young couples are also drawn to this neighbourhood for the parks and schools. The neighbourhood will be further transformed by the Eglinton-Scarborough Crosstown light rail transit project, which is expected to boost the area's popularity for businesses and commuters.

Real estate mavens often point to Long Branch, in the southwest corner of Etobicoke, as an area poised to take off. Developers are building townhouses and condominiums on Lake Shore Boulevard West, while move-up buyers are tearing down some of the smaller bungalows on the side streets and replacing them with large, new houses. The shopping strip is still a bit gritty in places, but lots of new cafes and a few large retailers have moved in.

To the east, the area known as Little India is undergoing a notable change as the area near Gerrard Street East and Coxwell Avenue attracts young, first-time buyers who have been priced out of uber-trendy Leslieville. The vibrant community now offers a mix of traditional sari shops and hip new boutiques. Loft houses, modern townhouses and condo units are being added to the housing mix.

On the Bloor subway line, Darrell might look at Bloordale before all of the artists, galleries and vintage shops leave for hipper destinations. The semi-detached houses and new lofts are appealing to buyers who can't afford the Annex or Seaton Village to the east.

I hope Darrell will let us know what he thinks of Toronto real estate values compared with the rarified atmosphere of San Francisco.

Meanwhile, send your suggestions for overlooked pockets to cireland@globeandmail.com 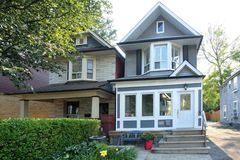