In 2008, Lance Olson, 57, and Wendy Wright, 63, were building a traditional stick frame duplex in Calgary. Mr. Olson had acquired some free insulation, which he laid under the slab in one unit; he didn’t have enough for both sides so left the other unit without insulation. Some time later he was dropping off flooring at the home and placed his hand on the slab of the unit with the insulation.

“It was warm; I was quite amazed,” he says. He went next door and placed his hand on the slab without insulation to find that “it was freezing cold.”

Mr. Olson’s accidental experiment piqued his curiosity about energy efficiency and sustainable building theory. “The difference was incredible and that’s when I realized there’s a better way to build houses,” he says, “so I started researching.”

Mr. Olson has worked in the theatre industry for the past 35 year and Ms. Wright teaches ballet. Sustainable building practice was an entirely new field of interest for the couple; the culmination of which was a dream to build a sustainable, net-zero home with the potential to be entirely off-grid.

It’s a dream which came to fruition this spring as work commenced on Pelican Perch, a cottage on Buffalo Lake in central Alberta overlooking a pelican reserve, which will eventually become the couple’s retirement home. 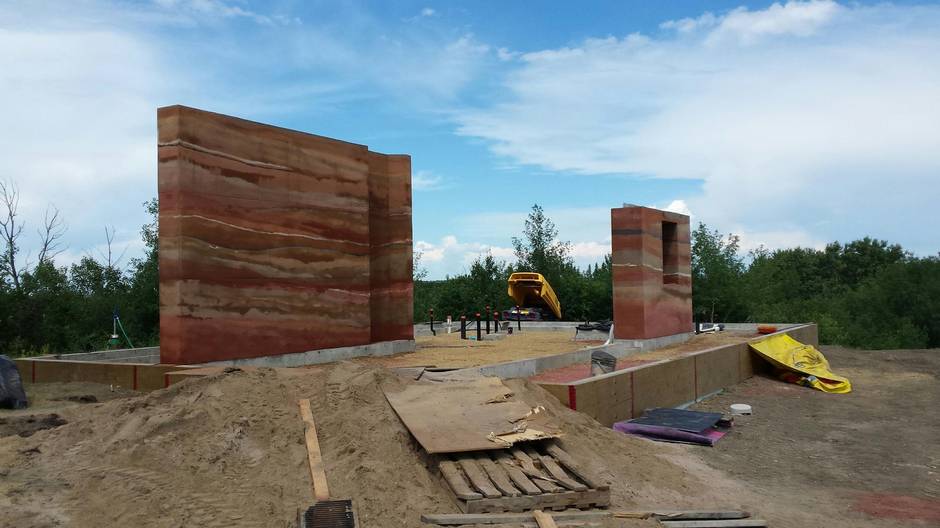 Homeowners Lance Olson and Wendy Wright are building their cottage, Pelican Perch, along with the Southern Alberta Institute of Technology to be a model for green building. Two complete rammed earth walls, made by compressing dirt, stand ready. (SAIT GBT)

The 850-square-feet house is a post and beam construction with solar panels, straw bale insulation, rammed earth walls, a metal roof and a wood burning stove. The construction is now complete and the couple hope to have the interior finished in early 2017.

But what makes Pelican Perch truly remarkable is that it’s an official research field site for the Southern Alberta Institute of Technology (SAIT) with the potential to have a long-term impact on the future of sustainable building practices in Canada and around the world.

“Lance originally came to us to have his math checked on the house he’d designed,” says Rebecca Davidson, project lead and researcher in SAIT's Green Building Technologies team. “He was also interested in using his project to help educate others on straw bale construction. The more we discussed his vision the more we realized the huge potential there was in working together.”

The team at SAIT then set about “matchmaking” their “very willing guinea pigs” with product designers, experts and educators eager to have the opportunity to monitor sustainable technologies and building practices over time, in a uniquely Canadian climate.

“The performance of straw bale construction and insulation isn’t something we have a lot of information on,” says Ms. Davidson. “Pelican Perch will allow us to chart insulation values, moisture build-up, how heat is transitioning and the differences which occur depending on which way the straw in the bales runs.” 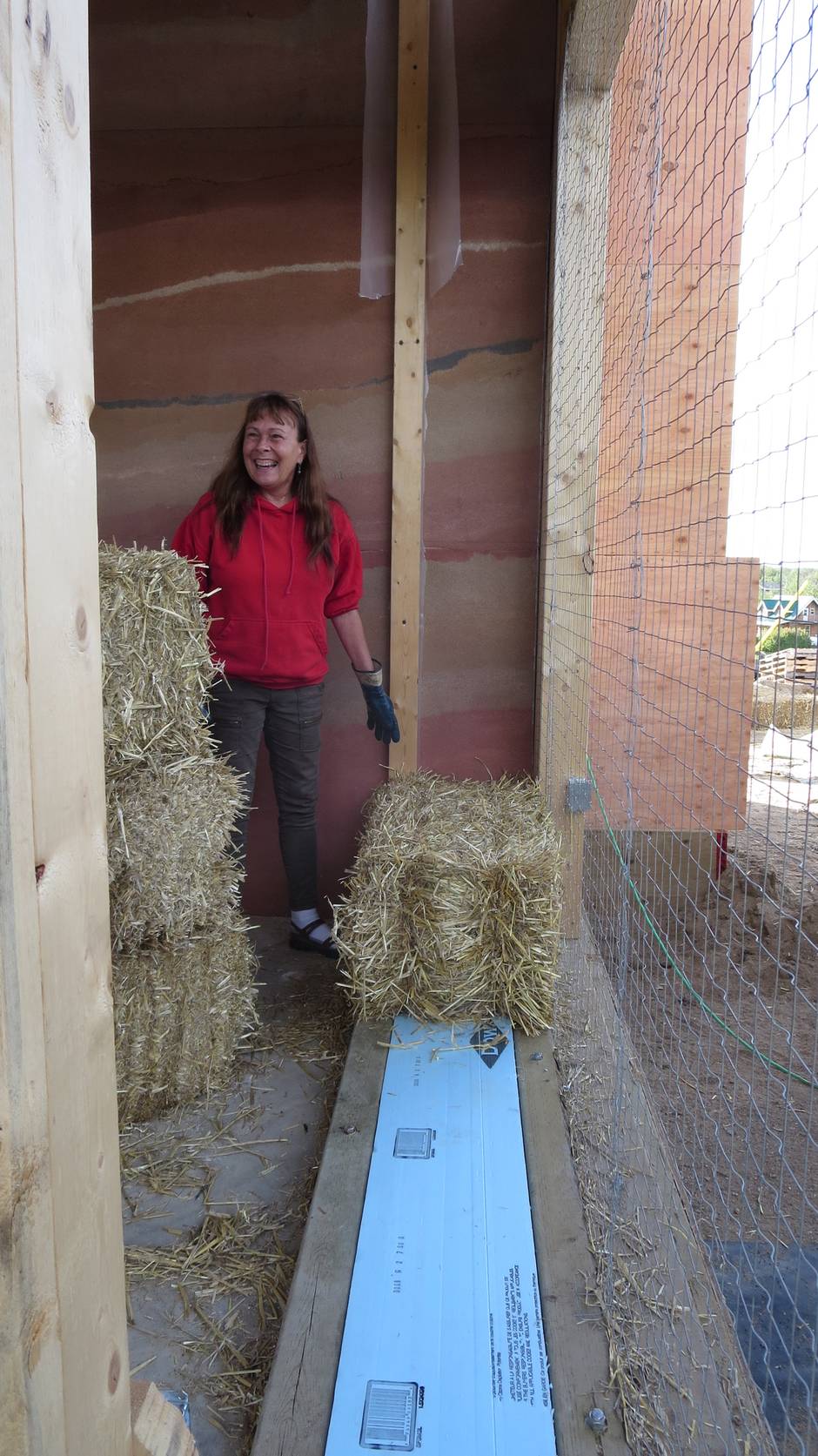 Leading the build was straw bale research expert, Habib Gonzalez of Edmonton-based Sustainable Works. Mr. Gonzalez has constructed more than 100 straw bale houses in Canada and around the world. The build was undertaken over several weekends as a hands-on workshop in straw bale construction.

“We had about 60 volunteers help with the build over three weekends. From people who are interested in building their own straw bale house to architects, engineers and green technology students,” explains Ms. Davidson.

“Dennis has built two incredible rammed earth walls in Lance’s house,” she says. “This is an ancient method of building with compacted earthen materials. The effect is really stunning, it’s like a work of art, the walls absorb heat from the sun in the daytime and emit it into the home during the night.” 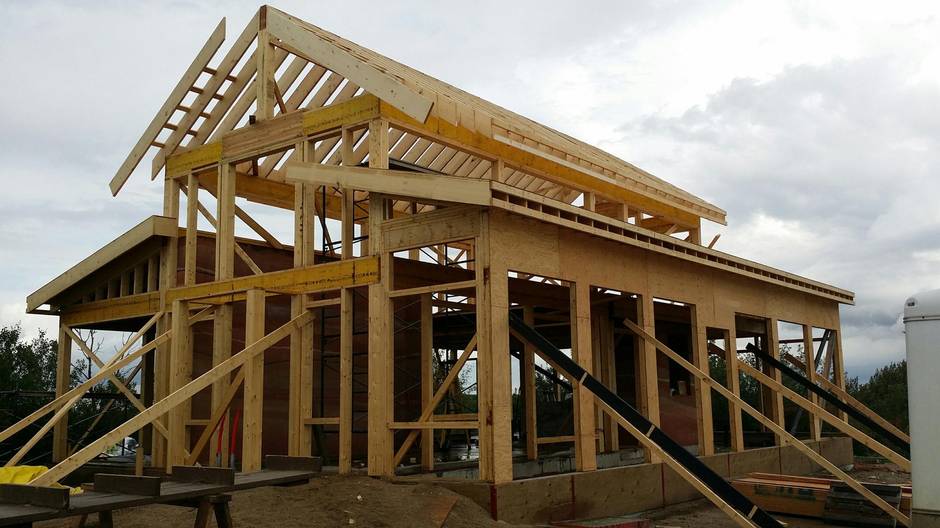 Pelican Perch, a cottage on Buffalo Lake in central Alberta overlooking a pelican reserve, being built by Lance Olson and Wendy Wright as their retirement home. (SAIT GBT)

“In the south facing wall, we’ve installed an insulated core consisting of hydronic loops four inches beneath the surface which will wick away heat absorbed by the sun and pump it back to the boiler to heat water,” she says.

“It’s something Dennis has never done before and we’re not sure how it will work but it’ll be exciting to see,” she adds. “We always make sure there’s a back up system in place when installing untested forms of sustainable technology.”

Data from Pelican Perch will be recorded on five sensors within the property. Initially, Mr. Olson will be responsible for manually entering the data, but in future, with wired Internet access, data could be pulled automatically.

“It’s extremely important that this house informs the industry and the next generation of sustainable builders and educators,” explains Mr. Olson. “Who knows, a couple of tweaks here and there could make a big difference.” 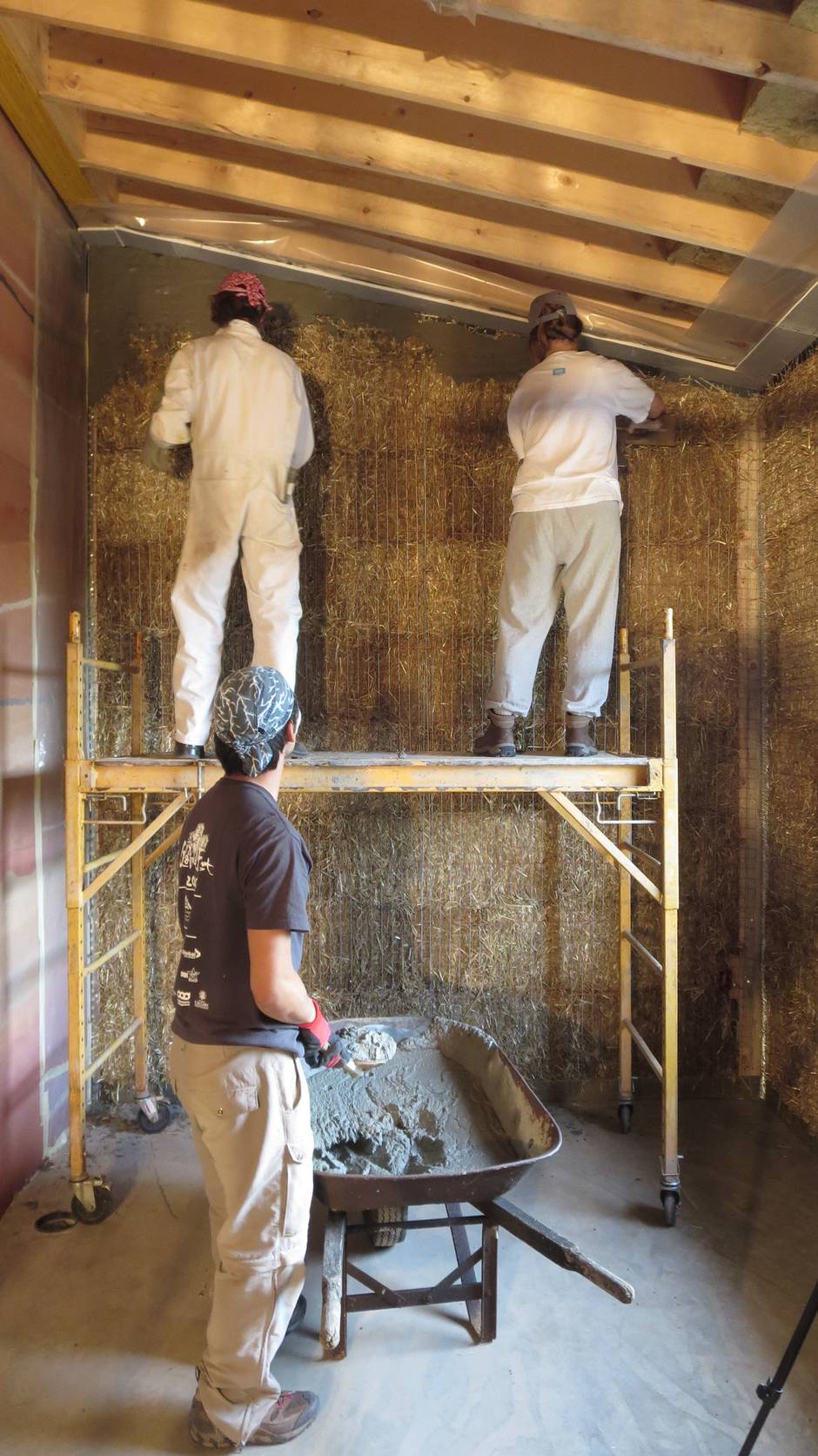 The research will eventually be made public and used to advance sustainable home construction in Canada and around the world. SAIT has already applied to present Pelican Perch at sustainable building conferences in Alberta and as far afield as Spain.

Mr. Olson says the total cost to build the home will be between $280,000 and $300,000 “not including land or sweat equity.” He estimates the green building methods and technologies have added 25 per cent to the cost over a traditional build.

Ms. Davidson says the project has attracted a huge amount of interest from homeowners as well as those within the industry. “I couldn’t even tell you how many tours we’ve done of the home so far,” she says, “countless.”

But she admits the biggest barrier to turning interest into action is cost.

“Homeowners are interested in green and sustainable but research shows they’re typically not willing to pay more than 10 per cent more for it,” she says. “They are willing to pay more for comfort though, that’s what people can relate to; drafty windows, cold spots, that sort of thing. By developing green technologies that address comfort concerns, we hope we can increase engagement with a wider number of homeowners.”