When Urs Ribary and his family moved into their Anmore home, they knew it came with a tower and power lines that ran across the wooded back of the property.

BC Hydro wants to add another tower and a 230-kilovolt transmission line through the Ribary family's one-acre property. The new tower would be positioned a mere 20 metres from the family's back door.

Professor Ribary is a pioneer and world expert in brain imaging who has lived in the Lower Mainland for 10 years. The Swiss-born doctor came to Vancouver after 20 years at the New York University Medical Center. He is the B.C. Leadership Chair In Childhood Health and Development, and he teaches at the University of B.C. and Simon Fraser University. And he is fearful of the electromagnetic fields (EMF) around power lines, and the unknown effects they may have on his family's health.

"It's unbelievable. This is crazy. A huge emission, it's dangerous – it kills people, it makes us sick," says Dr. Ribary. "Around people's homes, you don't build 24 lines. If this goes through, these will probably be the highest density power lines in the Vancouver area.

"And secondly, we worry if you have this 40 metre [high] tower 20 metres in front of the house, in earthquake country, if it falls, that concerns me. My wife Evelyne wants to move out."

The tiny village of Anmore has a population of about 2,000 people and sits on Indian Arm, just north of Port Moody. Anybody who's gone swimming at Buntzen Lake will know the rural charms of Anmore. Because of its large properties and abundance of nature, it's also seen steep property increases in the past five years. Lots such as Mr. Ribary's are worth between $2.5-million and $3-million.

But BC Hydro purchased a right-of-way through the Anmore properties in 1961, for $1. The property owner at the time, a logger named Joseph Bedard, signed the agreement to grant the B.C. Electric Company, as it was known then, the right of way and easement in perpetuity.

But residents say they've tolerated above-ground power lines running through their community long enough. They want the existing ones buried, and they want the proposed new ones buried, too.

The Crown corporation is arguing that the 66-metre-wide right-of-way entitles it to build new towers as part of the Metro North Transmission Project. The corporation has said that the growing region will need about 40 per cent extra load over the next two decades. BC Hydro had studied three options, but chose "Alternative 2" last fall, which means an overhead line out of Coquitlam substation, through Anmore and Port Moody, across Burrard Inlet, and underground into Burnaby and Vancouver.

"We will be undergrounding the new line through Burnaby and Vancouver because BC Hydro does not have overhead right-of-way in that part of the area where the line is being built," spokeswoman Mora Scott said in an e-mail.

The project will start in 2019 and take two years. But first, BC Hydro has to get approval from the BC Utilities Commission. Since 2013, they've held two open houses with the Anmore community.

The two sides are in loggerheads, unable to find a compromise. In response, the people of Anmore have got more than 300 signatures on an online petition.

BC Hydro says the transmission lines are well within the 2,000 milligauss threshold set by the World Health Organization and Health Canada.

However, Dr. Ribary argues in the petition that "single pulses of 2,000 mG applied to the human brain for just a few seconds activates local brain areas – a technique called TMS or Trans-Magnetic Stimulation."

Long-term stimulation at that amount for a few minutes a day can change the human brain's cognitive network, and a permanent stimulation "will probably be deadly," says the petition.

The Health Canada website says that EMFs are strongest when close to the source, such as underneath a power line. It says that burying the power line can block electric fields. As for the health effects of EMFs, "the vast majority of research to date does not support a link" to human cancers, says Health Canada. The International Agency for Research on Cancer, has, however, classified extremely low frequency magnetic fields as "possibly carcinogenic." It says there is "limited evidence" that magnetic fields could pose a risk factor for childhood leukemia. The Canadian Cancer Society website says: "…there does appear to be a higher risk of childhood leukemia when EMF exposure is higher than levels normally found in the environment."

Dr. Ribary says residents on his street have suffered suspicious illnesses. A child living adjacent to the power lines died of leukemia. Two adults were diagnosed with cancer, and others have had health issues. Of course, there is no proof that the power lines were responsible, but the suspicion among residents is there.

That suspicion alone could also have an adverse affect from a financial perspective, which, all residents agree, is far less important to them. The petition cites 30-per-cent property value losses, which would affect 140 Anmore properties, or up to $100-million in financial losses. About 550 to 700 residents live in proximity of the power lines, according to the petition.

Dr. Ribary wasn't planning on selling prior to BC Hydro's plan. But in the future, if he did want to sell, the power lines could be a turnoff to potential buyers.

"Would you buy a house with a [tower] 20 metres away? And we already have one pole in our property. When we bought it, we were told about the line. … But at least in an earthquake, that one would fall between houses, so we would be kind of safe. But with this other one 20 metres away, and 12 additional lines, it's very unsafe."

BC Hydro recently said it would reduce EMF levels after proposing a plan for sub stations underneath two Vancouver parks and a school. BC Hydro chief executive officer Jessica McDonald wrote a letter to Mayor Gregor Robertson and Vancouver school and park boards that said the transmission cables would be buried deeper than usual to "alleviate the public perception of health risks of EMF." The letter also said the cables would be encased in steel to further reduce those levels.

That plan fell through, but those words stuck with Anmore residents.

"The bottom line for me is health concerns and the total unfairness of it all," says Anmore resident Lynn Burton. "If BC Hydro was going to look at putting their relay stations underground because they were concerned about the health of people in downtown Vancouver, why are they not concerned about us here in Anmore?

"It's not so much about the real estate, because who really cares except for people who own the property? The concerning issue is the potential risk to our health, and the children's health."

BC Hydro had looked at putting the lines under the local streets instead of backyards, but estimated the cost to be around $35-million, says Ms. Scott. The overhead alternative is only $9-million.

"We are not pursuing this option because we have a responsibility to our ratepayers to keep rates as low as possible," she writes. "It would be difficult to justify this additional cost of going underground when there is sufficient space in the existing right-of-way for an overhead line.

"This is an important consideration as the project will need approval from the BC Utilities Commission."

She also says that the terrain is too rocky, and would require blasting.

Dr. Ribary isn't buying the arguments. He says the towers will need significant foundations, which will require digging. Also, he believes the BC Hydro estimate is high, and they could easily afford to foot the bill.

"It's always too much money. The cost translates into their net profit in around 10 days."

Councillor Paul Weverink says the village council supports the residents, but it's a "David and Goliath" battle. Council won't mount a legal battle against the Crown corporation, but they are going to remain publicly opposed.

"The village wouldn't take on Hydro. It would just break us," he says.

Mr. Weverink says a new set of towers would affect the entire community, in terms of general health concerns, the fact they're a public eyesore, and financial impact for property owners.

"You add more [power lines] it will erode the property value. And the more lines you get in general, the more the community would be affected. That's the concern for everybody. Our community's position is, 'How big do we have to be until our voices are heard?'" 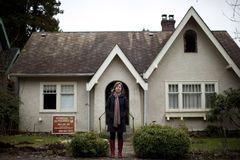 Big profit on flipped town house in Port Coquitlam
March 10, 2017
Follow Kerry Gold on Twitter @goldiein604
Report an error Editorial code of conduct
Due to technical reasons, we have temporarily removed commenting from our articles. We hope to have this fixed soon. Thank you for your patience. If you are looking to give feedback on our new site, please send it along to feedback@globeandmail.com. If you want to write a letter to the editor, please forward to letters@globeandmail.com.
Comments