Architect Darren Polanski, a senior associate at Sturgess Architecture in Calgary, knew he had found the right vacant lot for his own home when he came across a piece of land that no one else wanted. The site had potential – a corner in the city’s leafy Highwood area, on the cusp of downtown. The slightly awkward shape – a wedge that came to a point near the street front, and much wider towards the rear lane, where it sloped down hill – made other buyers balk. “It is quirky,” Mr. Polanski says. “But I like constraints, much more than I’d like a giant blank slate. Constraints can really push an interesting design.”

Mr. Polanski used the tilting, pinch-cornered topography to his advantage. At the lowest, lane-side part of the site, he built a garage with a 750-square-foot rental unit above – one of the first such laneway houses to get a permit after Calgary started piloting backyard dwellings in 2014. At the top of the site, he built his own 1,600-square-foot home, which rises high enough over the garage that the second-level, including the master-suite and office, has clear, unimpeded south views.

From the street, it’s hard to tell so much building sits on the property. The home looks unobtrusive at first glance, tucked well within the confines of the seemingly skinny property. But it subtly, comfortably fans out as the lot widens at the rear, like a slice of piece sitting nicely on a pie plate.

There’s enough room that between the main house and the laneway suite, a tiered deck overlooks a sunken courtyard. When Mr. Polanski throws parties, as he is want to do on a warm summer evening, a DJ sometimes spins outside. “It’s so nice to see people chat on the various levels,” he says. “It all feels very nice, very lively.”

Critically, though, those parties never bother Mr. Polanski’s tenant. In fact, there are no views between the garage flat and the larger home. All the windows in the secondary suite face either the lane or the nearby, adjacent road. It’s backside, facing the courtyard, is a blank, window-less, sound-damped wall. “I literally never know when my tenant is home,” Mr. Polanski says. “And she never knows when I am home. I think we both prefer it much better that way.”

Blank walls can be bland to gaze upon. It’s not an issue for Mr. Polanski. He’s rendered the wall in white stucco, a soft, unfussy material material he doesn’t mind seeing from his ground floor, open-concept kitchen and living area. He’s also dotted the courtyard with a row of poplar trees and an outdoor gas fire place to add to the interest.

Simple, yes. That’s the point. Previous to settling full-time in Calgary, Mr. Polanski lived in Norway, where he developed a deep appreciation for the Scandinavian love of less is more. “I’m a minimalist,” he says, noting that he prefers an abundance of light and air, with his big windows and 10-feet ceilings, to an abundance of stuff.

The penchant for spareness is evident throughout the home’s interiors. If a surface isn’t bright white, it’s grey. If it’s not grey, it’s darker grey. And if not that, then its a slightly shimmering galvanized aluminum (i.e. sparkly grey). Take the kitchen. It is essentially composed of gleaming ivory cabinets contrasting with large concrete-coloured floor tiles, each one 10 feet by 3 feet to reduce the number of visible seams. “The tiles weren’t easy to lay,” Mr. Polanski says. “Thankfully I had a really good tiler so it all settled well.”

In addition to restrained finishes, there’s no clutter. Anything superfluous has been weeded out. After Mr. Polanski moved in to his newly completed home a couple years ago, he had stacks and stacks of books. Books of all sorts with colourful spines. “Everything is digital now,” he says. “I do all my reading on my phone or my iPad.” Rather than letting the tomes collect a thick layer of dust on a bookshelf, he got rid for them.

As a contrast to the home’s cool tones, pops of wood add warmth. There’s a mid-century modern coffee table in the living area, near a sleek dining table with simple, flat benches. The master ensuite has a cedar-lined, honey-hued sauna – another nod to Scandinavia. And not everything is so ruthlessly straight-edged. There are even some antiques, such as a bedside table and a desk with a circular mirror in the bedroom. “I inherited some family furniture a few years ago,” Mr. Polanski says. “I live how more traditional furniture looks in a highly modern space.”

Perhaps the biggest restraint in the house is with its overall size. 1,600-square-feet (plus a basement) is far from tiny. However, it’s relatively modest for a Calgary, a city known for its big homes and big sprawl (Calgary’s population density, at about 1,300 people a square kilometre, is less than a third the density of either Toronto or Montreal, and less than a quarter of Vancouver). 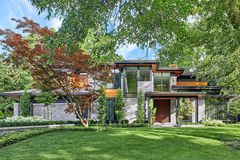 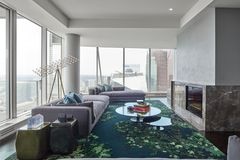 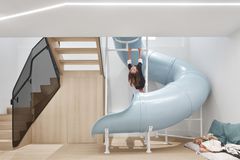