Jennifer Mahood and Mark Heard’s family home is one of the oldest in Calgary’s inner-city community of Ramsay. It was built in 1911; the same year City Hall was completed, a year before the first Calgary Stampede and more than 40 years before Ramsay was officially named Ramsay.

Around their house, Calgary’s skyline grew and, in recent years, Ramsay shrugged off its gritty reputation to become one of the most up-and-coming neighbourhoods in the city.

Which is why, when Ms. Mahood and Mr. Heard discovered the foundations of their home were rotting beneath them, they knew they had to find a way to secure its future there – along with their own.

“We bought the house in the summer of 2012,” the 41-year-old Mr. Heard says. “We’d been living in a condo in Mission and we were expecting our first child. We settled on Ramsay because we wanted to live inner-city and we could get more for our money there than other areas we looked like Sunalta and Crescent Heights.”

“We also loved the neighbourhood,” Ms. Mahood adds. “It has a really tight community and it’s one of the last remaining inner-city residential areas in Calgary that hasn’t seen a huge amount of development.”

Three years later, returning from a weekend away, the couple discovered a substantial amount of standing water in their basement, which led them to investigate.

“The basement was really just a crawl space for storage, but it had been renovated,” Ms. Mahood says. “When we removed the drywall, we found that the foundations were rotting.” 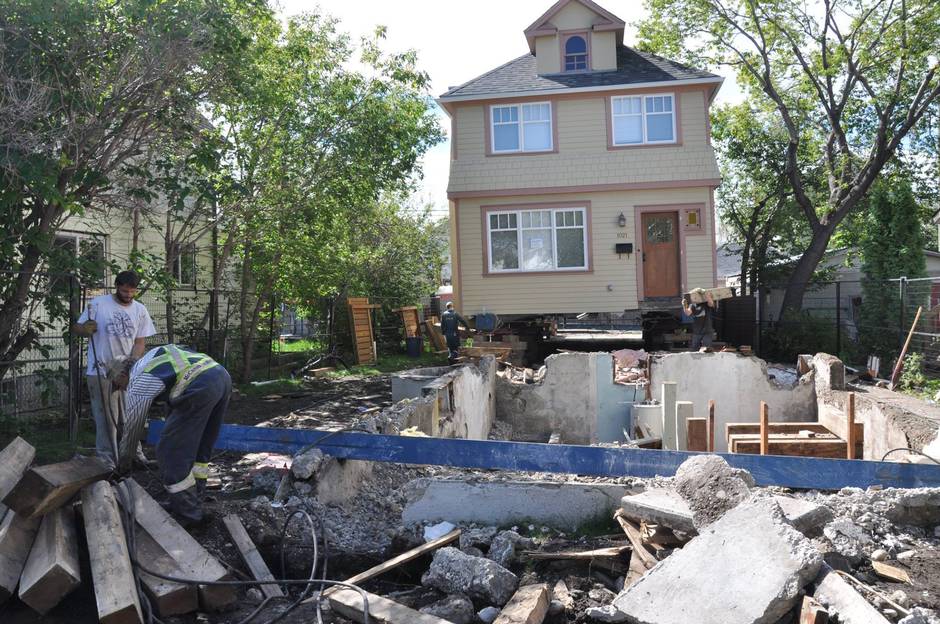 Jennifer Mahood and Mark Heard’s house in the Calgary neighbourhood of Ramsay was raised off its crumbling foundations and moved. (Dependable renovations)

After exploring their options with a variety of contractors, the couple faced a choice.

“We could sell and lose a lot of money, we could try and patch it up with an interior weeping system, we could demolish and start again or we could keep the house and completely replace the foundations,” Mr. Heard says.

“Selling wasn’t an option. We paid $565,000 for the house and in its present state we’d be looking at getting $400,000-$450,000 for it. The interior weeping system was affordable, but we felt it wasn’t really a solution and rebuilding the property was out of our budget. It also wasn’t something we wanted to do anyway. From the ground up, the house is sound; it’s the roots that were the problem.”

The couple spoke with an engineering firm, which told them if they wanted to save the house they’d have to lift it up and repour the foundations – which is the proposal they took to Lisa and Barry Johnson of Dependable Renovations.

Together, with the help of architect Dwayne Seal, they formulated a plan to move the family home onto the garage pad, after dismantling the garage, to allow them to excavate and replace the rotting foundation.

“We’ve never done anything like this before,” says Ms. Johnson, who’s has been renovating and building in Calgary for more than 20 years. “So it’s been an exciting project to work on and really satisfying to know we’re saving a home like this.”

“I’ve moved houses before and laid new foundations for them but never this old,” Mr. Seal adds. “Usually when there’s structural issues with a house that’s 105 years old, the house just isn’t salvageable. That was my initial thought when Lisa told me about the project. But then we went to see the house and I’m like, ‘Okay, we’ve got to keep this house.’” 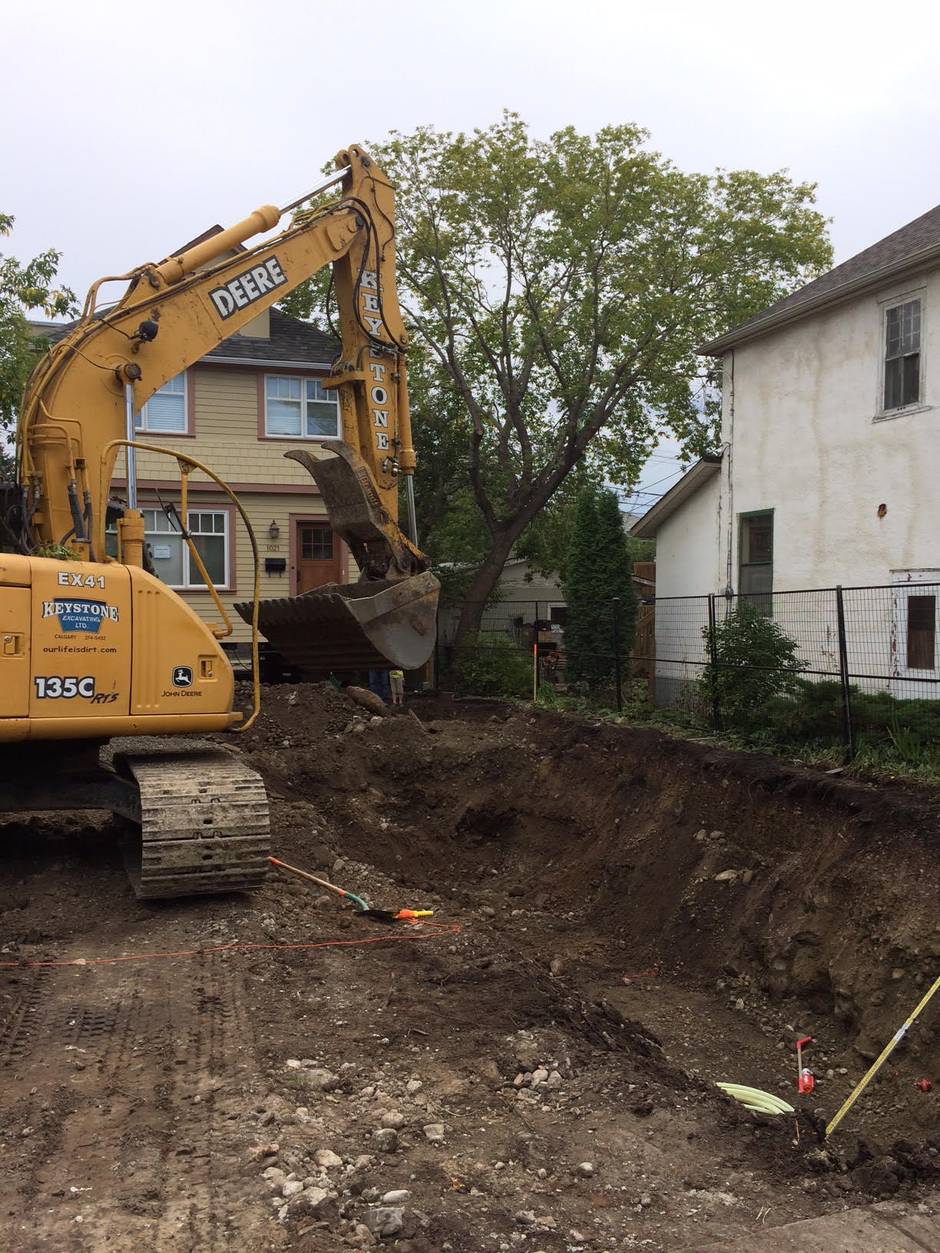 “Architecture isn’t just about building new,” he adds. “It’s also about preserving what we have. Sometimes people forget that.”

Ms. Johnson agrees. “When we moved the house, we had a barbecue on the street so that the community could come out and ask questions. What we’re doing has been so well received by everybody. Homes like this are the heart and soul of communities like Ramsay,” she says.

Mr. Heard, Ms. Mahood and their two children have since moved into a friend’s empty property in Strathcona, where they’ll stay until their house is back on solid ground.

In the meantime, the house has been moved onto the garage pad and the rotting foundation excavated and repoured. In the coming weeks, the house will be repositioned, the basement completed and the ground floor fully renovated. The whole project is expected to take around six months.

“It would have been in the region of $700,000 to demolish and rebuild and the permits would have taken far longer to secure. The permits for this project took just five weeks to come through.”

Mr. Seal says owners of older properties also have to consider costs such as asbestos abatement.

“Because we only disturbed the ground floor on this project, asbestos wasn’t such a big issue. I’m working on another project right now, which is a demolition and rebuild and it’s costing the client $30,000 just to deal with the asbestos and do a full clean of the house and materials. This project might seem like a lot of disruption, but compared to demolishing a house of this age, it’s pretty straightforward.” 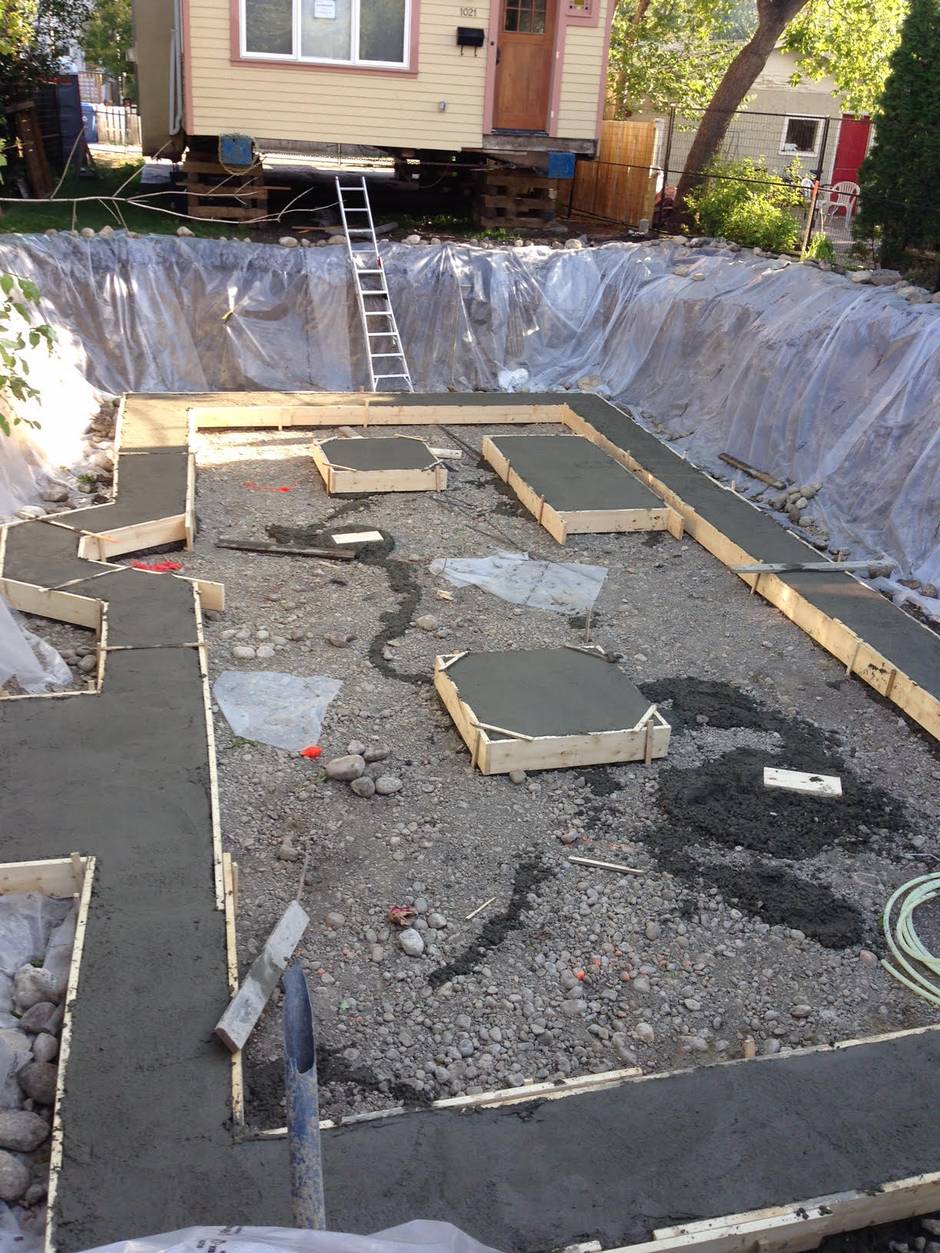 First forms for the new foundation are laid. (Dependable Renovations)

Mr. Seal says the property move will also provide an opportunity to reposition the home, bringing it in line with current city bylaws.

“The home was actually positioned in such a way that to use the side entrance, you had to cross the boundary line of the neighbouring property. There was a caveat in place to allow the owners to do this. It’s just a quirk of an older building,” he says. “The house was also positioned about six inches closer to the street than current bylaws allow. So we’re repositioning the house to address those two issues.”

Mr. Heard and Ms. Mahood considered the financial implications of their renovation carefully before deciding to go ahead.

“We’re lucky in that we had a little put aside because we have a growing family so we could afford to replace the foundations and renovate at the same time,” Mr. Heard says. “We expect the renovation will come in around $340,000, which includes a full basement with a fourth bedroom, office, laundry room and bathroom plus a new stairwell, and we’re having a new kitchen put in upstairs and the ground floor reconfigured. There’s also some patchwork to be done on the exterior due to the move.”

Mr. Heard is hopeful the renovation will increase the property’s value to around $750,000 but insists that has never been the driver for the renovation. 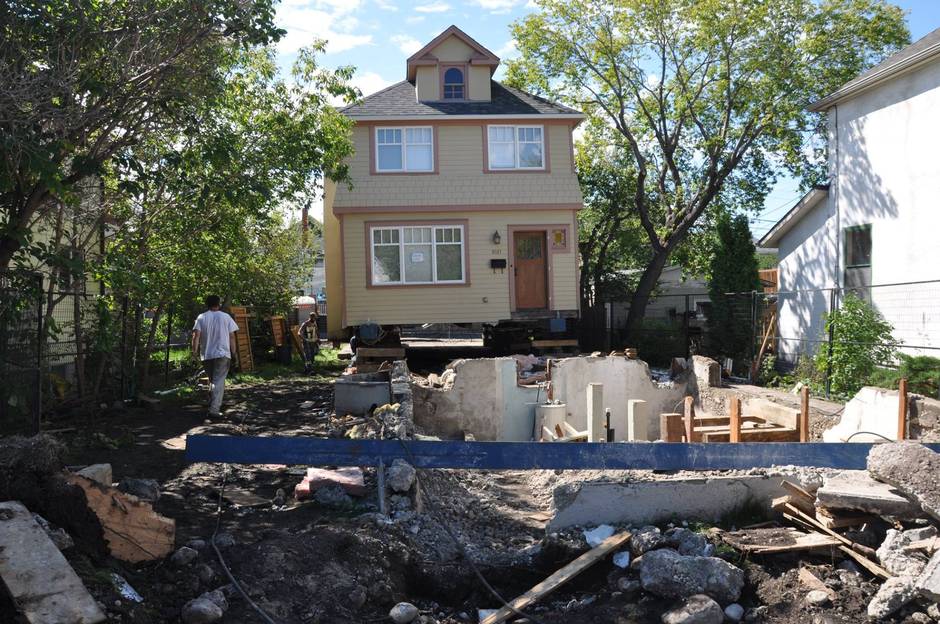 When the new foundations are finished, the house will be moved back on and reattached.

“We always planned to renovate at some point,” he says. “Maybe not quite like this, but it was on the cards.”

“We’re overrenovating for the house and the neighbourhood,” Ms. Mahood says. “But I don’t think in 20 years from now we’ll care. We’ll have a home we love and that we raised our kids in.”

“If we had to sell in three years, it’d be a different matter,” Mr. Heard adds. “But this is a long-term decision for our family.”