The last airplane to takeoff from Edmonton’s City Centre airport departed on Nov. 30, 2013. Later that afternoon, the final runway was closed for good, officially ending a contentious debate that pit the corporate community fighting to save it against politicians wishing to redevelop the 550 acres just north of downtown. Eventually, the pitch for turning the landmark into North America’s greenest community – 30,000 people living and working in a carbon-neutral neighbourhood – won over the public and opened a new chapter for the sprawling oil city to re-image itself as an environmental leader.

Years later, “Blatchford” – an homage to the site’s historic name, when aviation pioneers solidified it as the Gateway to the North – is shovel-ready, but struggling to entice actual shovels. The original business case predicting half a billion dollars in revenue has been dismissed as administrators concede it will likely be a break-even project. And while some city councillors argue to reverse its net-zero plans, prominent voices in design are accusing Edmonton of diluting them, including the architects of the award-winning master plan, who’ve begun distancing themselves from Blatchford.

The site of the former City Centre airport. (City of Edmonton)

“This is a transformational agenda for the city,” says Gary Klassen, the general manager of the City of Edmonton’s development branch. “This isn’t just about Blatchford; it’s about the city changing the way we do business and moving the needle on [greenhouse gasses].”

On his recommendation, Edmonton’s 12 councillors and mayor recently voted unanimously to ground the project until next year, while administrators decide on an energy utility to serve the future inhabitants. The first residents were originally expected to move in as early as this year. Mr. Klassen says it’s important they don’t rush into it to avoid costly mistakes and that the city remain dedicated to its original concept. 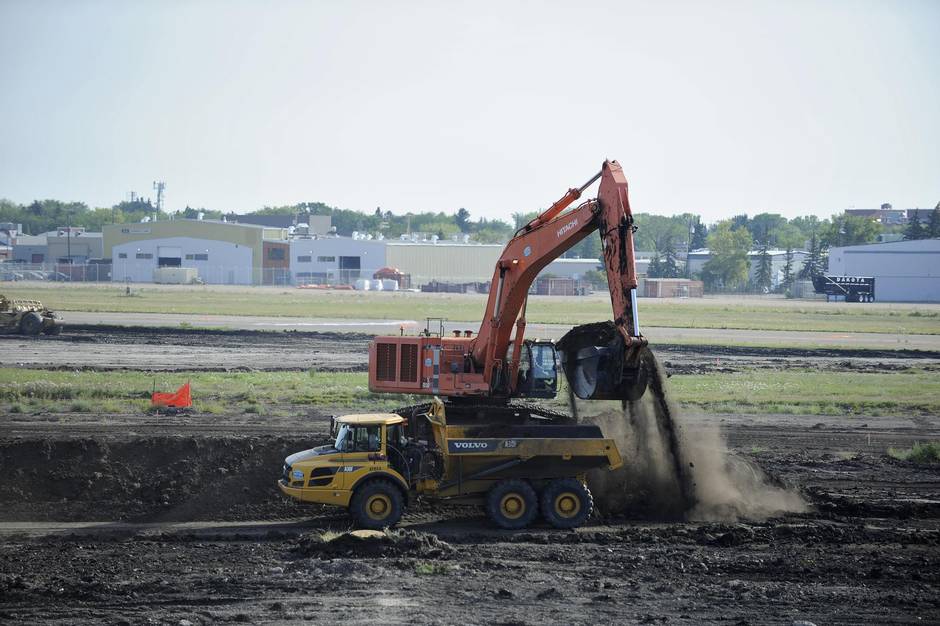 Edmonton held an international design competition for Blatchford in 2010, calling for a proposal that would honour its history and build a global model of sustainable living – what Masdar City is to Abu Dhabi or Vastra Hamnen is to Malmo, Sweden. The winning design by Perkins + Will promised a community built around light-rail transit, bikes and walking, and affordable multifamily homes powered by renewable energy. Stormwater lakes would conserve water and a pneumatic system would suck up and deliver trash to a biomass burning plant.

Since entering the detailing phase, several of these innovations have been cut or replaced. The principle architect Joyce Drohan has called the city’s process “extremely disrespectful” and the Royal Architectural Institute of Canada (RAIC) has penned an open letter protesting the “watering down” of sustainability objectives. 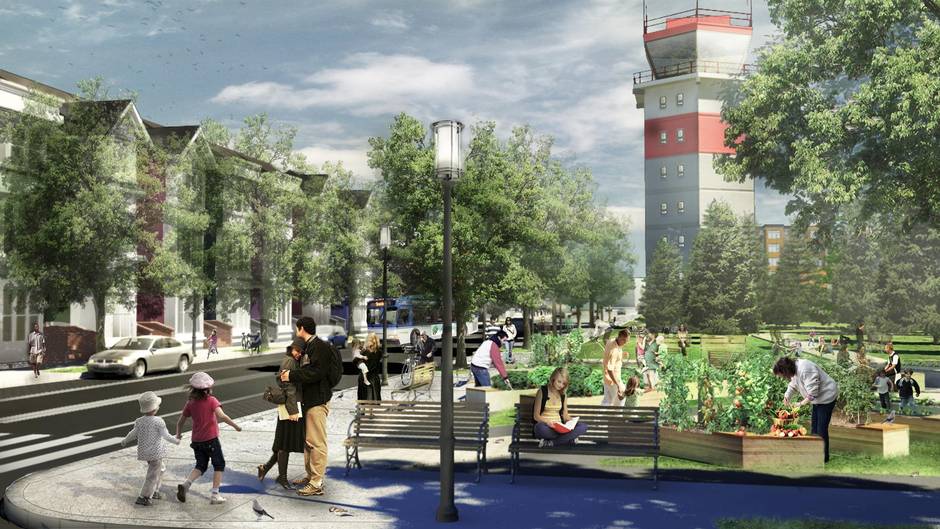 Architects are concerned that the initial plans for the neighbourhood are being watered down. (Rendering via City of Edmonton)

More concerning, says Samuel Oboh of the RAIC, the original fine-grained street network promoting walkability is gone. “Not only is this contrary to the city’s ambition for a highly walkable community,” he says, “but it also promotes a suburban development pattern of enormous blocks, benefiting developers but greatly compromising connectivity – a key tenet of the plan.”

“The local developers only know the sprawl business,” says Shafraaz Kaba, an architect with Manasc Isaac, a firm that specializes in sustainable design and has offices in Alberta and Romania. “We need to help our local developers to come along to this idea.”

Between 1971 and 2011, no Canadian city has physically expanded more than Edmonton. An extra 752 square kilometres have been urbanized, much of it paving over prime farmland. The day after council voted to stall Blatchford to save $100-million, a new report concluded that three new suburbs – long approved and under development – would lose $1.4-billion over the next 50 years. 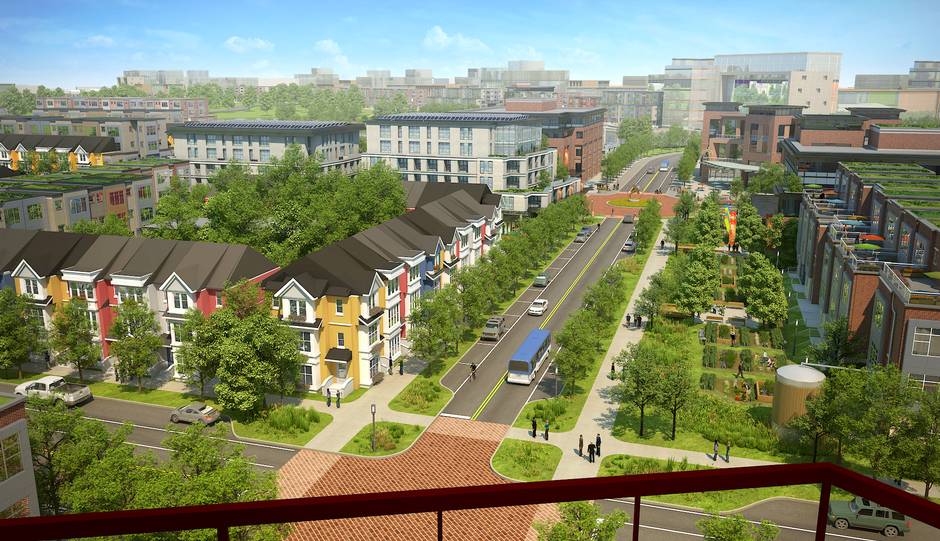 The initial design promised a community built around light-rail transit, bikes and walking. (Rendering via City of Edmonton)

Blatchford is supposed to prove Edmonton can develop sustainably. Currently the average Edmontonian emits 24 tonnes of carbon dioxide a year – four times a Vancouverite and just a little less than Houstonites, according to Perkins + Will. The carbon footprint of Blatchford residents will be just four tonnes annually.

“You want to call it a pilot?” Mr. Klassen asks rhetorically. “You want to call it soul searching for a city? This one is sorting out the nuts and bolts of what we need to do.” However, he and many city councillors insist on it being economically self-contained and not subsidized by Edmontonians as a whole.

“That’s exactly the kind of contrary thinking that will destroy the plan,” says Mr. Kaba, whose firm vied for the master plan in 2010. “If Edmonton was never willing to pay for that, council should never have approved the competition parameters in the first place.” 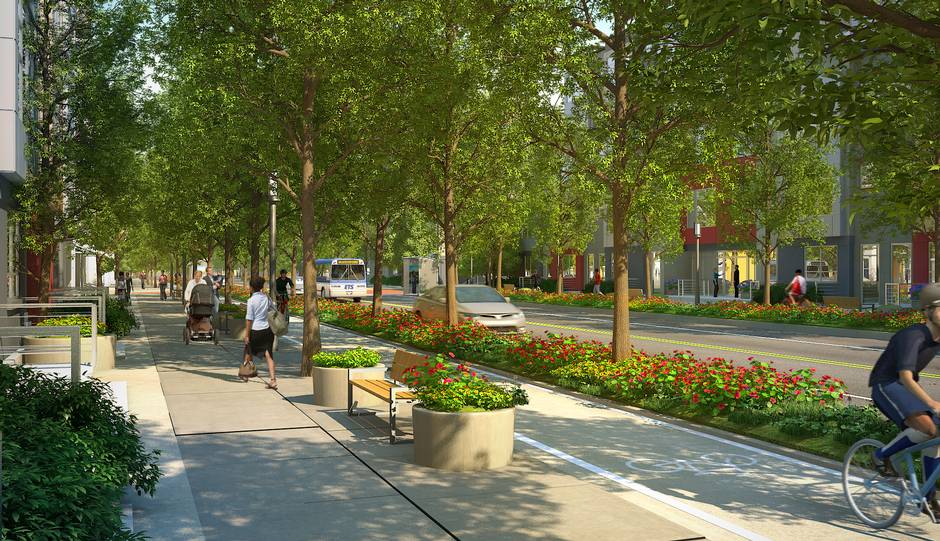 Blatchford is supposed to prove Edmonton can develop sustainably. (Rendering via City of Edmonton)

It was initially hoped that the first inhabitants, now estimated to arrive in late 2018, would open the doors to a carbon-neutral home on day one. Mr. Klassen now says it will take five to 10 years to achieve zero-emission infrastructure.

He admits this is new territory for Edmonton’s developers, many of whom told Blatchford’s advisory committee that they wouldn’t be involved with the project as it stands. A key cause of their hesitation is the district energy system using geothermal heat. Although the technology has been used around the world for a century, it’s never been implemented on this scale.

But some in the sustainable-development sector say the technology is too costly and too antiquated for the original goals. “There’s nothing wrong with geothermal, but the upfront cost is very high,” says Reza Nasseri, owner of Edmonton’s Landmark Homes, a pioneering builder of net-zero houses. “It needs clean electricity to run the pumps and requires regular maintenance, so the cost [increases]. What if they build this and price themselves out of the market? It will make no sense at all because you could build a net-zero house at a much lower cost.” 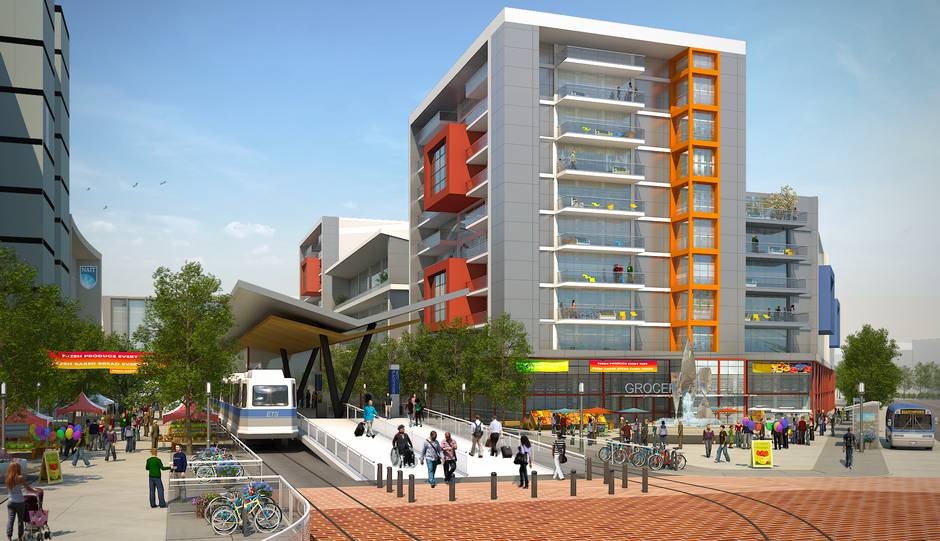 It was initially hoped that the first inhabitants, now estimated to arrive in late 2018, would open the doors to a carbon-neutral home on day one. (Rendering via City of Edmonton)

Landmark is one of the few companies that’s explicitly stated a desire to build in Blatchford and Mr. Nasseri himself sits on its advisory committee. “We are very interested as long as it’s a net-zero community,” he says. “If it’s not, we’re not really interested.” He advocated for rooftop solar and an off-site solar farm which he says would be more efficient and cheaper and could power buildings beyond Blatchford.

The one-year pause is intended to help administrators figure that out, but it is more clearly about political posturing. The City of Edmonton hopes to offset the local taxpayers’ burden with investments from provincial and federal governments, including the Liberals’ recently announced $5-billion fund for water, wastewater and green infrastructure. “Their investment will allow us to investigate what works,” says Bev Esslinger, the city councillor who’ll inherit the future community. “It’s a chance to demonstrate how we can be a sustainable community throughout Alberta and Canada.” 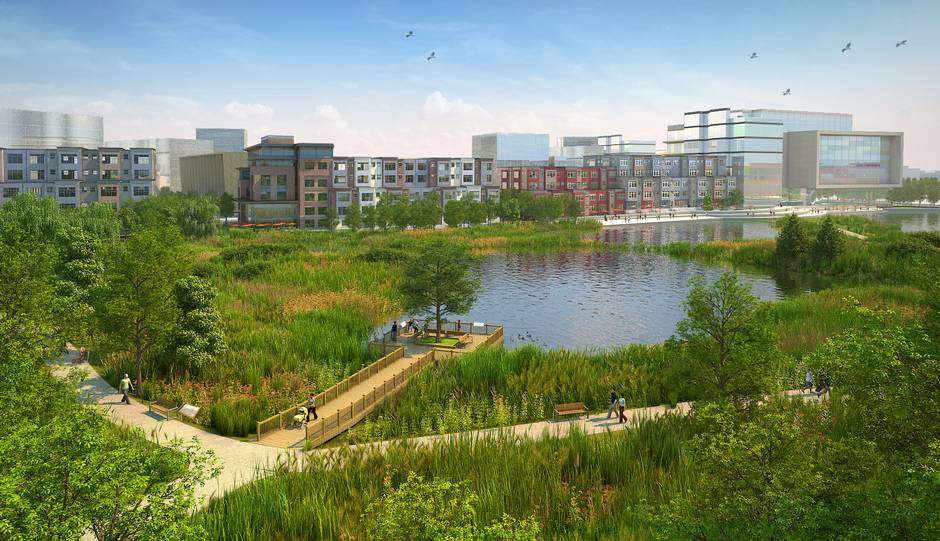 Stormwater lakes would conserve water and a pneumatic system would suck up and deliver trash to a biomass burning plant. (Rendering via City of Edmonton)

Councillor Michael Walters, supported the delay but fears some of his colleagues, administrators and even the general public are having second thoughts.

Following chronic delays on LRT and bridges, he says, residents have lost confidence in basic, and let alone ambitious, project management. As well, Albertans are rattled by economic woes and hesitant to take on such high-risk uncharteed territory. “And,” Mr. Walters says, “the closer you get to execution inherently people get more nervous.

“But we made this promise to close the tired airport and build something revolutionary.”