Virtual reality has been creating a buzz in the architecture and design world for a while now. The idea of being able to build, manipulate, share and explore a to-scale virtual creation makes a lot of sense. But it has one downfall: Virtual reality excludes reality and architecture has to ultimately work in the real world.

Enter mixed reality; a merger between real and virtual worlds similar to that which is currently taking the world by storm in the form of the popular mobile game Pokemon GO.

Harnessing it's potential for architecture is a piece of software called ICEreality which was recently launched by Calgary-based DIRTT Environmental Solutions, which uses proprietary 3D software to design, manufacture and install custom, prefabricated interiors.

“Virtual reality was important but mixed reality will be profound,” says the software’s inventor and DIRTT co-founder Barrie Loberg.

At the product launch this June in Chicago, Mr. Loberg presented mixed reality live on stage; it was a world first for the construction industry. The audience was able to watch Mr. Loberg build a virtual timber-frame structure in front of them, watching his mixed-reality view projected onto a screen. They could then download an app to their iPhones, key in their seat number in the auditorium and see the virtual wooden-framed construction on stage for themselves.

“This is not a canned experience,” Mr. Loberg said of the launch. “This is an experience in real time. Everybody sees the virtual construction from their own point of view. The people at the front see it from a different perspective to the people at the back. We can make changes to the virtual construction and hundreds of people can see and collaborate on those changes.” 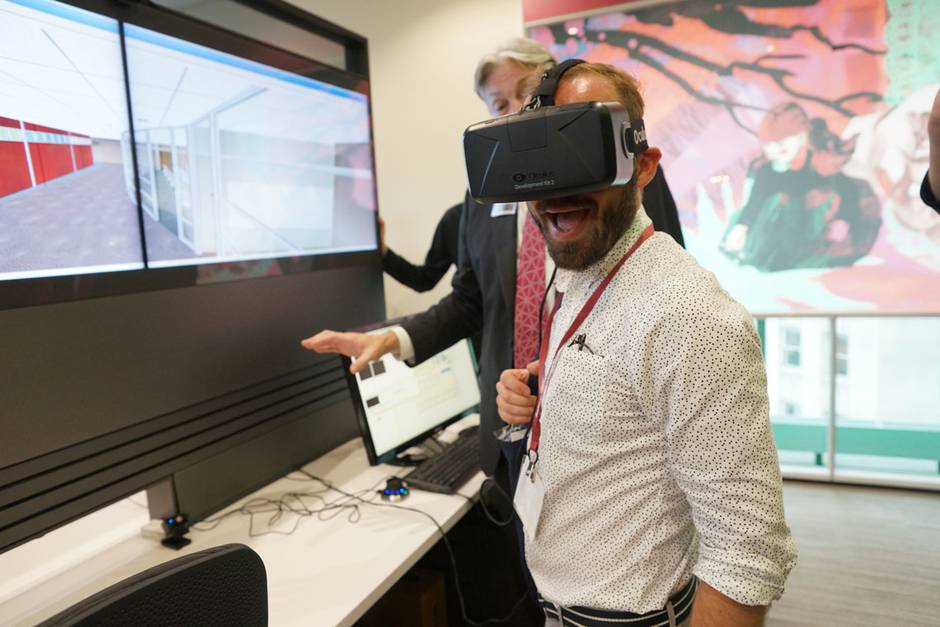 The launch of a mixed-reality app is just one of the major leaps forward in putting this technology into the hands of not just architects, designers, builders and developers but also consumers.

“iPhones and tablets are going to be huge for this technology because people are already comfortable with that and they already own it. It’s inexpensive.”

John Brown, Associate Dean of the Faculty of Environmental Design at the University of Calgary says cost has been the main barrier to adopting virtual-reality technology more widely.

“Virtual-reality simulation is increasingly being used by architects and is slowly making its way into architectural schools. But at this point, it’s mostly as research as the technology is expensive.” 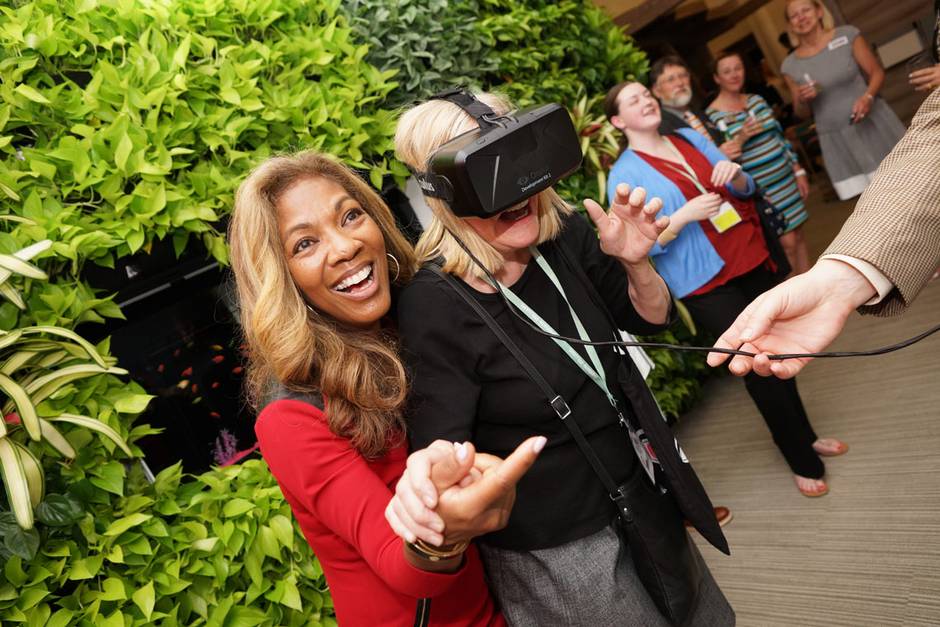 A trade-show attendee reacts to a demonstration of ICEreality. (DIRTT Environmental Solutions)

He agrees that the advent of an app and integration with smart devices could be the catalyst for mixed reality to go mainstream and start to impact on the consumer experience as well as the industry one.

“Mixed reality provides the opportunity for enhanced levels of visual simulation that make it easier for a lay audience to understand a proposed project at both building and urban scales. Conventional modes of representation either require a high level of skill to understand, such as plans and section drawings, or are overly prescriptive and allow the designer or developer to decide how much information is to be revealed, such as in a set of fixed 3D images or animated fly-through. Mixed reality allows the viewer to be more in control of what they are looking at.”

Mr. Loberg further explains the impact mixed reality could have on consumer experience.

“Developers could give the public a fully interactive view of a future development from the sidewalk, using just their smart phones. Architects could walk clients through a renovation with a tablet before it’s been undertaken, while making changes and taking measurements with a real tape measure along the way. The possibilities are huge.”

The accessibility of the technology and the practicalities of being able to work with your hands within the mixed-reality realm are both major points of difference from virtual reality.

“With virtual reality, you’re in a totally new world and you don’t exist within that world,” Mr. Loberg explains. “You can’t see your own body or your hands and some people are uncomfortable with that disembodied experience. We even have people experience something like motion sickness wearing the virtual-reality goggles. But with mixed reality, you’re present, you can see yourself, you can see your hands and you can work with your hands.” 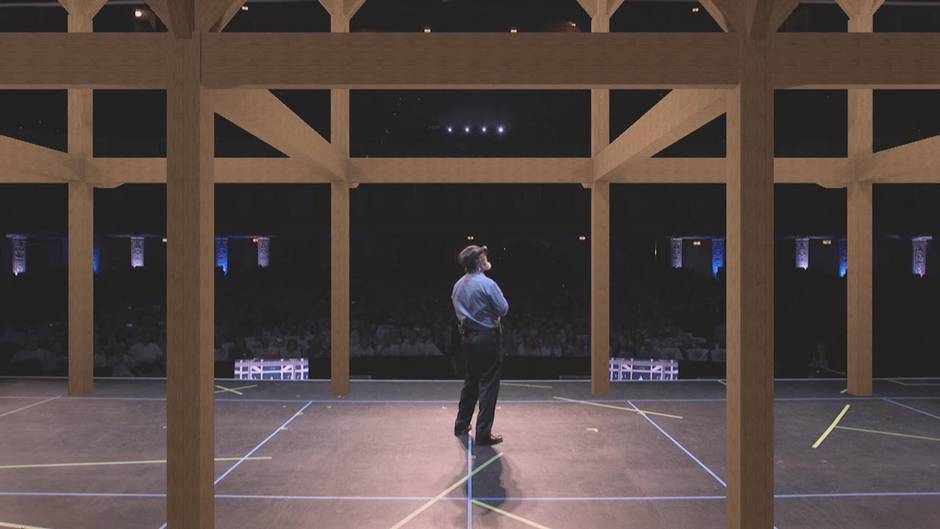 A virtual structure superimposed on a stage. (DIRTT Environmental Solutions)

As with all technology launches, timing is now critical for DIRTT to ensure their mixed-reality experience becomes widely available as quickly as possible.

“Two years ago, virtual reality was only available in the Calgary lab, and now it’s across all our locations. We’re at the same stage with mixed reality right now, but I foresee it being rolled out much faster than virtual reality was. We’re aiming to have the phone app available by the end of this year.”

“Canada’s labour pool is shrinking by three hundred per cent. We know that the number of retiring construction workers far outnumbers those entering the industry. The process of using ICEreality and prefabrication reduces the labour requirement in construction significantly. It’s also faster and provides a completely customized product. With traditional building methods, the budget it 70-per-cent labour and 30-per-cent materials. With us, it’s 70-per-cent materials and 30-per-cent labour.”

“DIRTT is a disruptor,” he continues. “We’re trying to disrupt industries where labour has traditionally ruled the day. Look at companies like Uber; they’re doing the same thing we are. They’re disrupting an industry which has remained the same way for a long time and they’re using technology to do that. The day when all developers are using mixed reality to plan and build is imminent. I’m sure of that.” 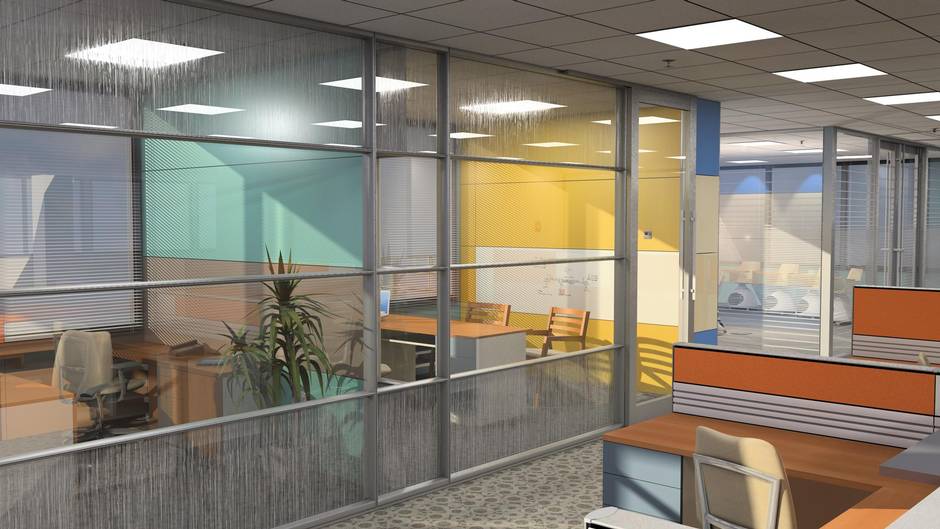 Mr. Loberg agrees. “I liken this to trying to explain to someone the impact the internet would have on their life before the internet existed. It’s impossible. Mixed reality will be the next big thing we can’t live without and not just in construction – across the board. This is going to be everywhere and in every industry in a few years time.”

A recent report from investment bank Goldman Sachs predicted that virtual and augmented reality will be an $80-billion (U.S.) market by 2025, provided the cost to access the technology becomes more accessible, and that it’s impact will be greatest in industries including engineering and real estate.

Unfortunately for DIRTT, this looks set to bring a whole new set of challenges to the table as they try to keep a tight grip over their software.

“We’ve launched a lawsuit against a large furniture manufacturer, but I can’t really say much more than that at this stage. What I will say, though, is that we’re growing quickly and a lot of people have taken notice of that. We have filed numerous patents. We will defend our intellectual property with every resource we have.”