A “hybrid” renovation has ignited a debate among residents of an Edmonton neighbourhood about preservation, adaptive reuse and whether modern architecture has a place in their community.

The future of Edmonton’s heritage homes has become an increasingly hot topic as the city looks to increase density in established neighbourhoods. The question is now roiling residents of Groat Estates, a small community west of 124th Street and south of 107th Avenue, where meticulously-restored heritage homes co-exist with fixer-uppers and sub-divided modern infills.

“There’s a value in old homes you can’t measure and there’s value to be accrued through sweat equity that you just don’t get in modern homes,” says Leslie Chevalier, a long-time resident of Groat Estates who has spent the past 16 years renovating and restoring her century-old, designated heritage home.

“When we bought this house, this area wasn’t great,” she says. “It was full of rental properties and the house we bought was run down. A local motorcycle gang used to use it as a hangout and they’d drive their motorcycles right up onto the porch. But we took a chance on it – a lot of our neighbours did the same, and together, we’ve made this community what it is today.”

The neighbourhood sits just a block outside the boundaries of the Westmount Architectural Heritage Area which means that despite having a streetscape rich in century-old homes, unless your home has a specific designation, it doesn’t have the protective zoning that Westmount offers. 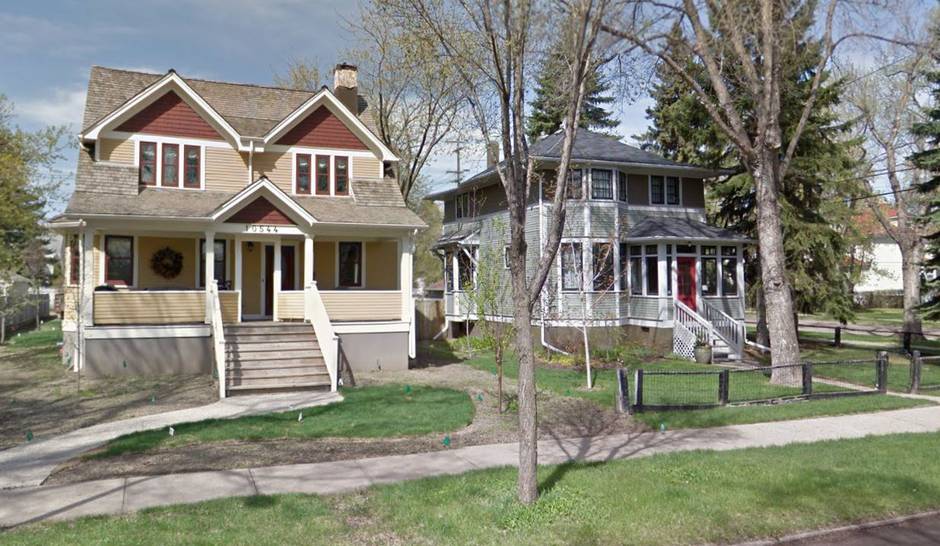 Leslie Chevalier, who lives in the house on the left, says she doesn’t mind modern architecture as long as it’s good quality, such as the renovation her neighbour Ian Evans has planned for his home, on the right. (Ian Evans)

Ms. Chevalier, an interior designer, estimates that she’s spent around $350,000 on restoring and renovating her property including adding insulation, triple glazed windows, cedar roof shingles, replicating the original wooden flooring and stripping all interior woodwork. In 2009, she even went as far as to have her home carefully moved off it’s ancient foundations to fully replace them, taking the opportunity to extend and renovate the basement.

“In that first summer, the sewer backed up three times. In its worst state, I was approached by a company looking for a home to use as the set of a haunted house,” she recalls. “But more recently, the bathroom with the roll-top bath has been used as the set of a country music video. The rest of the house was considered ‘too nice,’ which I’ll take as a compliment.”

Next door, Ms. Chevalier’s neighbour Ian Evans lives in a similar century-old property, which doesn’t have a heritage designation, and in April, he began a renovation which would challenge perceptions of what is both possible and acceptable in heritage homes. 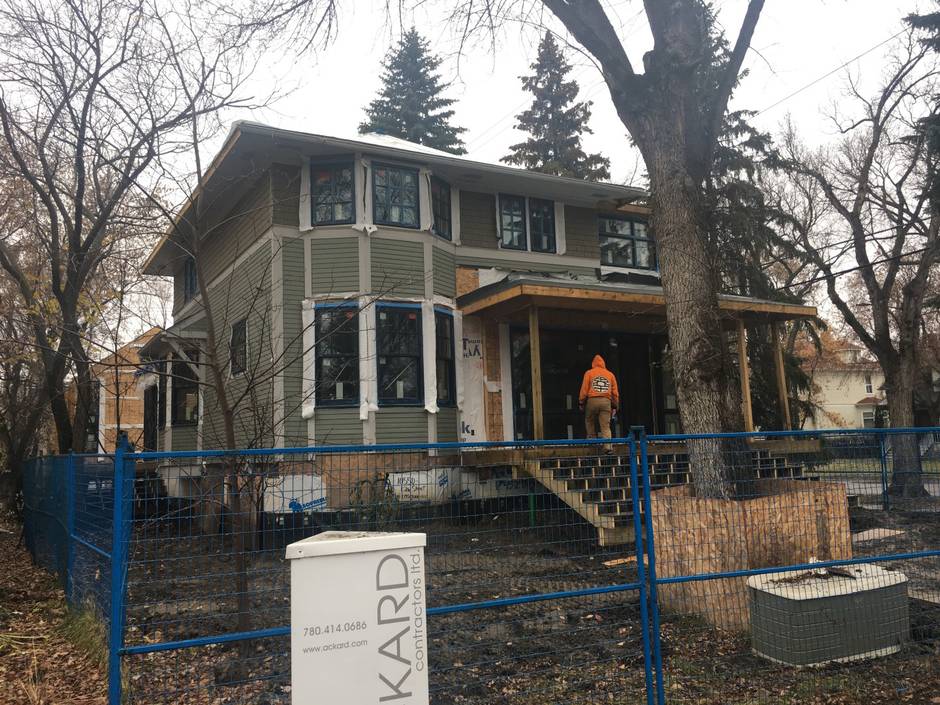 “We could have demolished the house and rebuilt it, which would have been cheaper, but we didn’t want to do that,” explains Mr. Evans, a Principal with Hodgson Schilf Evans Architects who has lived in the house with his family since 2004. “There is value in what is there. But the foundation needed to be replaced and we felt the house was too small. We decided rather than adding something ‘faux heritage’ that we would add something modern.”

In addition to a large contemporary extension, Mr. Evans and his wife, Laurie, who is also an architect, have also taken the opportunity to re-insulate the home, add a heat recovery system, replace all internal mechanics and add a double garage and garden suite. Upon completion in spring of 2017, they will have nearly doubled the square footage of their large corner-lot property.

“The side nearest to Leslie’s house will retain its heritage look to complement her home. That was important to us; that the house continues to fit in with the rest of the older properties on the street. The other side, the side on the street corner, will have a contemporary look with modern materials and large windows.”

Mr. Evans’s sensitivity to the context of his home has ensured his renovation has so far been well received by his neighbours, including Ms. Chevalier.

“I like it. I’d far rather see good contemporary over fake historical any day. And it’s retaining the character of the property, which is important,” she says.

Mr. Evans admits the renovation has been “a challenge,” but he’s hopeful that it will showcase some of the more creative ways heritage homes can be updated to meet the expectations of 21st-century living.

“The problem is that older properties often aren’t very comfortable to live in. They’re smaller, they can be cold, the room dimensions aren’t what people want today. This is a bit of an experiment for us but we hope it turns out well and people are interested in it.” 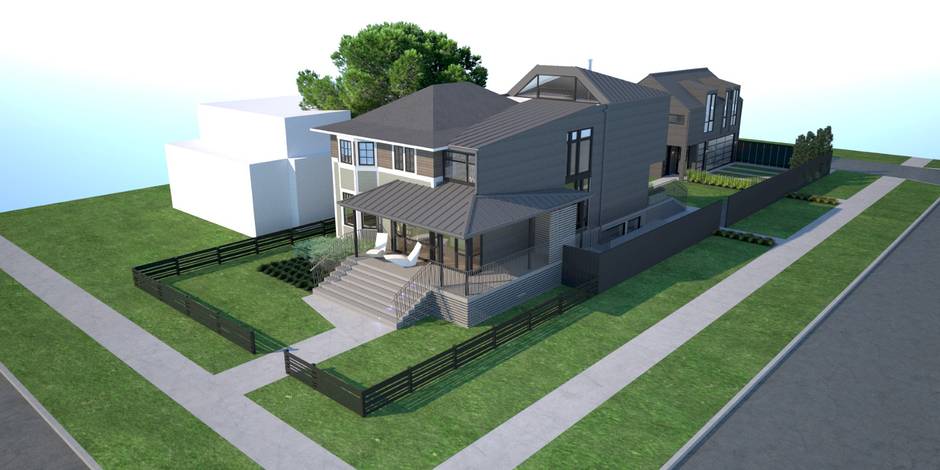 Erin McDonald, chair of the Edmonton Historical Board, which advises the city on heritage issues, says “adaptive reuse renovations” such as Mr. Evans’s are “not perfect and not the best solution, but it is a way to make these properties work in the 21st century.”

For Mr. Evans and Ms. Chevalier, a renovation that is sensitive to its streetscape and retains the character of the home is preferable to the infill development which, they say, is fast encroaching on their community.

“I’m not against modern architecture as long as it’s good-quality architecture like our neighbours are doing. The problem is that a lot of infill we’re seeing here isn’t,” Ms. Chevalier says. “There’s infill housing in our neighbourhood which has an exterior of corrugated iron and blue stucco. It sticks out like a sore thumb.”

“The older homes on our street all have porches. People sit on their porches in the evening and it creates a sense of community. They’re building six skinnies on the street behind ours with rooftop patios overlooking our yard. Rooftop patios aren’t adding to the sense of community in this neighbourhood. There’s no social interface there.” 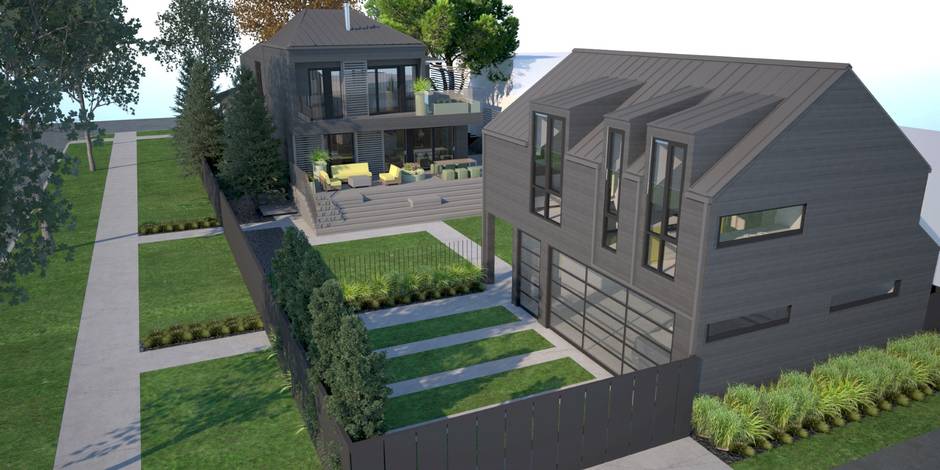 A rendering of the rear of the renovated home. (Ian Evans and Laurie Ross)

Mr. Evans agrees. “People in this neighbourhood feel they’ve taken a chance on the area and made it the community it is and we’d like to protect it,” he says. “The city doesn’t want to hear it because they’ve earmarked the whole area for densification because of the the LRT line.”

According to Ms. McDonald, the residents of Groat Estate aren’t the only ones complaining.

“The city wants to encourage more families into the inner city to curb Edmonton’s urban sprawl,” she explains. “Eighteen months ago, the city introduced the Mature Neighbourhood Overlay, which was intended to densify central areas and has encouraged lot splitting. But they’ve been getting a lot of push back from established neighbourhoods.”

She believes the answer could lie in a “neighbourhood-by-neighbourhood approach to zoning,” which would be dependent on a comprehensive heritage inventory. Currently, due to funding and resource issues, “only around 10 per cent” of the city has been mapped in the heritage inventory since work started on it in 1992.

Recently, Ms. Chevalier’s other neighbour put their home up for sale. It’s also a 1912 heritage home and, despite the $699,900 price tag, many residents are concerned that developers are circling.

“That’s the problem in neighbourhoods with high lot values; no matter what the price of the home, if owners sell, there’s always a risk.”