In a city known for endless urban sprawl, Calgary’s core has always struggled to support an urban community. Past five o’clock, the heart of downtown west of Centre Street is a ghost town despite being just minutes from vibrant communities such as Kensington, Inglewood and the city’s network of busy riverside pathways.

But a $1-billion redevelopment of the city’s historic Eau Claire Market Mall and the development of surface parking lots immediately to the west of the Mall – both slated for mixed-use urban villages and both hoping to break soil this year – could change that.

“Calgary is the opposite to Vancouver in that it has lots of people working in its core but it struggles to hold a critical mass after working hours,” explains Rosanne Hill, Managing Director of Harvard Developments, the company behind the Market Mall redevelopment. “Our intention is to create a new downtown community with residential units to house the critical mass that will eat, shop, work and be entertained there.”

Harvard Developments has owned the 2.1-million-square-foot site for nearly a decade. Its redevelopment was slated for 2008, but plans were shelved in the midst of the global recession.

“The timing wasn’t right,” says Ms. Hill. “With a project of this scale, timing is important.”

Now, with Alberta’s building sector feeling the impact of a depressed oil and gas industry and the infill around the site being “gradually elevated” by other new residential developments, Ms. Hill believes “the timing is perfect.”

Harvard Developments is also hoping Eau Claire will be one of the first stops on the new Green Line LRT; the exact location of which will determine whether or not they add a number of town houses to phase two of the project.

The incumbent Eau Claire Market Mall itself isn’t particularly old; the $43-million building opened in 1993, and it was hoped it would herald in a new era for the city’s downtown core – Calgary’s very own Granville Island. Sadly, the planning, architecture and design of the mall fell short of its lofty mission.

“There’s no doubt that the site has a mottled history,” agrees Ms. Hill. “It didn’t work and Calgarians turned their backs on it. But the city’s a very different place now and we think it’s ready to become what it could be.” 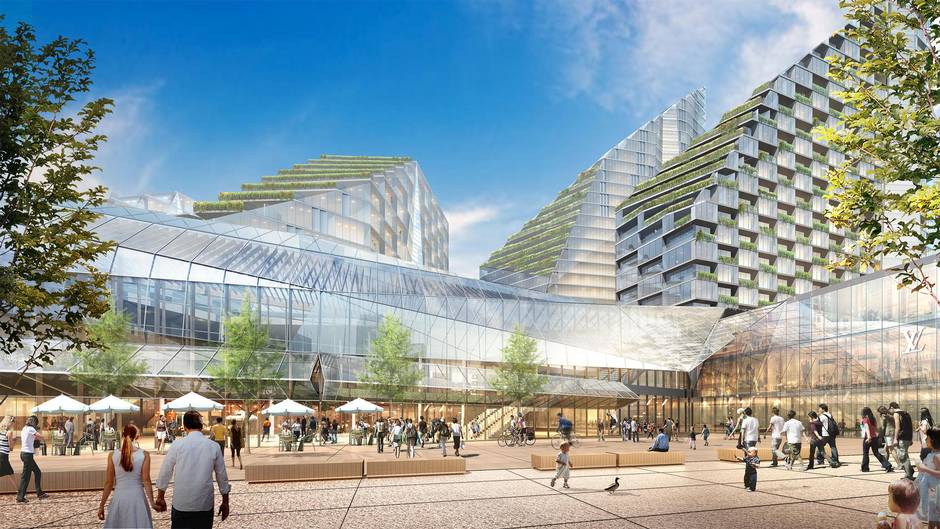 The Eau Claire project with its residential units, office and retail space, supermarket and hotels is expected to change the face of the Calgary’s core. (Perkins+Will /Atchain)

“Winter city planning is pretty out-dated; the last study undertaken on plus 15’s was back in 1986,” he explains. “That’s not to say plus 15’s don’t have their place, the original development certainly should have had one, but you need to utilize and interact with outdoor space, too. You can’t just internalize everything.

“I’d even argue that Calgary isn’t a true winter city: The climate can be temperate here because of chinooks and the large amount of sunshine. You have to consider that in urban planning.”

He continues: “Eau Claire Mall was built using old-school winter city design: it’s isolated from its surroundings by huge parking lots, it faces away from the public plaza and has a lot of dead space around its edges. The overall effect is very uninviting. It’s poor urbanism.”

“The traditional winter city approach is certainly one of the reasons Eau Claire Market Mall didn’t work” agrees Ms. Hill, “and we’ve considered that in the redevelopment. The new site will be internally connected to downtown with a plus 15, but also externally connected to it via outdoor spaces, pedestrianized routes and the existing public plaza.

“We’ve taken care to minimize shadowing on the public plaza,” Ms. Hill continues, “because we have a vested interest in ensuring it’s inviting all year round.”

West Eau Claire will also embrace new-school winter city planning with its own public plaza, which will be at the heart of the development.

“Eau Claire West will be a welcoming and civic-minded neighbourhood,” says James Midwinter, executive vice-president at GWL Realty Advisors who are developing the site. “It will provide a pedestrian-friendly connection between the downtown business hub and the outdoor amenities of the Bow River trail system and a large public plaza, designed to accommodate a variety of events and activities inviting social interaction.”

Mr. Midwinter believes the collective efforts and timing of both developments will transform Calgary’s core.

“Creating a multidimensional, vibrant and exciting community is dependent on a large number of people living and working in the area,” he explains. “Both developments upon completion will be home to several thousand people who will bring to life an area that hasn’t thrived in the past due to the relatively small number of people living there.” 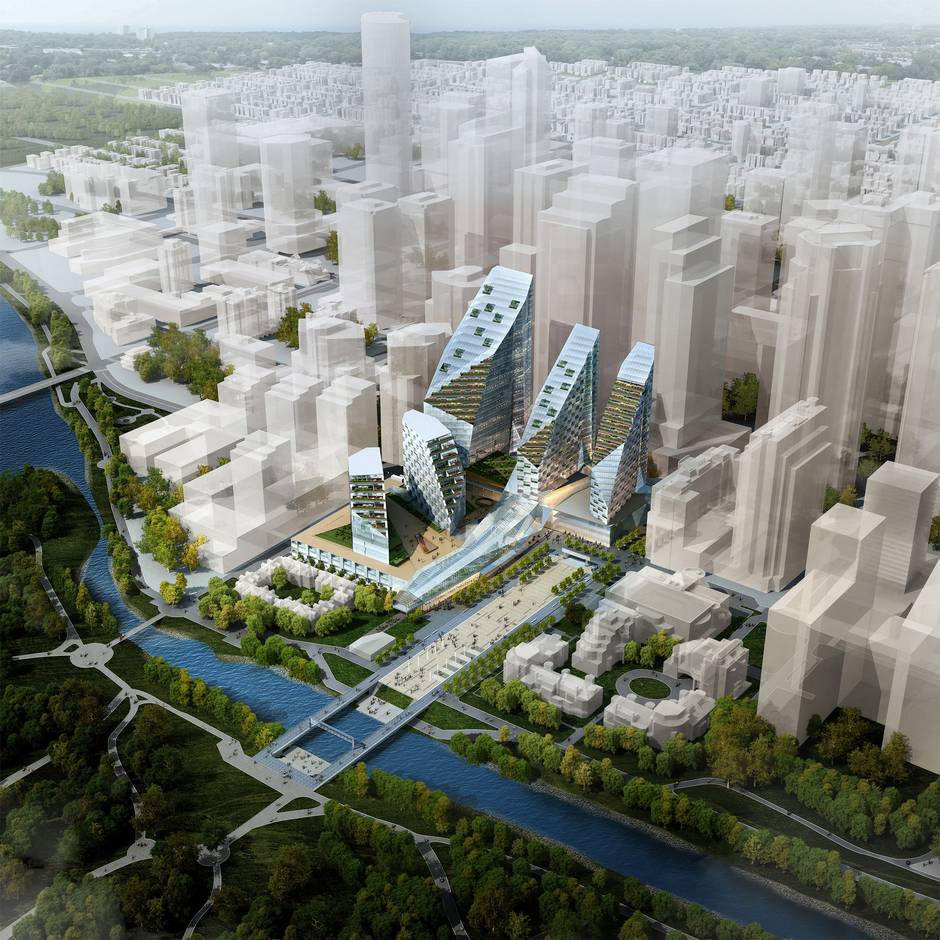 Maggie Schofield, executive director of the Downtown Association, says downtown businesses are eager for the redevelopment to commence. “It’s been on the books for a long time and it could be a great stimulus for downtown.”

Likewise, residential developers such as La Caille who currently have two towers in the Eau Claire neighbourhood and one under construction are keen to see the area’s resident numbers increase.

“Density in Eau Claire isn’t at a tipping point yet, but the developments on the horizon could get us there,” says marketing manager Vicky Livaditis. “There are pockets of micro-communities appearing but we need to join the dots, there needs to be a focal point.”

Ms. Livaditis says the timing is “a little out” for these projects to help sell the remaining units in La Caille’s Vogue condo tower, which is due for completion in a year’s time, “but you never know, they’re pretty exciting developments and people will want to live close by.”

Could the collective draw of Eau Claire Market Mall and West Eau Claire help the area finally fulfill its promise?

“I think it has the potential to be our Lonsdale Quay rather than Granville Island,” says Ms Schofield thoughtfully, “which would certainly be a big improvement.”