For those actively shopping Calgary's resale housing market or those thinking about testing the water, there's no need to make a hasty decision.

The vibes in the current oil price-splattered marketplace would suggest there is little urgency to make what, for many, will be their biggest financial decision.

"Improved selection in some segments is giving buyers the opportunity to be discerning about their purchase decisions," Ann-Marie Lurie, chief economist for the Calgary Real Estate Board (CREB), says.

Basically, if they don't have to buy or sell right away, then just watch and wait. The economic turnaround won't happen overnight.

This year's market is much cooler than a year ago, but then again the economy is cooler, as well, industry experts say.

And the gap between the asking price and the final selling price has increased by 1 per cent year over year but remains a solid 97.5 per cent, while the inventory of available homes has climbed to slightly more than 5,500 from just over 3,800 for the comparable January-August period in 2014.

"Comparing the market today to last year at this time, we are down substantially, but much of that is because 2014 was a tremendous year," Ted Zaharko, broker/owner of Calgary-based Royal LePage Foothills, says. "But comparing today to a stretch a couple of years earlier, this market's not that bad."

Which buyer segment has been hurt the most? Mr. Zaharko says it's those buying at the upper end who are "cautious and scared compared [with] the average Joe buying under $500,000."

It's this part of the consumer market that holds many of the first-time buyers who, he says, are still buying – if they are comfortable with their job situation.

Ms. Lurie says first-time buyers are not only looking at a struggling economy that has weakened overall consumer confidence, but also at a market with more product to choose from – everything from apartments to attached and detached homes. And for those living in rental accommodation, the slowdown has reduced the upward pressure on rental rates and increased vacancy rates.

"For many renters, this reduces the urgency to consider ownership, particularly during a time when there continues to be uncertainty regarding employment status," Ms. Lurie adds.

Then there is the direction and level of interest rates to have to be considered. Ms. Lurie says that right now they're low and favourable, but are being outweighed by the impact of the overall economic anemia.

"Further to this, rates are expected to remain low for some time, limiting the urgency among potential buyers," she adds.

Taking a closer look at what the Calgary market is doing, CREB reported the 1,643 sales in August was a decline of 27 per cent from year-ago levels and 12 per cent below the 10-year average.

And while sales-to-listings-ratio declines were across the board for the month, homes in the higher price ranges took the biggest hit.

Year-to-date new listings in the $600,000-plus category increased in share of activity compared with last year. However, sales in this price range represented 18 per cent of all sales, down from nearly 20 per cent last year, CREB figures show.

Mr. Zaharko, a veteran of the Calgary real estate ups and downs, takes an optimistic view of the marketplace and the woes of the energy sector.

"I don't believe in all this oil patch doom and gloom. There is a political resolution to these issues," he says. "We all know the oil patch is not going away and that it will recover and the real estate market will come back – as always." Calgary hunts for signs of a real estate revival 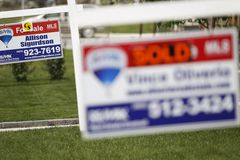