Canada Mortgage and Housing Corp. said Thursday that it is maintaining its "red warning" for the country's real estate market as a whole, with high prices in and around Vancouver and Toronto among its top concerns.

The agency's decision to issue the red alert in its overall assessment for the Victoria region has been months in the making. Under the agency's analysis that looks for troubles in housing, it rates 15 metropolitan markets based on weak (green), moderate (yellow) or strong (red) risk signals.

Rob Carrick: The dark side of the housing boom

"Evidence of problematic conditions has increased in Victoria since the previous assessment due to moderate evidence of price acceleration and overvaluation," CMHC said.

CMHC issued its first national warning in October, cautioning that with many suburbs near Vancouver and Toronto already seeing prices spike, pressure is spreading even farther out as some buyers search for homes in bedroom communities such as Abbotsford (70 kilometres east of Vancouver) and Barrie (90 kilometres north of Toronto).

Calgary is a market on the mend while warning signs are prevalent in Victoria and five other markets, CMHC said. "Evidence of problematic conditions has decreased in Calgary since the previous assessment as some housing markets in oil-dependent centres are now rebalancing," the agency said. "Strong evidence of problematic conditions continue to be detected in Vancouver, Toronto, Regina, Saskatoon and Hamilton."

In 2016, home prices slipped slightly in Saskatoon while they were flat in Regina.

Foreign purchasers who closed deals accounted for 6.7 per cent of Metro Vancouver's total number of residential transactions between June 10 and Nov. 30, compared with 4.2 per cent in the Capital Regional District, which includes Victoria, according to the latest data from the B.C. government.

"There is a foreign buyer component in Victoria as well – it is quite low. The tax does not apply to Victoria," CMHC senior market analyst Eric Bond said during a conference call Thursday.

Industry observers also say some homeowners in Vancouver (where prices have declined from record highs in the first half of 2016) are cashing out and moving to less-expensive B.C. markets such as Victoria and Kelowna.

"In terms of home buyers from Vancouver buying in Victoria, this is something we are looking into. We will be publishing more research on that later this year and certainly it's a factor as well," Mr. Bond said.

Home prices in the metropolitan areas of Vancouver, Victoria, Toronto and Hamilton are beyond what migration, employment and income can support, said CMHC chief economist Bob Dugan. "There seems to be a fanning out of those price pressures and we published a report a couple of days ago that put a little more sort of meat around this for the Toronto area," he said.

Some industry observers say the impact of B.C.'s foreign buyer tax has spilled over into other markets, with an influx of purchasers into places such as Victoria and Toronto. But Mr. Hogue is awaiting more data.

"Prior to the implementation of the tax in August, home prices were rising at an accelerated pace in areas outside Vancouver," he said. "The phenomenon of other markets heating up predates the tax."

Last October, the federal government implemented measures to tighten mortgage lending rules, such as a new standard for gauging whether buyers can handle an eventual increase in interest rates. 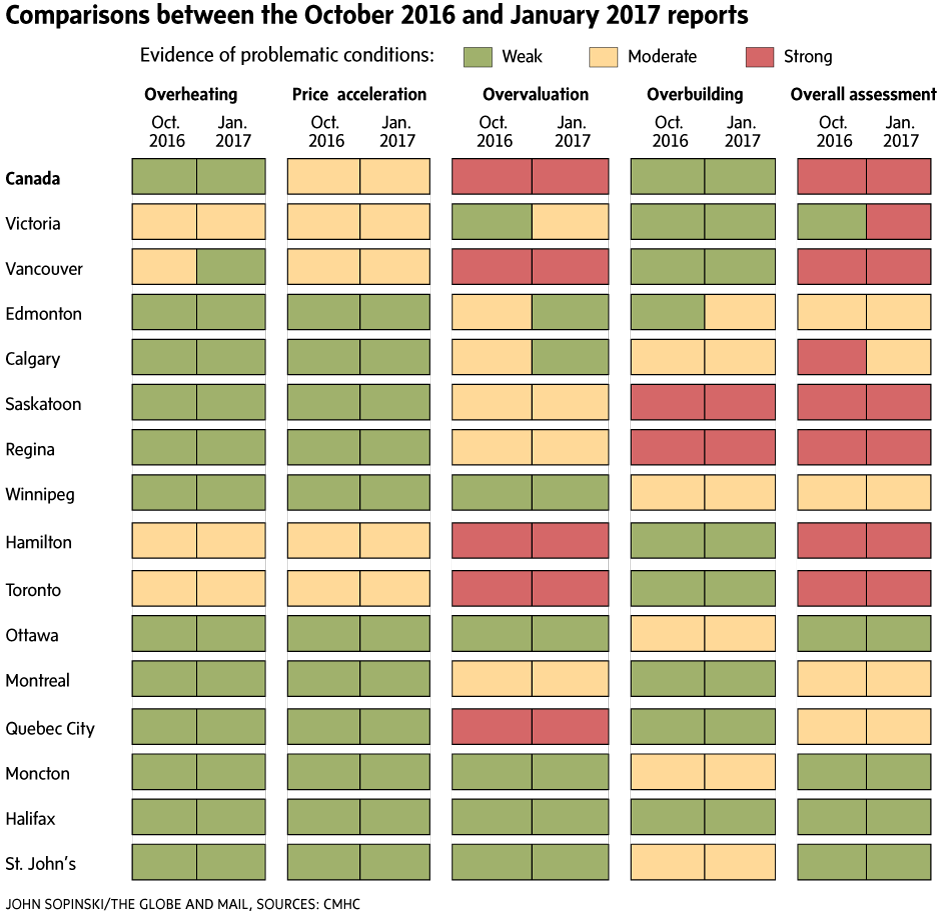 Higher down payments needed to battle housing risks: CMHC CEO
November 18, 2016
CMHC hiking mortgage insurance premiums for third time in four years
January 17, 2017
Follow Brent Jang on Twitter @brentcjang
Report an error Editorial code of conduct
Due to technical reasons, we have temporarily removed commenting from our articles. We hope to have this fixed soon. Thank you for your patience. If you are looking to give feedback on our new site, please send it along to feedback@globeandmail.com. If you want to write a letter to the editor, please forward to letters@globeandmail.com.
Comments