The current vogue for using high-tech wood products as a green building material has spawned a flurry of proposals for "timber towers."

But some new concrete low-rise projects in the Vancouver area seem to be going against the grain. Developers, like the I4 Property Group in North Vancouver whose 700 Marine project is scheduled for completion in July, and Cressey, whose new four-storey Arbutus Ridge project has sold over 50 per cent of its 49 units since it went to market in early May, are opting for concrete, as opposed to wood-frame, construction.

Proponents of concrete cite advantages that include acoustic privacy, building quality and return on investment. Its "green" qualities include durability and energy efficiency.

But the concrete low-rise is far from the industry norm, since a wood frame is generally a cheaper option both for the builder and the consumer. It's a popular building form in cities like Barcelona – and it's slowly gaining ground in Vancouver.

While the 26-unit project is an island in a sea of wood-frame condos it's one that attracts a discerning buyer.

"For the West Coast climate," explains Mr. Thomas, "wood is less than ideal as a building material since it expands and contracts. Concrete is more durable."

In a typical mixed-use development, for instance, where the ground floor is usually concrete, "wood adjacent to concrete foundations – well that's going to cause some problems."

He contends that this project attracts a "wiser clientele who are more sophisticated and prepared to pay extra to have peace of mind and quality." He also notes that concrete buildings depreciate less than wood frame.

Acoustic issues are also paramount in buyer's minds, he contends, recalling a wood frame project he represented recently where, from the ground floor he could hear "every word buyers said" at the upstairs sales centre.

In a typical wood frame building, he notes, floors might be concrete but in reality are only a "thin membrane over top of wood."

In a special "why buy concrete" addendum to the project website, other advantages are cited, including more allergen-free ventilation than in mould-producing wood frames, as well as structural safety, lower repair and maintenance costs and a greater sense of comfort and privacy.

"There's an emerging market for the concrete low- and mid-rise," contends Mr. Thomas, "especially on Vancouver's West side, North Shore and at UBC."

"People get enamoured with fancy taps and display centres – but the important thing is the structure, and concrete is built to last."

"Building with concrete gives you more flexibility," notes Hani Lammam, vice-president of Cressey Development. "A four-storey wood-frame structure is forced to stack. The detailing restricts you because you have to protect it – which is not an issue with concrete."

It's also a better investment for the buyer, he contends. "The advantages of concrete are undeniable. There are higher construction costs but it's a premium product and has a higher resale value. It stands up to the test of time."

Furthermore, he notes, " In a wood frame building, the wood shrinks and you have to deal with settlement, leaks and cracks."

He concedes that wood "can be durable if protected, but these wood frame buildings don't seem to last as long. Maintenance is difficult in multifamily settings. It's hard to motivate owner groups to do the maintenance. A concrete building form is simply easier to maintain."

"One of the major reasons we choose to build in concrete," explains David Evans, development manager of Cressey, "is that the experience of the homeowner living there is better. The benefits of concrete construction that the end user enjoys are sound attenuation and durability." He also notes that concrete, famously called "the marble of our time" by Arthur Erickson, allows "a certain freedom of architectural expression."

And with the average size of units 1,200 square feet – something that's had to find in a concrete condo in Vancouver- Mr. Evans affirms that the Arbutus Ridge site was ideal. "We needed to be within an established neighbourhood – where real estate buyers would recognize value and have the wherewithal to purchase units with high end finishings and appliances – finishings one would expect in single family home - but in a condo."

Indeed many of the purchasers to date have been empty nesters downsizing from the plethora of 2500 square foot single family homes in the area, looking for both the convenience of condo living married to sound construction values.

"Given their druthers everyone would prefer a concrete building," says developer Michael Geller, whose 2004 concrete mid rise at SFU's Univercity was a local pioneer of the form. "It feels more solid."

Mr. Geller says that he predicted a local trend toward mid rise concrete buildings a few years ago, as an alternative to the typical tower and podium Vancouverist form of densification – one that offered more intimate scale and massing.

"Although the concrete low-mid rise was common in Toronto and Montreal," explains Mr. Geller, "15 years ago it was simply not done in B.C. – mainly because the local construction industry was not familiar with it and so the premium was quite high."

But as the local industry becomes more familiar with the form, he contends, the premium for the concrete low- and mid-rises has dropped, making it more attractive to developers.

"There are still a lot of people who are reluctant to pay a high price for a wood-frame building," he notes, "and in Vancouver when land price alone is almost equal to construction price – then it makes more sense to pay the additional premium for concrete construction."

Investor breaks even on Vancouver condo sale
May 17, 2013 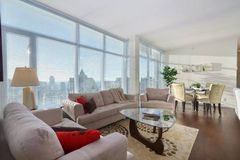 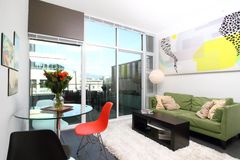 At Vancouver’s ‘Cold Harbour’ a neighbourhood hollows out
May 3, 2013 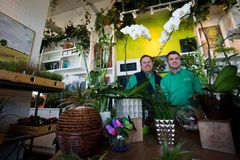