For Zinc Development's latest infill project, it's not enough just to design contemporary homes, but also insist they be surrounded by alfresco entertaining areas, from private outdoor space to a beloved public park.

Mid-October, sales will commence for 57 townhouses – all above grade with backyards or rooftop terraces – in a four-storey structure dubbed 35 Wabash after its address across from Sorauren Park in Roncesvalles Village.

"Although it's a condominium, they're really townhouses and they all have outdoor space," president Ken Zuckerman says.

"There's a need for this type of living, because with the way house pricing have gone in the City of Toronto … people can come in at a nice price and have a lot of attributes of a house and also some that are better."

Outdoor spaces for these suites – eight one-level flats and 49 two-storey models – will range from 300 to 1,300 square feet.

"Going to a park is obviously really important and it's a great attribute to the project, but also is being able to just barbecue in your backyard, having friends over, having a beer and chilling out in your own space," Mr. Zuckerman says.

"For a young family, where do you take your kids if they want to play a little bit? They can go in their backyard in this condominium."

Unlike other townhouses projects, this brick-and-glass structure by RAW will provide a Zen garden and a yoga and fitness facility separated by a wall of pivoting doors.

"A lot of people today are participating in yoga because our lives are pretty pressure filled – we're connected to iPhones all day and all night – so it's pretty popular and it's a unisex [activity]," Mr. Zuckerman says.

"It can also double as other things, maybe people can book it out as a room for parties, so it's multifunctional."

Other needs can be served by popular restaurants, cafes and streetcars operating on Roncesvalles Avenue or sports fields and farmers' market just beyond the front lobby.

"Roncesvalles is a really up-and-coming area and the location is fantastic," Mr. Zuckerman says.

"It's across from Sorauren Park and right beside the [Charles G. Williams] children's park …, which is the other thing that really attracted me to the site. It's a community-based park with so many toys and they stay there, no one takes them."

Nearly as valuable as the pastoral setting is a fuss-free alternative from million dollar estates nearby, many of which are more than a century-old.

"It's brand new, it's contemporary, so you don't have to renovate it, you won't get a leaky roof or have to redo your basement, so it has all those great conveniences," Mr. Zuckerman says.

"The other important thing about this project is the smallness of it. It's only a four-storey building, not a tower, not a mid-rise, so it's a smaller, more intimate project and people like that."

Buyers can chose from one- to three- bedroom plans, including some with street-level entrances and the rest entered via interior corridors served by elevators.

"In a stacked townhouse project, you leave the garage, go outside and walk up to your unit, whereas this allows you to park underneath, come up in an elevator to the lobby and go to a hallway to your two-storey unit," Mr. Zuckerman explains.

"So this is twist on that it that provides convenience."

Occupancy will begin 2017 and monthly fees will be about 30 cents per square feet. Parking will cost extra. 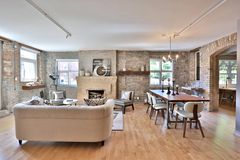 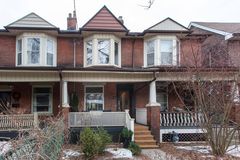