It's a tiny and very expensive slice of cottage country, but Pointe au Baril in Ontario's Georgian Bay archipelago is a hot market this year.

Real-estate agent Stewart Metcalfe of Colliers International has sold two properties so far in July and another deal is brewing.

"Right out of the gate we've had a strong season," he says. "The market's flying this year."

In Muskoka, the market is more quirky. Agent Paul Crammond of Chestnut Park Real Estate Ltd. says the middle market is very mushy. By middle, he means the segment from $1-million to $2.5-million.

Cottages on the more entry-level lakes seem to be trading hands, he says, and the prices at the luxury level have recovered from their malaise after the financial-market turmoil in 2008.

"Definitely the high-end market has started to come back."

For the year to date, Mr. Crammond calculates that the number of sales on the Muskoka big three lakes – Joseph, Rosseau and Muskoka – have dropped 19 per cent compared with the same period last year.

But sales for the surrounding region – which takes in areas such as Haliburton, Huntsville, Gravenhurst and Lake of Bays – have jumped 14 per cent so far this year compared with last year at this time.

Mr. Crammond says the statistics are always hard to interpret but one explanation he has come up with is that the buyers looking at the prime Muskoka lakes tend to be move-up buyers and they are very particular.

"Move-up buyers are waiting for the perfect property to come up," he says. "They're not as driven to get into the market."

The confidence among first-time buyers seems a bit weak, he adds. Many seem to be looking for more certainty in prospects for the broad economy and their own circumstances.

Broker Anita Latner of Anita Latner Realty Inc. is finding the Muskoka market soft this year. She says the area is very sensitive to the action on Bay Street and Wall Street.

In Georgian Bay, one of the properties sold by Mr. Metcalfe changed hands for more than $2-million. The other sold for approximately $700,000.

Mr. Metcalfe also knows of a couple of others sold by other agents. The activity marks a strong shift from last year.

Mr. Metcalfe specializes in this little niche market of islands in the back channels spreading out from Pointe au Baril's storied Ojibway Club. Properties here often include family compounds or luxury cottages on private islands; as a result, prices above $2-million are not unusual.

The properties that line the main channels tend to be less expensive because of the heavier boat traffic. In 2011, only one place sold in the desirable back channels, says Mr. Metcalfe.

From talking to colleagues, he knows the same phenomenon has been repeated in havens such as Sans Souci, Go Home Bay and Honey Harbour, he adds.

"All up and down the bay you would get the same message," he says.

Mr. Metcalfe says part of the reason for the rebound is that asking prices have dipped about 10 per cent as sellers become more realistic. Rental cottages are also in great demand, he adds.

It seems the strength of the Canadian dollar compared with U.S. currency is tempting to some Americans, who are putting their places in Northern Ontario up for sale. In the Temagami area, for example, cottagers say more of their American neighbours are putting out "for sale" signs.

In Georgian Bay, Mr. Metcalfe says, the American buyers are not appearing in large numbers but he hasn't seen a lot of sellers either.

"Georgian Bay is a pretty conservative place," he says.

Families tend to pass their cottages down from one generation to another and very few buyers purchase a cottage with the intention of making a profit and then selling after a few years, he adds.

In Muskoka, Mr. Crammond believes that the dwindling number of American buyers has dragged prices down in recent years. Before the 2008 financial crisis, many Canadian expatriates were purchasing in Muskoka with the U.S. dollars they were earning in other countries.

But with the two currencies at similar levels, that U.S.-dollar advantage has vanished.

"We're not seeing the Americans buying – and they haven't bought in any numbers in years," says Mr. Crammond. "It makes a huge difference." 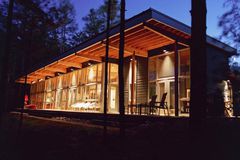 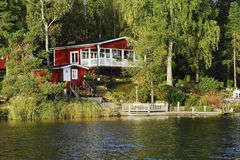 Luxe cottage update is a lakeside mix and match
June 20, 2012 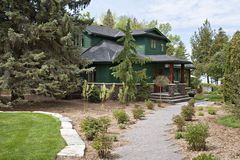